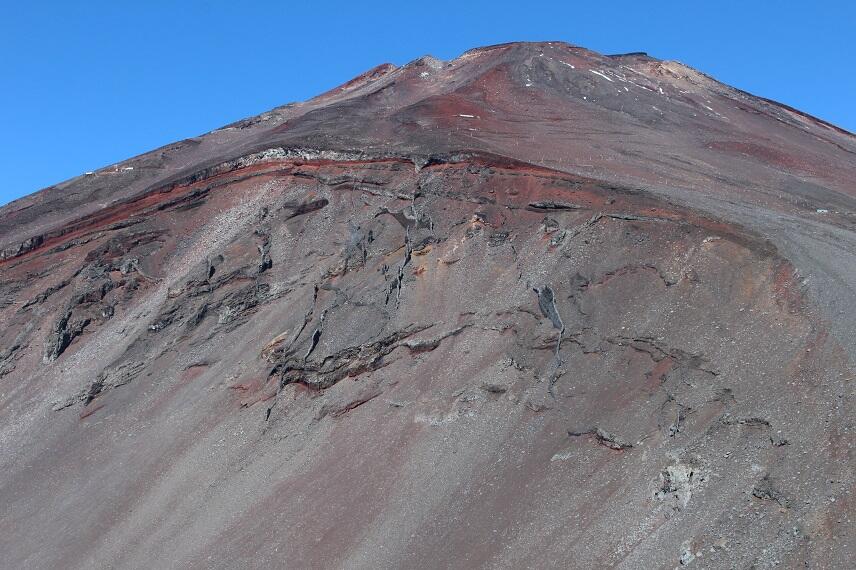 The Hoei crater of Fuji Volcano

Mt. Fuji is not only the highest mountain in Japan, but also one of the largest active volcanoes in Japan. This crater on the southeastern flank was formed during the 1707 Hoei eruption, since when the volcano has been dormant. The crater wall exposes the piles of volcanic ejecta and dikes. The volcanic ejecta mainly consists of agglutinates (welded fall deposits) interspersed with thin lava flows and fallout scoria. See Yamamoto et al. in this issue for the details of the stratigraphy.

(Photograph and caption by YAMAMOTO Takahiro)

The younger Fuji pyroclastic fall deposits since 1,500 cal BC have been re-described with new geochemical data from representative outcrops. And, we measured minimum magma volumes for the fall deposits using the relationship between the area enclosed within an isopach and its thickness. From 1,500 cal BC to 300 cal BC, sub-Plinian eruptions took place at the summit and flanks, and ejected the S-10, Osawa, Omuroyama, S-13, S-18 and S-22 Pyroclastic Fall Deposits whose minimum volumes were about 1 × 10-1 km3 DRE (dense-rock equivalent volume). From 300 cal BC to 1,100 cal AD, all eruptions occurred at the flank, and produced the Gotenbaguchi 1 to 7, Subashiriguchi-Umagaeshi 1 to 7, Yoshidaguchi 1 to 4, Futatsuzuka and S-23 Pyroclastic Fall Deposits, etc., whose minimum volumes were less than 2 × 10-2 km3 DRE. Our revised stratigraphy has suggested that the Subashiriguchi-Umagaeshi 6' Pyroclastic Fall Deposit and the Takamarubi Lava Flow are the products of the Jyohei eruption (AD 937).

Postglacial deposits in four boring cores obtained from the Kujukuri Plain, central Japan, in 2015 were studied with grain size analysis. The results are discussed in terms of sedimentary facies. The majority of transgressive incised-valley deposits consists of mud and coarsens upward to lower shoreface deposits of very fine to fine, well-sorted sand. The proportion of medium, coarse and very coarse sand increases in upper shoreface deposits. The foreshore, backshore and dune deposits consist mainly of very fine and fine sand. The predominance of well-sorted sandy deposits is attributed to the supply of sand reworked from sandy and semi-consolidated Pleistocene nearby.