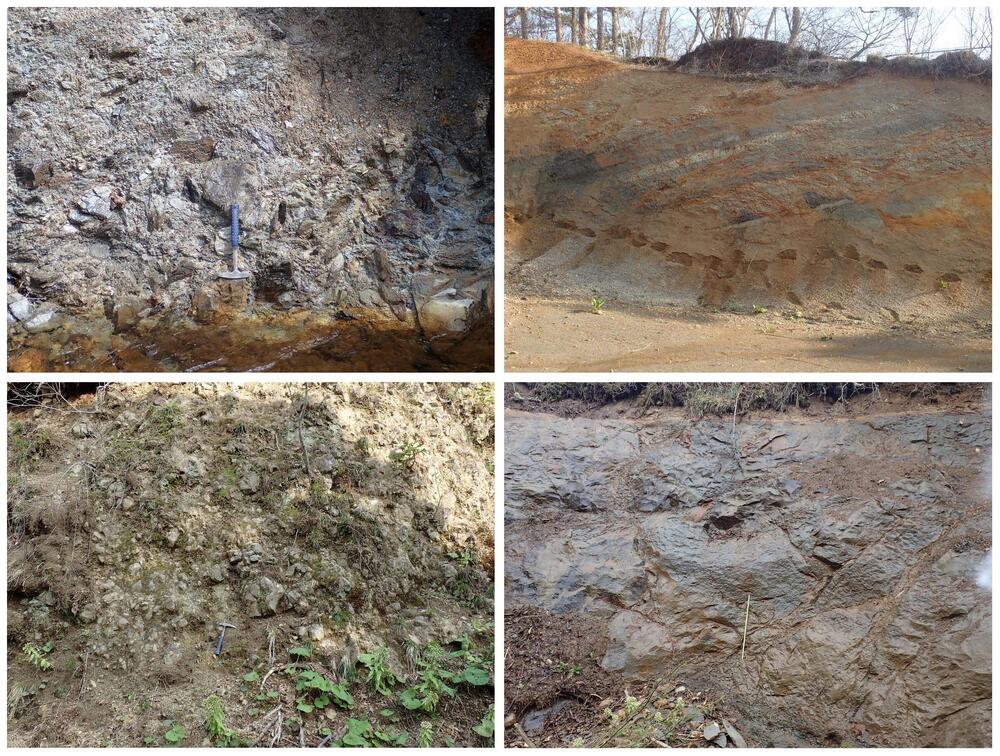 The Lower to Middle Miocene sedimentary and volcanic rocks are widely distributed in the eastern part of Shimokita Peninsula, northeastern Aomori Prefecture. These strata are terrestrial and shallow to deep marine deposits from sedimentary basins that developed due to the subsidence associated with the opening of the Japan Sea.

(Photograph and caption by KUDO Takashi)

Chronostratigraphy of the Lower to Middle Miocene in the eastern part of Shimokita Peninsula, Northeast Japan

Chronostratigraphy of the Lower to Middle Miocene Sarugamori, Takahoko, Tomari and Gamanosawa formations in the eastern part of Shimokita Peninsula, Northeast Japan was constructed based on geological survey and microfossil biostratigraphic analysis. The diatom zone NPD4Ba and the calcareous nannofossil zone CN4 are identified in the Gamanosawa Formation and the diatom zones NPD4A, NPD4Ba, NPD4Bb and the calcareous nannofossil zone CN5a are identified in the upper part of the Takahoko Formation. The age of each formation estimated from litho- and biostratography is as follows; Sarugamori Formation: between 17 Ma and 15 Ma, Takahoko Fomation: 16.6–13.1 Ma, Tomari Formation: 16.6–15 Ma, Gamanosawa Formation: 15–10 Ma. Biostratigraphy shows that most of the K–Ar ages reported from the Tomari Formation by previous studies are rejuvenated ages. The unconformity between the Tomari and Gamanosawa Formations around 15 Ma is correlated to the widespread unconformity recognized in the Miocene strata in the central and northeast Japan.

Recognition and stratigraphic correlation of marine Pleistocene deposits beneath the Hidaka Upland based on diatom assemblages in the Hidaka Observation Well, Saitama Prefecture, Japan

In order to investigate the presence of marine Pleistocene deposits under the Hidaka Upland, the western part of Kanto Plain, central Japan, diatom assemblages are analyzed using cuttings specimens obtained from the depth between 550 to 130 m of the Hidaka Observation Well drilled by National Research Institute for Earth Science and Disaster Resilience (NIED). Diatom fossils occur in the specimens ranging from the depth 130 to 200 m in the well. All diatom assemblages are dominated by marine to brackish species, suggesting that marine beds include shallow marine sediments. Since the fossil diatom Lancineis rectilatus, a biostratigraphic index species indicating 1.45 to 0.7 Ma in Kanto Plain, is not found from any specimens, shallow marine beds in the well can be correlated to below the L. rectilatus zone in the Kawajima core, 600 m-long core located at about 14 km away from the Hidaka Observation Well, and also correlated to the Lower Pleistocene Bushi Formation in the Kaji Hills.

Zircon U–Pb and fission-track ages of the Miocene in the 1:200,000 Noheji Quadrangle, Northeast Japan

Zircon U–Pb and fission track dating for the Miocene strata was carried out in the preparation of the geological map of Japan 1:200,000, Noheji (2nd edition). Seven volcanic and volcaniclastic rock samples from the Sunagomata, Gamanosawa, Tomari, Kozawa and Yotsuzawa formations were analyzed for dating. This report describes the geology of these sampling sites and dating results.