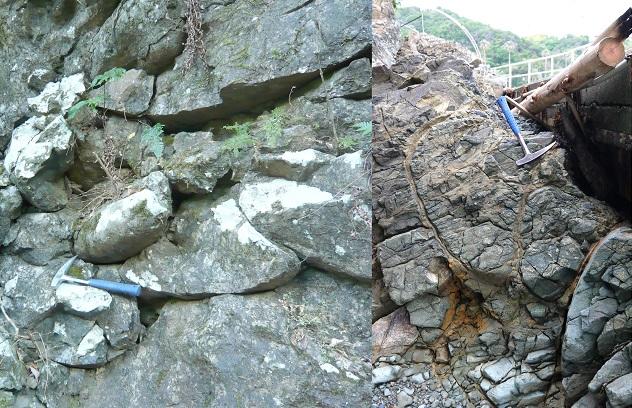 Explanation: In the eastern Kii Peninsula, the Mikabu Greenstones, which belong to the Sambagawa Belt, are exposed for ca. 3 km from south to north and ca. 30 km from west to east. They are composed of basaltic lavas and volcaniclastic rocks with minor amounts of dolerite, gabbro and ultramafic rocks. The lavas frequently show overturned pillow structure, which is one of the reasons that support the existence of a large-scale recumbent fold within the Sambagawa Belt in this district. The mafic rocks are characterized by two types of amphiboles: igneous brown hornblende and metamorphic blue-purple alkali amphibole, the latter of which is reported in detail in this volume.
(Left) Hikogataki valley within the forest area of the Ise Grand Shrine, Ise City; (right) beach in northeastern Arashima area, Toba City.

(Photograph and Caption by UCHINO Takayuki)

Purple to pale-blue amphibole regarded as alkali amphibole ubiquitously appears in the Mikabu Greenstones of the Sambagawa Belt in the Shima Peninsula, Mie Prefecture. The amphibole was proved to be magnesio-riebeckite of Na-amphibole and ferri-winchite of Na-Ca-amphibole based on chemical compositions measured using the EPMA system. Judging from the mineral assemblage of these alkali amphiboles and the other metamorphic minerals such as chlorite, epidote, albite, actinolite, hematite, etc., the dolerite probably underwent the metamorphism of the transitional zone facies between the blueschist facies and pumpellyite–actinolite facies or greenschist facies.