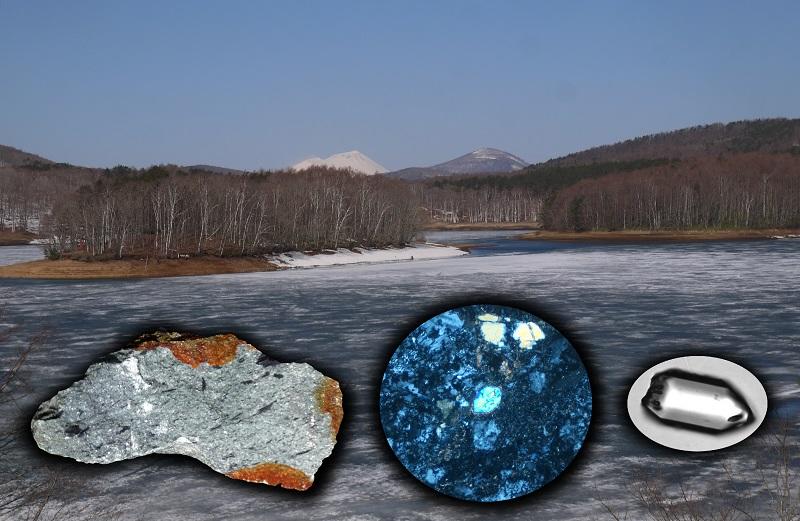 Lake Gando against Mt. Iwate and zircon crystals in sandstone in the Jurassic accretionary complex

Lake Gando, whose flood area is c.a. 6 km2, was constructed for irrigation and hydro-electric generation in the Sotoyama district, eastern Morioka City, Iwate Prefecture. The mountains in the middle are, from left to right, snow-covered Mt. Iwate (alt. 2,038 m), an active volcano, and Mt. Himekami (alt. 1,124 m), which is composed of Early Cretaceous granite.
The basement around the lake consists of the Jurassic accretionary complex in the North Kitakami Belt. The inserted photos are, from left to right, a pale green sandstone (“Yonaigawa Sample”) in the Jurassic accretionary complex, detrital zircon in a thin section of the sandstone (crossed nicols), and a polished zircon grain for dating. The obtained youngest cluster U-Pb age is c.a. 190 Ma, middle Early Cretaceous (see Uchino (2019) in this volume). The length of the sandstone specimen and zircon grain is c.a. 10 cm and 100 μm, respectively.

(Photograph and Caption by Takayuki Uchino)

During the national mapping project for Quadrangle Series, 1:50,000, Akechi District, a granitic mass with 4 x 3.5 km in diameter at the Akechi Higashigata area, Ena City, Gifu Prefecture, central Japan was newly confirmed. The granitic mass is separated into Eastern and Western masses by overlying Akechi Conglomerate. Based on the results of whole-rock geochemical analyses, the Earstern Mass and Western Mass are correlate with the Busetsu Granite and Naegi-type biotite granite, respectively. The Busetsu Granite is characterized by relatively clear whole-rock geochemical trends and chondritenormalized rare earth element patterns showing gentle slopes up to the left with negative Eu anomaly.
On the other hand, the biotite granite shows rather scatterd whole-rock geochemistry and relatively flat rare earth element patterns with clear negative Eu anomaly. Most of the samples from the Busetsu Granite show higher alumina saturation index (>1.1) and fractionation of garnet from sediment-origin parental melt is suggested. On the contrary, the biotite granite show wide range of alumina saturation index due to heterogeneous assimilation of host pelitic metamorphic rocks. Although the parental magma of the Naegi-type granite (including biotite granite in the study area) has probably been similar to that of the metaluminous granites in the Ryoke Belt in the Chubu district, partial melting at shallower crustal condition has possibly resulted in SiO2-rich nature of the Naegi-type granite.