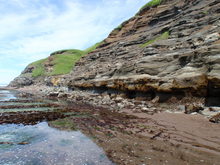 The Urahoro Group of Paleogene, which unconformably overlies the Nemuro Group (upper Cretaceous to Paleogene), is continuously distributed along the Kushiro coast, while the outcrop exposed of the latter is limited to a small area around Katsurakoi. The picture shows sea cliffs of the Yubetsu Formation of the Urahoro Groups. The Nemuro and Urahoro Groups in the area roughly strike NW-SE and dip about 5° SW, forming a homocline structure plunging into the Pacific Ocean.

(Photograph and Caption by Takayuki Sawaki)

Mesoscale crustal structure based on magnetic and gravity anomalies in the eastern part of Hokkaido, Japan.

A simple structural model explaining the gravity and magnetic anomalies was proposed along 2 profiles across the Pacific coast of the eastern Hokkaido (from Kushiro to Nemuro Peninsula). Recently, gravity and magnetic anomaly maps of offshore of this area were published. This area is characterized by high gravity and high magnetic anomalies. From the distribution of Nemuro formation, it was difficult to account for the source of highly positive gravity anomaly belt along the Nemuro Peninsula. Dolerites which compose a part of Nemuro formation were collected in this area. These samples have high density, susceptibility and strong NRM. Curie temperatures and Verwey transition indicate that magnetic carrier is mainly magnetite. Our 2-D modeling referred to these rock density and magnetic data. The result of it revealed that (1) the high gravity anomaly belt along Nemuro Peninsula was attributed to shallow dolerite bodies, and (2) high magnetic anomaly belts of offshore Kushiro was presumably caused by serpentinite.