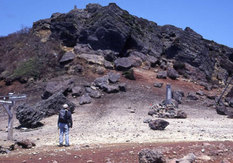 Adatara-Dake tephra at the summit of Mt. Adatara

(Photograph and Caption by Takahiro Yamamoto)

Quantitative re-description of tephra units since 0.3 Ma in the Fukushima-Tochigi region, NE Japan

Tephra units since 0.3 Ma in the Fukushima-Tochigi region have been re-described with regard to their stratigraphy, compositions, ages and volumes, adding unpublished data. They were erupted from Azuma volcano, Adatara volcano, Bandai volcano, Sunagohara caldera, Numazawa volcano, Futamatayama volcano, Nasu volcanoes, Takahara volcano, Hiuchigatake volcano, Kinunuma volcano, Nikko volcanoes, Iiji volcano and Akagi volcano. The erupted ages of some tephra units should be revised, because several previous studies included miscorrelations of tephra units. This study have listed up all tephra units, more than 0.1 km3 DRE in volume, from these volcanoes, and established the eruption histories on magma volume for these volcanoes, except for Nikko and Akagi.

Comparison of borehole strainmeter measurements with GPS: A case study at the stations of the Geological Survey of Japan, AIST

We carry out comparison of strain variations measured by borehole strainmeters with GPS-derived strain to investigate the characteristics of the long-term (over the time scale of several months) measurement of strainmeter. We compare the line strain data observed at 7 stations of the AIST with the equivalent strain calculated using the observations of displacement data at the GPS sites surrounding the strainmeter stations. The result shows that there are seasonal variations both in strainmeter and GPS where the amplitudes are consistent each other at some stations, but they are not always in phase. In addition, many stations do not show good agreement between GPS and strainmeter. It is suggested that the strainmeter measurements do not reflect regional crustal deformation but are rather affected by unknown site-specific sources.

Observation of radionuclides transported with aerosols at the GSJ in 2011: in relation to the Fukushima Daiichi Nuclear Power Plant accident

In order to obtain the geochemical knowledge of material cycle as a tracer and to contribute the safety of inhabitant, the aerosol observation data at the GSJ from the end of March to December 2011 were discussed after the establishment of observation and quantification methods for artificial radionuclides.
The detector efficiency was obtained by the standard ore radiation source and the sum effect of Cs-134 was corrected by using of Cs-134/Cs-137 activity ratio. Most of the artificial radionuclides except Cs-134 and Cs-137 in aerosol became below the detection limit at the end of June. The observed concentrations are estimated to be harmless to health. The meteorological effect on Cs-137 concentration such as rainfall and wind direction was not so clearly shown, partly because the time resolution of observation was low and the long time elapsed after the accident.

Petrographic properties of Middle Pleistocene tephras on the Odamaki Hills, Chichibu, Saitama Prefecture, central Japan are described. Examined tephras are similar to each other in containing abundant hornblende phenocrysts, but represent a variety of heavy mineral composition including cummingtonite, oxyhornblende, and biotite. Of them, biotite-rich tephras are correlatable with the APms known as Middle Pleistocene widespread marker tephras in central Japan. Refractive indices,(n2) of cummingtonite in pumiceous tephras generally represent low values ranging from 1.657 to 1.661. Hornblende phenocrysts in most pumiceous tephras range in refractive index,(n2) from 1.665 to 1.672. Those of the lowermost tephra layer,(OD1), however, exhibit a characteristically higher value of 1.672 – 1.681.