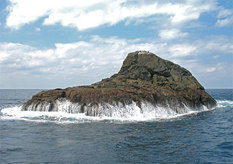 A solitary island in the distant ocean, Sandon Iwa Rocks.

This photograph shows the main rock of Sandon Iwa Rocks northeast of Amami-Oshima Island. This rock is composed of basalt lava with a small amount of basic tuff. northeast of Amami-Oshima Island is carried in this bulletin. These rocks belong to the Cretaceous Shimanto Terrane. Meters above the sea level of the rock is 8 m, and the monument of the Ministry of Finance is put up on the top. Details are shown in the report carried in this bulletin. (Photography: March 6, 2008)

Variation of elemental concentrations of river and marine sediments according to the grain size classification.

In order to characterize the variation of elemental concentrations according to the grain size classification, a total of 795 river and marine sediments were analyzed for major and minor constituents. Almost all the constituents of the river sediments are enriched more in the fine fractions than in the coarse ones, but both K and Ba are often abundant in the coarse fraction of sediments. The K and Ba abundant coarse sediments are commonly derived from the felsic rocks containing a large amounts of potassium feldspar. In the case of some muddy river sediments collected in the plain areas, somehow P, Cu, Zn and C are enriched more in the coarse fraction than in the middle fraction of sediments. In this case, the coarse sediment particles consist mainly by the nodules which composed of small clastic materials, clay minerals and biogenic materials. Although most constituents of the marine sediments are also much dominant in the fine fraction than in the coarse one, Ca, Sr and As are generally enriched in the coarse grain sediments distributed in relatively shallower water depth. There is no clear increasing or decreasing tendency in the abundance of Fe, Co, Ce, U and Y according to the grain size classification. High concentrations more than five times over background abundance are found for Mn and Mo in the fine sediments collected in the deeper water depth of the Japan Sea. The significant amounts of Ca and Sr in the coarse marine sediments are derived from the calcareous materials such as shell and coral fragments and/or calcareous algae. The anomalous behavior of As, Fe, Co, Ce, U, Y, Mn or Mo concentration according to the grain size classification may be caused by the process of weathering and diagenesis in the marine environments.

Carbon and oxygen isotope ratios (δ13C and δ18O) of calcium carbonate samples are ordinarily translated their raw measurement results into PDB scale by using a working standard, which isotope ratio is calibrated by an international carbonate standard. This study reports the isotope values of carbonate standard materials of JCp-1 and JCt-1 and evaluated them as the working standards of the isotope measurements. The isotope ratios of repeated measurement showed uniform values, δ13CPDB= –1.63±0.03‰, δ18OPDB= –4.71±0.03‰ for JCp-1, and δ13CPDB=+2.79±0.02‰, δ18OPDB= –0.496±0.03‰ for JCt-1, and they are appropriate for working standards. We can determine isotope value of sample, which isotope range is –5.01‰ < δ13CPDB< 1.95‰ and –22.97‰ < δ18OPDB< –2.20‰, by using a singlepoint anchoring of JCp-1 or JCt-1.

This is a first geologic report about Hirase, Tonpara Iwa and Sandon Iwa Rocks northeast of Amami-Oshima Island. Hirase Rocks is composed of mixed rock of sandstone, mudstone and felsic tuff. Tonpara Iwa Rocks is composed of basalt lava with chert. Sandon Iwa Rocks are composed of basalt lava with a small amount of basic tuff. These rocks contain a amall amount of actinolite and chlorite as metamorphic minerals. These rocks belong to the Naze Unit (Takeuchi, 1993) of the Shimanto Terrane on Amami-Oshima Island.

Adsorption properties of microfiltration and ultrafiltration membrane filters. -Study on elucidation and characterization of colloid. (part 1)

The adsorption properties of microfiltration and ultrafiltration membrane filters (cellulose mixed ester and polysulphone), were studied for uranium and rare earth elements (REE). These elements in a neutral solution showed a considerable amount of adsorption losses on the filters whereas those in a pH3 solution did little. Apparent adsorption coefficient (K) of polysulphone filter is three times larger than that of cellulose filter. Heavy REE shows larger K than light REE. Much attention should be paid to the sampling treatment of environmental water such as washing and preconditioning of filter before sampling. A method for precise determination of K is also presented.