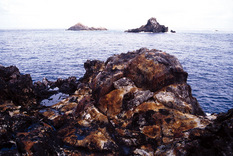 Tokara-Hirase is a group of small rocks located at the northern end of the Tokara Islands, Kagoshima Prefecture. Tokara-Hirase is an eroded volcano and these rocks correspond to the summit of a seamount with 400 m height and 13 km across at its base.
This picture shows the southern view of two largest rocks of Tokara-Hirase and the height of the largest rocks (the right rock in the photo) is 27 m a.s.l. Tokara-Hirase consists mainly of Pliocene lavas of andesite-dacite compositions and they are suffered from hydrothermal alteration.

Indium and other trace elements in volcanogenic massive sulfide ores from the Kuroko, Besshi and other types in Japan.

By analyzing trace elements of massive sulfide ores from rhyodacite-related Kuroko deposits (35 samples) and Yanahara pyrite deposits (10 samples), andesite-related Taro deposits (4 samples), and basalt-related non-metamorphosed Shimokawa, Tsuchikura and Makimine deposits (6 samples) and metamorphosed Besshi-type deposits (25 samples), potentiality of indium resource was evaluated. In the major Hokuroku Basin for Kuroko deposits, those of the eastern side, such as the Kosaka-Uchinotai (avg. 26 ppm In), the Hanawa and Furutobe are relatively rich in indium, and the indium contents are correlated with not zinc but copper content. This indium may be contained in tetrahedrite-group minerals of the Kuroko horizon in a narrow sense. Based upon an average content of indium in the Kosaka-Uchinotai deposits and In-production in the 1970’s, a recoverable amount in the Kosaka deposits is estimated to be 50 tons In, which are smaller two orders of magnitude than the world-class In-bearing massive sulfides deposits. On the contrary, In-anomalies are observed in the zinc concentrates of the Sazare and Shirataki mines, implying that indium in the Besshi-type deposits are mainly contained in sphalerites. Zinc grades of the crude ores of the Besshi-type deposits are low as 0.n% level. A large potentiality cannot be expected on the Besshi-type ore deposits. The high Invalues up to 207 ppm were obtained on the Cu-pyrrhotite-rich ores at Yanahara hosted in the Permian rhyolites. Sporadic In-anomalies, up to 167 ppm, have also been observed in ores from the thermally metamorphosed lower levels of the Besshi deposits. These are considered due to later hydrothermal In-enrichment along fractures by Miocene intrusion of the ilmenite series-granitoids of the Outer Zone of SW Japan.

Correlation between vitrinite reflectance (Rm) and illite crystallinity (IC) is examined in the Chichibu and Shimanto accretionary complexes of eastern Kyushu, Southwest Japan. The IC values, collected from where Rm data denoted 2.5 to 5.1%, range from 0.27 to 0.56 Δ°2θ. Analyses from 9 sites indicate linear regression equation “Rm =6.9–8.2×IC” with correlation coefficient of 0.91. The anchizone (0.25 to 0.42 Δ°2θ) of illite crystallinity corresponds to the paleo-temperature from 266 to 302 °C, based on conversion from Rm to temperature conditions.

K-Ar age determinations of ageunknown rocks in Japanese Islands -volcanic and plutonic rocks in the areas associated with Geological Map Project. (during fiscal 2005)-

In order to construct accurate geological maps of Japan, K-Ar ages of thirteen igneous rocks have been determined during fiscal 2005 by the geochronological laboratory of Geological Survey of Japan, AIST. The three volcanic rock samples were prepared as the groundmass fraction, in which large phenocrysts were removed as much as possible using an isodynamic separator. Biotite or hornblende in the ten plutonic rock samples was isolated by using an isodynamic separator and heavy liquids. Each data of rock samples determined is associated with rock name, locality, collector, geological setting, K-Ar age, analytical data and geological interpretation.

Fission-track age of the volcanic rock of Tokara-Hirase, Kagoshima Prefecture.

A FT age of 4.2±0.2 Ma is obtained from andesite lava of Tokara-Hirase, Tokara Islands. Tokara-Hirase is a summit of a conical seamount about 400 m high from the surrounding seafloor and 13 km in basal diameter. Above the sea level, small rocks distribute in an area 2.5×1.2 km. Tokara- Hirase consists of lavas of pyroxene andesite and quartz-phyric dacite and pyroclastic rocks, and these volcanic rocks are suffered from hydrothermal alteration in various degrees. The obtained FT age is older than the reported age of the other Quaternary volcanic islands of Tokara.