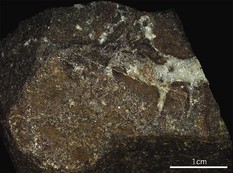 A jadeite-bearing metagabbro is found as a tectonic block in a serpentinite melange of the "Kurosegawa Belt" in central Kyushu. Jadeite occurs as not only fine-grained individual crystals (about 0.5 mm long) but also jadeite veins of several centimeters long in the metagabbro. Fine-grained jadeite in the metagabbro and jadeite in the vein are approximately pure jadeite. Both types of jadeites do not coexist with quartz.

REE resource evaluation of some alkaline granites and their weathered crust in South Korea.

A reconnaissance chemical study was made on four granitic bodies in South Korea, on which high REE contents are expected. Triassic foliated granite of the Daegang body occurring along the boundary between the Yeongnam-Ogcheon terrains contains average REE+Y content of 414 ppm and the L/HREE ratio is 8.4. Triassic Hamchang granite of the Ogcheon terrain is composed of highalkali and high-REE group, averaged as 508 ppm REE+Y, with L/HREE=19.0, and low-alkali and low-REE group averaged as 127 ppm REE+Y with L/HREE=23. On the contrary, the early Jurassic Hapcheon syenite at southeastern margin of the Yeongnam massif is low in REE+Y (171 - 217 ppm). The Paleogene Gigye granite in the Gyeongsang basin, which can be a split-off part along the Yangsan fault from the REE-rich alkaline Namsan body, contains 200 - 300 ppm REE+Y.
Soil samples were collected from the weathered crust of these granitoids and compared with those of unweathered granitoid values.The soil values are generally lower than those of the unweathered granites in the Daegang granite (414 ppm REE+Y in rock vs. 240 ppm REE+Y in soil) and Gigye granite (342 vs. 243 ppm REE+Y), indicating most of the REE leached out during the weathering. The loss-and-gain is unclear on the Hamchang granite and Hapcheon syenite. No clear enrichment of REE during weathering has been so far observed on the granitic bodies in South Korea.

Age of the Itoman Formation (new to science) at base of the Ryukyu Group in southern part of the Okinawa-jima, Ryukyu Islands, Japan.

A jadeite-bearing metagabbro is found as a tectonic block in a serpentinite melange of the "Kurosegawa Belt" in the western Izumi Town, Yatsushiro City, Kumamoto Prefecture, central Kyushu, Japan. The metagabbro is fine-grained and massive, and composed of glaucophane, augeite, pumpellyite and jadeite. It has undergone high P/T metamorphism of the glaucophane schist facies. Jadeite occurs as not only fine-grained individual crystals (about 0.5 mm long) but also jadeite veins of several centimeters long in the metagabbro. Both types of jadeites do not coexist with quartz.
By the electron microprobe analyses, fine-grained jadeite in the metagabbro and jadeite in the vein are approximately pure jadeite, and there is no compositional difference between the jadeites of two occurrences.

Two high-resolution aeromagnetic surveys three years apart were conducted to better understand the shallow subsurface structure of the Vulcano and Lipari volcanic complex, Aeolian Islands, southern Italy and monitor the volcanic activity of the area. The surveys were flown by helicopter at a mean altitude of 150 m above the terrain with NW-SE flight lines spaced about 250 m apart. In this kind of survey, however, the actual flight altitude varies, and the reduction of observed data to a smoothed surface is required to represent accurate magnetic anomalies. The equivalent source technique was employed for this purpose.
A comparison between datasets at two different times was conducted to monitor the volcanic activity of the area. The subtraction of the 1999 data from the 2002 data indicates high-frequency residuals especially in magnetically high-gradient areas on Vulcano. The differences were caused probably by spatial aliasing because of insufficient survey line spacing for these areas and by altitude error based on different positioning methods. These conditions imply that it is difficult to judge if there were meaningful changes related to volcanic activity between the two surveys. Therefore, we proceeded to compile a magnetic anomaly map based mainly on the 2002 survey data with the inclusion of some profiles from the 1999 survey to cover a larger area than the individual surveys.
Total magnetic intensity anomalies on the common surface parallel to and 150 m above the smoothed terrain and sea surface were complied. The map clearly shows that high-frequency and high-amplitude magnetic anomalies are distributed mainly on Vulcano, suggesting surface and shallow subsurface distributions of mafic volcanic rocks. On the other hand, no apparent magnetic anomalies lie on the southern Lipari, indicating that the area is composed of more felsic volcanic rocks than Vulcano.
Furthermore, apparent magnetization intensity mapping was applied to terrain-corrected magnetic anomalies, and a reduction to the pole anomaly map was also calculated at the same time. By comparison with a geologic map, the reduction to the pole anomaly map showed local magnetic highs in the Piano district, southern Vulcano, corresponding to some outcrops of trachybasaltic-trachyandesitic rocks which fill up Piano Caldera and lie on the flanks of Primordial Vulcano (South Vulcano). Magnetic highs are also distributed in and around Fossa Cone, northern Vulcano, corresponding to trachytic and tephritic lavas forming the cone. Local magnetic highs lie on the northern (Forgia Vecchia) and eastern slopes of the cone without surface signatures. According to the result of magnetic modeling on these magnetic highs (Okuma et al., 2006), past volcanic centers that produced thick lava accumulations in Fossa Crater are implied to be overlain by thick pyroclastic rocks in these areas.
This paper focuses on the compilation of an aeromagnetic anomaly map of the study area.

Chemical analysis of dolerites and a gabbro at the Daigo district in Ibaraki Prefecture, central Japan.

Rock samples from dolerite and gabbro dykes intruding into cherts and sandstones of the Jurassic Ashio Terrane in the Daigo district, northwestern Ibaraki Prefecture were collected. Petrography of three dolerite and one gabbro samples were briefly described and their bulk and mineral chemical compositions were also analyzed, as shown in Tables 1 and 2.