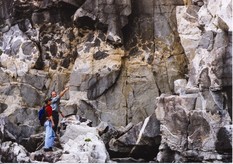 Magma mingling observed in the Miocene Ashizuri-misaki pluton in the Shikoku Island.

Miocene gabbroids and granitoids are mingled in the small Ashizuri-misaki pluton, which intrude discordantly into the Paleogene Shimanto accretionary complex. Both are of alkaline series, and the granitoids have been considered as A-type, although it occurs in "orogenic belt" of the Shimanto terrain. This photograph would represent the topmost part of the magma chamber where an early gabbroic magma crust dropped into the granitic magma.

Paleomagnetism of the Lower to Middle Miocene Series in the Yatsuo area, eastern part of southwest Japan:
clockwise rotation and marine transgression during a short period

Process of the tectonic rotation related to Japan Sea opening is viewed from tilt-corrected paleomagnetic data obtained from the Early to Middle Miocene sequence in the Yatsuo area on the Japan Sea coast, eastern part of southwest Japan. Progressive demagnetization experiments have been executed on samples obtained from two routes along the Yamada and Wada Rivers, and successfully isolated stable primary magnetic components in 16 sites. Together with data of previous studies, tilt-corrected reliable paleomagnetic directions comprising 10 normal and 27 reversed polarity sites of the Yatsuo Group on accurate stratigraphic positions show systematic temporal variation of easterly deflection in declinations. On the basis of our presented magnetostratigraphy, Yatsuo Group is assigned from the late Early to early Middle Miocene. Significant stage of rotation as much as 30° is specified during late Early Miocene between a period of active volcanism and subsequent period of marine transgression. We suggest that the Japan Sea opening event had a final phase of rapid rotation around the late Early Miocene, which seems to have caused marine transgression in relation to remarkable subsidence along the Japan Sea coast.

Three gabbroids and nine granitoids from the Miocene pluton at Ashizuri-misaki, Outer Zone of SW Japan were analyzed for major and trace elements. These plutonic rocks are composed of gabbroids and granitoids, which are alkaline in nature plotted in the shoshonite fields in the alkalisilica diagrams. The granitoids are high in Ba, Zr, Nb, and Zn; implying the rocks are of A-type affinity. The REE contents are the highest among the Japanese granitoids, having an average of REE+Y=453 ppm and LREE/HREE=11.
The late Cretaceous granitoids (20 samples) from the Sanyo Belt were also studied in four areas where the highest levels of calc-alkaline ilmenite-series granitoids are exposed. The REE+Y contents are generally lower than 300 ppm, but are relatively high in the Naegi Granite (ave. 246 ppm) and Tanakami Granite (ave. 213 ppm); both are rich in HREE (LREE/HREE=2.8-2.4). These granites are high in F and well fractionated (according to the Rb/Sr ratios), which are considered the main reasons for the REE concentration. An anomaly with 1,804 ppm REE+Y was discovered in a mafic enclave of the Tanakami Granite of the Kinki district.

Selenium abundance in recent sediments and their relation to sedimentary environments.

A total of 155 recent sediments collected from different environments, such as regions of four lakes and three sea areas around the Japanese islands and Central Pacific, were analyzed for selenium (Se) by continuous hydride generation and atomic absorption spectrometry. The average content of Se in the lake sediments (1.04 ppm, n=56) is slightly higher than that of marine sediments (0.78 ppm, n=99), and the values vary greatly depending on the sedimentary environments. Among the studied regions, the sediments collected from the reduced environments are rich in Se and total sulfur (T.S), whereas the sediments that occurred in the oxidized conditions have much lower values. The pelagic sediments from the Central Pacific are most depleted in Se (average 0.14 ppm, n=31) and T.S, but more dominant in manganese, reflecting their oxygen-rich sedimentary environments. Generally, Se is positively correlated with organic carbon; however, there is no such trend among heavy metals. The effect of recent environmental pollution by Se in the studied sediments is estimated to be negligible. Compared to the crustal abundance of Se (0.12 ppm), the considerable enrichment of Se in the recent sediments is assumed to be mainly due to the biological accumulation process and partly due to the reduction of Se (IV) and Se (VI) in the water phase under reduced environments. It has been concluded that the geochemical behavior of Se in lake and marine sediments is controlled mainly by the mode of occurrence, redox conditions of environments, supply of Se and organic carbon, biological productivity, dissolution of elemental Se with sulfite solution, and formation with the migration of volatile Se compounds.

Geology of the Tertiary and landslide around Heike-daira, Fukui Prefecture, central Japan.

Fossil foraminiferal assemblages were detected from deep borehole core samples drilled at the Yamakita area, western part of Kanagawa Prefecture, central Japan. The borehole is located at the arc-arc collision zone composed of the Izu-Bonin and Honshu Arcs. Planktonic and benthic foraminifers were poorly preserved in samples consisting of calcareous coarse-grained sandstone and sandy siltstone recovered from a depth about 820 to 850 m. The foraminiferal assemblages indicate that the depositional environment of the fossil-bearing interval was an inner sublittoral sea influenced by open ocean water. The coarse-grained sandstone is chronologically correlated with the middle to upper part of the Ashigara Group according to the calcareous nannofossils data. However, the lithofacies of the borehole geology is different from that of the Ashigara Group. It suggests that the marine sediments of the present study might have been deposited at a different provinance basin from that of the Ashigara Group.