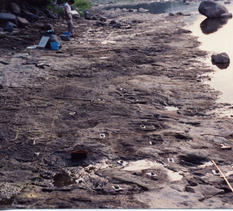 Outcrop of elephant's footprint fossils at the time of investigation.

Many footprint fossils of Proboscidea were occurred in the Lower Pleistocene Okui Formation in the Komoro Group at the Chikuma River in the Saku Basin, Nagano Prefecture. The trackmaker was most likely Stegodon aurorae (Matsumoto). The white papers were put on the footprint fossils as a mark. The Okui Formation is major stratums where a lot of body fossils of Stegodon aurorae were found in Japan.

The late Cretaceous Tanakami Granite is composed of well fractionated biotite granite of the ilmenite-series having high silica and alkali contents (73.3-76.7% SiO2; 8.0-8.9% Na2O+K2O), and high Rb/Sr ratios. The core of the pluton is coarse grained, containing high F and Li contents, but low at the margin, implying these volatile components were diffused out during the crystallization. The Granite is rich in rare-earth elements (REE), especially of HREE, and radioactive components. The magma is considered to have originated in reduced felsic materials, then fractionated and emplaced. The radioactive decay heat may have provided enough heat to generate hydrothermal fluid system and resulting the mica-clay mineralizations within the granitic body.

Seasonal change of chemical composition of water-insoluble components in aerosol particles collected in Tsukuba from February 2001 to June 2002.

Aerosol particles were collected at Tsukuba in Japan from February 2001 to June 2002 and their water-insoluble components were analyzed. Mass concentrations of aerosol particles had three peaks at >11.0 μm, 2.1-7.0 μm and 0.43-0.65 μm in diameter. The concentrations of aerosol samples with 2.1-7.0 μm particle size especially increased when a large-scale dust event was observed. Distribution patterns of most elemental concentrations such as Al2O3 were well consistent with size-segregated measurements of aerosol concentration in air. These patterns suggest that coarse particles consist mainly of mineral aerosols. However, some elements such as Cu and Pb were highly enriched in small particles (under 1 μm). These elements are considered to originate in anthropogenic materials. Focusing on the seasonal variation of mass concentrations of aerosol particles, in summer, fall and winter, the mass concentration of fine grains comprised of carbon aerosol was higher than those of coarse grains consisting of mineral aerosol. But their relationship adversely changed in spring. Especially, large-scale dust event supplied coarse grains with mineral aerosol about 10 times than usual case and most elemental concentrations such as Al2O3 in the air became extremely high. Seasonal variation of mass concentrations in fine grains did not correspond to the dust event but had the similar trend to that of Al2O3. Nevertheless the Cu and Pb contents in fine grains extremely increased in spring and had different seasonal trends from the Al2O3 content in fine grains. These results suggest that local surface materials consisting of mineral aerosol and considerable anthropogenic materials were supplied as a fine aerosol at Tsukuba.

Source disversity of the older and early Mesozoic granitoids in the Hida Belt, central Japan.

The older granitoids and the early Mesozoic plutonic rocks were studied forδ18O value, magnetic susceptibility, and major and minor elements. The older granitoids belong to ilmenite series and haveδ18O higher than 9.8 ‰ (averaged 10.5 ‰), but the early Mesozoic plutonic rocks belong to magnetite series and haveδ18O values lower than 9.1 ‰ (average 7.9 ‰); the inverse correlation betweenδ18O value and magnetic susceptibility, everywhere observed in the Cretaceous and Tertiary granitic terrains in Japan, is also true in the Hida Belt. Many of the older granitoids show high Sr/Y ratios. This is the first time to find adakitic ilmenite series in the Phanerozoic granitoids of the Circum- Pacific rim. The adakitic components are also involved in the early Mesozoic plutonic rocks, especially those of the inner Hida belt where mingling with the crustal components is suggested. The adakitic character can be generated in a diversity of the origins, besides the slab melting.

Many proboscidean footprint fossils were found from the Lower Pleistocene Okui Formation in the Komoro Group at the Chikuma River in Tomi City, Nagano Prefecture. The stratigraphic horizon containing the trace fossils are situated about 2 meters above the Hakeyama Pumice Tuff ( ca. 1.3 Ma). The trackmaker was most likely Stegodon aurorae (Matsumoto), based on the morphological characteristics of the footprints and proboscidean biostratigraphy of Japan.
The palaeoenvironment of the horizon containing the footprints is considered to be formed at flood plain based on sedimentary facies and associated plant and molluskan fossils.

Research history of the Seba region in the Sambagawa metamorphic belt, central Shikoku, with special focus on its field-geological aspect.

In the Seba area of the Sambagawa belt it was previously proposed that eclogitic basic schists found in the area adjacent to a metagabbro body formed by solid-state contact metamorphism as a result of tectonic emplacement of the metagabbro. This explanation has been reexamined through later studies, which include discovery of a number of eclogitic basic schists (or their constituting mineral, omphacite) distant from the metagabbro and recognition of relationship between multiple deformation stages and growth of omphacite. The results indicate formation of all the eclogitic basic schists in the Seba area can be attributed to a single regional eclogite-facies metamorphism. This research history gives the following implications to field studies for high-grade metamorphic regions: 1) recognition of key metamorphic minerals and of its map distribution should be done with great care; and 2) multiple deformation stages and their associated structures should be classified in relationship to growth timing of metamorphic minerals.

Summary of safety and regulatory control in the proposed HLW repository at Yucca Mountain, Nevada, USA.

Siting of a proposed high-level nuclear waste repository at the Yucca Mountain, Nevada was federally approved in 2002, and a license application for construction will be submitted from U. S. Department of Energy to U. S. Nuclear Regulatory Commission in 2005, according to the federal regulation of 10 CFR Part 63. U. S. Nuclear Regulatory Commission will strictly review the license application, according to the process and schedule of the federal regulation of 10 CFR Part 2. When NRC judges that contents of the license application and its revised version assure the public health and safety before and after permanent closure of the repository, U. S. Nuclear Regulatory Commission authorizes the construction of the repository and issue the license for its operation.