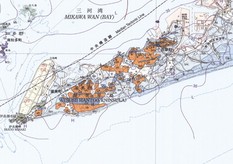 Geological outline of the Atumi Peninsula. Cx, ch and ls : Accreationary complex of the Chichibu Belt. From the Geological Sheet Map 1:200,000 Toyohashi and Irago Misaki published by the Geological Survey of Japan. in 2004.

On the oxidized and reduced granites found in quarries from Okayama city, Southwest Japan.

Two different granites in their oxygen fugacity during the formation, are seen in the drill cores from the northwestern part of Okayama City. One is coarse-grained granite having no or little rock-forming magnetite, while the other is fine-grained aplitic granite occurring in sheet-like form and containing coarse-grained magnetite in miarolitic aggregates of K-feldspar and quartz. The major and trace elements chemistry indicates that the aplitic granite is crystallized from fractionated melts of the coarse-grained granitic magma. It is suggested that the fractionated magma became rich in H2O which dissociated into O2 and H2 and the hydrogen diffused out to the roof rocks; then the oxygen fugacity was increased to form magnetite. Lollingite was discovered along cracks of the coarse-grained granite at one quarry, reflecting a low sulfur fugacity of the post-magmatic hydrothermal activity of these granites.

Geochemistry of selenium in soils from the Kanto district, Japan.

A total of 247 soils collected from the southern to northeastern Kanto district were analyzed for selenium (Se) by continuous hydride generation and atomic absorption spectrometry. The average Se content of volcanic ash soils (0.65 ppm, n=176), brown forest soils (0.47 ppm, n=31) and alluvial soils (0.54 ppm, n=40) are more than ten times higher than that of the average igneous rocks. In the case of volcanic ash soils and brown forest soils, the Se is generally enriched in the upper soil layers than in the deeper ones, and positively correlates with organic carbon and sulfur. This may be mainly caused by the biological accumulation process. The Se rich volcanic ash soils are accumulated during the last 15,000 years, reflecting the global warming and the high biological productivity. Several sand layers derived from basement rocks are found in the cores of alluvial soils. Compared to the mud layers, sand layers are poor in Se, organic carbon and most of the heavy metals. The alluvial soils existed under the effects of saline water in the past tense are significantly dominant in sulfur, but not enriched in Se. This may reflect that Se (VI) does not precipitate with hydrogen sulfide. It has been concluded that the geochemical behavior of Se in soil layers is controlled mainly by the mode of occurrence, biological productivity, redox conditions of environments, and migration during diagenesis.

Simulation experiments of R gas sampling were done to know light hydrocarbon concentrations emitted from tubes used to collect R gases in geothermal gases. The investigated tubes were normal gum, Viton and silicone tubes. The emitted light hydrocarbon concentration was the lowest in the case silicone tube heated at 120°C for 7 days before the simulation experiments was used. Furthermore, it is presumed that normal gum tube should not be used as sampling tube, because it emits high concentration of ethylene.

Additional notes on some species of Mantelliceras (Ammonoidea) from central Hokkaido, North Japan (Studies of the Cretaceous ammonites from Hokkaido and Sakhalin-XCVIII).

In addition to Mantelliceras japonicum Matsumoto, Muramoto and Takahashi and M. cantianum Spath, previously reported from the lower Cenomanian in the Ikushunbetsu Valley of the Mikasa district, M. cf. mantelli (J. Sowerby) from the basal part of the Cenomanian, M. cf. picteti Hyatt and M. cf. dixoni Spath from somewhat higher stratigraphic levels in the same area are described. Also M. cf. couloni (Orbigny) from the Hobetsu district is redescribed with some amendment.