Special Issue: The basic study on the assessment of influence by heat and hydrothermal water for geological disposal of nuclear waste. 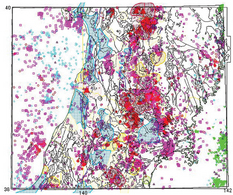 Background and summary of the basic study on the assessment of influence by heat and hydrothermal water for geological disposal of nuclear waste.

The purpose of the research is to comprehend earth scientific characteristics and genetic origins of high-temperature anomalous areas, and to examine the evaluation methods for the effects of heat and hydrothermal water on surroundings of geological repository of high-level nuclear waste at the stages of extraction of Preliminary Investigation Areas (PIAs) and of its following site-specific surveys. This special issue is prepared to introduce the outline of the project and preliminary result of each subdivided research subject. The conceptual model of subsurface thermal anomalies is tentatively proposed. The research contents and results are described briefly as follows.
1) An examination of earth scientific characteristics of high-temperature anomalous areas
(1)Examinations of extraction of thermal anomaly and comprehensive method of characteristics based on discharged heat from hot springs
The problems on data acquisition, data use and calculation of discharged heat from hot springs, are investigated. The data of hot springs recently exploited are newly collected at Tohoku district.
(2)An examination of construction of data base for rock alteration, and partially construction of data base
General software is investigated how to be utilized for construction of the data base of rock alteration, and the data base is partially constructed for geothermal bore hole data in Kyushu district.
(3) Information gathering on earth scientific characteristics and 2D-3D visualization of data
The distribution maps concerning topography, geology, seismic hypocenter, electric resistivity, Curie-point isotherm depth, and subsurface isotherms are collected and summarized as input data to the data base for 2-D and 3-D visualization.
2) An examination of genetic origin of high-temperature anomalous areas
The domestic and international references are surveyed on analytical methods using multi-components and multi-phases simulators for fluid flow, and on analytical regions and boundary conditions for regional analysis.
3) An examination of survey, analysis and evaluation methods
(1)Analytical method for deep subsurface structures by electromagnetic survey
Pre-existing electromagnetic (MT) data in Tohoku district are re-analyzed. It is recognized that temperature anomalous zones are presumably identified as low electric resistive zones.
(2) Analytical method of deep subsurface structures by hypocenter distribution
Deep-seated geothermal resources map and hypocenter distribution map in Tohoku district, are compared each other. It is recognized that hypocenter distribution is useful to identify the hydrothermal areas.
(3) Analytical method of long-term change of geothermal system by radiometric dating method
It is confirmed by reference survey that ESR dating is an optimum method for age-determination of geothermal activity. The research subjects and possibilities of ESR applications are investigated.
(4) Evaluation method for heat and hydrothermal activity effects based on fluids geochemistry
Characteristics and diversity of fluids in granitic bodies are summarized by reference survey. The subjects to be investigated are listed.

Consideration on the analytical method for heat anomalies based on distribution of heat discharge by hot springs.

Distribution of heat discharge by hot spring is a valuable feature for evaluating geologic repository site because it reflects both underground temperature and underground hydrologic conditions. Considering preparatory procedure of updating the manner of heat discharge calculation, several points have been noted. The following two points are particularly significant. For the time being naturally discharging hot springs occupy about 30 percent of the total amount of hot spring water in Japan. Therefore (1) we must evaluate natural discharge and pumped hot water separately. Recently developed hot springs, especially those by deep wells, are likely to be suffered from changes in their condition such as decrease in water temperature and/or production rate in a shot period after development. Therefore (2) hot spring data should be carefully treated for evaluating heat discharge by them.

Current status of regional hydrogeological studies on geological disposal including hydrogeological modeling using numerical simulators is reviewed in this report. A regional scale and boundary conditions of numerical models are summarized mainly from the results of the RHS (regional hydrogeological study) project conducted by Japan Nuclear Cycle Development Institute (JNC) in the Tono area. We also refer to the current conceptual models of hydrology and numerical models of unsaturated zone flow at Yucca Mountain, Nevada, which is the arid site proposed for consideration as the United States’ first underground high-level radioactive waste repository. Understanding behavior of a freshwater-saltwater transition zone seems to play a key role in the hydrogeological modeling in a coastal region. Technical features of a numerical simulator as a tool for geothermal reservoir modeling is also briefly described.

Magnetotelluric (MT) data obtained in the Abukuma area, eastern Japan, has been interpreted using a two-dimensional (2D) inversion scheme. The survey line, approximately 50 km long, spanned from Motomiya Town in central Fukushima Prefecture in the west to Namie Town near Pacific Ocean in the east. The survey area is mostly underlain by granitic plutons in Mesozoic time. The estimated 2D resistivity model exhibits highly resistive formations beneath the entire survey line, with resistivity of 1000 - 10000 ohm-m. There is a low-resistivity shallow layer at the eastern end of the survey line, which corresponds to Tertiary and Quaternary sedimentary formations. At depths greater than approximately 15 km, which correspond to the lower crust, there is a relatively low resistivity zone of several hundreds ohm-m. However, this resistivity is mush higher than the lowresistivity lower crust which has been found in other Outer Volcanic Front region in northeastern Honshu Island, such as northern Miyagi Prefecture. This indicates that the thermal or hydrothermal activity in the Abukuma area is weak in the lower crust as compared with other areas in northeastern Honshu Island.

Using the earthquake catalog data provided by the Meteorological Agency at the existing observation points, the correlation between the hypocenter distribution and deep-seated geothermal resources areas under plains was investigated in northern Honshu. Although the used data might not be reflecting the steady seismic activity of northern Honshu enough since the period after completion of the dense network of seismic stations is short, it turns out that seismic activity is not so active in deep-seated geothermal resources areas. Ito et al (1990) pointed out that the lower limits of depth distribution of the hypocenters are correlative with degree of heat flow. Therefore, we tried to extract some informations on the temperature distribution of the crust from hypocenter distribution data. The result indicates that the circumference of “Furukawa” deep-seated geothermal resource area is active in seismic activity in comparison with “Furukawa” geothermal resource area itself. Many researches such as identification of the positions of earthquake reflective sides using the seismic wave forms, have carried out. Moreover, the 2003 northern Miyagi earthquake is under investigation, then it is expected that the situation in the crust under “Furukawa” geothermal area will become more clear.

In order to evaluate effects of geothermal anomalies at high-level radioactive wastes disposal sites, information on long-term development and possible future activity of geothermal systems are needed. The only method to measure the time in the geothermal history is radiometric dating resetted by geothermal heat, such as electron spin resonance (ESR) and thermoluminescence (TL) methods.
Previous studies reported historical shift of surface manifestations for some kilometers in 0.1 m.y. by TL dating, and repose intervals of 0.4 m.y. by TL dating and 0.01 - 0.02 m.y. by ESR daing. Unfortunately, we have no more quantitative information on long-term geothermal activity because reports and researchers are insufficient. Further systematic studies on radiometric dating in present and past geothermal fields are needed to make guidelines for radioactive wastes disposal siting.

Geochemical features of groundwaters in granitoids.

Geochemistry of groundwaters in granitoids of Japan and those of Baltic and Canadian shields was reviewed in order to construct a basis which is available for future extraction and investigation of thermal anomaly and hydrothermal waters in granitic areas without volcanic activity. Groundwaters in granitoids derived from meteoric water are generally Ca•Na-HCO3 type, low in salinity (<1 g="" l="" slightly="" acidic="" to="" neutral="" and="" oxidized="" at="" shallow="" levels="" na-hco="" sub="">3 type, low in salinity, slightly alkaline (pH<10) and reduced at deep levels with the exception of more varied geochemistry at areas where fossil or present seawater has infiltrated or fluids derived from magma or hot rocks have been left. Groundwaters in the shields are generally Ca(•Na)-Cl type and highly saline (>300 g/l) at deep levels. The following tasks to be solved are necessary for more detailed understanding of geochemistry of groundwaters in granitoids: i) quantitative evaluation of water-rock interaction process using a geochemical simulator and ii) identification of origin, genesis and mobilization mechanisms for saline groundwaters at deep levels.