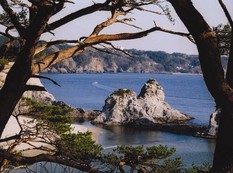 Kitakami Mountains of NE Japan are well known sedimentary terrain intruded by the early Cretaceous (±110 Ma) plutonic rocks which include K-alkalic to adakitic variety. Besides, Paleogene adakitic felsic rocks intrude them in small scale as laccolith, dike and plugs. The picture was taken at the laccolithic body of biotite rhyolites (50 Ma) occuring along the Pacific coast of Miyako city, called Jyodo-ga-hama, implying "Beech of the Pure Land".

In order to characterize the geochemical map of soil elements, major and minor elements were determined for Kuroboku soils, brown forest soils and alluvial soils collected in the southern Kanto district, Japan. The effects of biological accumulation on the soil elements are evaluated with the analyses of several plant materials. Compared to the crustal abundance, the plant materials are often enriched in P, Sb, Zn, Cd, Cu, Ca, Pb, Bi, Mn, Sr, K, Mo, As and Sn, but depleted in Al, Ti, Fe, Li, Cs, Tl, Be, Co, Cr, Ni, V, Ga, La, Ce, Th, U, Y and Zr. Most of the elements enriched in plant materials are generally dominant in the uppermost soil layers, reflecting the biological accumulation process. Whereas the elements depleted in the plant materials are clearly lower in the upper soil layers than the deeper one. This may be caused by the diagenetic transportation and the diluting effects by soil water and organic materials which accumulated during soil forming process. It is assumed that the parent material of the studied Kuroboku soils originated from the atomospheric transport materials such as altered tephra, reworked crustal materials with the fine particles of aeolian dust. The brown forest soils are composed mainly of altered basement rocks, and a small amount of the atomospheric transport materials. Both clastic materials derived from basement rocks and the atomospheric transport materials are significant sources of the alluvial soils. Compared to the noncultivated soils, cultivated soils are dominant in K and P through its suppying the manures. There is a clear difference in the chemical composition of the river sediments and the soils. In some samples collected around the highly industrialized areas, recent anthropogenic pollution for heavy metals are recognized. The geochemical mapping according to analyses of the soil itself will be useful for evaluation of recent environmental pollution and estimation of background level concentration of soil elements.

Sulfur isotopic ratio,δ34SCDT, was determined on 50 sulfide samples from the Cretaceous (with one Paleogene locality) granitic terrain of the Kitakami Mountains, and the data, together with 8 analyses already published, were examined in view of the ore genesis. The studied ore deposits and quarries are 37. Theδ34S values are highest in molybdenite deposits, as -0.5 to +3.6 ‰δ34S. The δ34S values of base metal deposits, which are mostly skarn type, vary more widely than those of the molybdnite deposits, ranging from -3.4 to +5.5 ‰δ34S. Tungsten and gold deposits, mostly of vein type, are hosted in the intruded sedimentary rocks and have low and widely varying δ34S values (+2.8 ～-16.7 ‰). Influence of biogenic sulfur from the Permian host pelitic rocks is considered for the low values of the Higashi-iwai (Au-W) and Masunai (Au) deposits.
The δ34S values of the granitoid-hosted molybdenite are averaged as +0.7 ‰, which is similar to +1.5 ‰δ34S of the averaged rock sulfur value of the Tono and Miyako plutons. This and lower δ34S values of the Kitakami sulfides, as compared with those of the Mo Province of Southwest Japan, may be correlated to a low fO2 magnetite-series character in the Kitakami Mountains. The intrusion-related gold deposits are divided into high-Au/Ag type with low contents of associated sulfides and low Au/Ag type with high contents of the associated sulfides. The former has -13.8～+2.8 ‰δ34S, indicating biogenic sulfur from the host sediments in some ore deposits, while the latter values, being -0.8～ +5.5 ‰δ34S, are more close to 34S value of granitoid sulfur, implying higher contribution of magmatic sulfur for the low Au/Ag type.

Rare earth elements compositions of Setouchi high Mg andesites (HMAs) and basalt; an implication for a mantle compositional shift beneath the SW Japan arc during the Japan Sea opening.

In order to evaluate the effect of the Japan Sea opening upon the mantle wedge beneath the SW Japan arc, rare earth elements (REE) compositions were determined for primitive high magnesian andesites (HMAs) and a basalt from the Setouchi volcanic belt in the SW Japan arc. The older HMA from the Osaka area (13.9 Ma) has higher light rare earth elements (LREE) and lower heavy rare earth elements (HREE) concentrations than the younger HMA from the Shodo-Shima area (12.7 Ma). To explain these REE patterns, mixing calculations were conducted. The results show that 30 ~ 70 % of the asthenospheric component (MORB source like materials) and 70 ~ 30 % of the pre-existing mantle, which is estimated from the Osaka HMA, can account for the REE patterns of the Shodo-Shima HMA and basalt. This result may suggest a replacement of a pre-existing mantle wedge by an asthenospheric component, which is related to the Japan Sea opening.