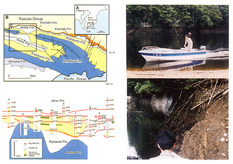 In the middle part of the Boso Peninsula, central Japan, the upper part of the Neogene Awa Group, Amatsu, Kiyosumi and Anno formations, in ascending order, are widely distributed (upper-left figure). In this part, detailed geological structures and straigraphy have been studied based on the distribution of many key tuff beds intercalated in these formations except for the area around the Seiwa Prefectural Park (block C in upper-left figure), located along the upper stream of Koito River, due to the existence of the old Mishima-dam and Toyofusa-dam lakes. The geological survey using a motor boat (upper-right figure) was conducted to disclose the detailed straitigraphy and structure of this area (lower-left figure). At an locality, the channel deposits of the middle part of the Anno Formation, sandy conglomerate and pebbly sandstone, directly Overly the lower Amatsu Formation (lower-right figure). Please see Ishihara and Tokuhashi (2001) in this issue.

The geology of the area in and around the Seiwa Prefectural Forest Park, Chiba Prefecture, central Japan, with special reference to the stratigraphy and struture of the Kiyosumi and Anno formations, Neogene Awa Group.

The Neogene Amatsu, Kiyosumi and Annno formations of the Upper part of the Awa Group are wall exposed in ascending order in the Seiwa Prefectural Forest Park, the central part of Boso Peninsula, central Japan. The Amatsu Formation is mainly formed of deep-water mudstones, and the Kiyosumi and the Anno formations are mainly made up of turbidite successions.In this region, the detailed geologic stratigraphic works based On the trace of many tuff marker beds have not been done owing To the extence of the Misima and Toyofusa lakes. We conducted The geologic survey using the motor boats in the lakes and Anno Formations, distributed in this area by making a detail geologic Map drown with the distribution of many tuff maker beds.
The Kiyosumi and Annno formations are gently folded along a Couple of anticline and syncline axes trending WNW-ESE with Dominant of younger N-S directional faults, and some older E-W directional low-angled reversal faults at the southern part Of the syncline in the Kiyosumi Formation. The new facts on the lithology and stratigraphy of these formations are follows: a deep Basal erosion and channel deposits with pebbly sandstone are developed across the syncline around Toyofusa Lake; maximum erosion of the channel reach to the horizon of Am 78 tuff marker in the upper Amatsu Formation; depositional centers of the Kiyosumi and Anno formations are moved northward during the deposition of these formations. This area is very important for the investgation of the depositional process of the Annno Formation as opposed to the other areas due to the existence of the basal erosion and the channel deposits, about 1 km wide in E-W direction and a few kilometer long in N-S direction.

Lineament analysis targeting both the land and the sea floor is important for comprehensive understanding of local and regional fracture systems, because some of the major lineaments are related to fracture zones that can emplace mineral and geothermal resources. For this reason, we have developed an automatic extraction method of lineaments, the Segment Tracing Algorithm (STM), and a vector-analysis technique to calculate Azimuths and dips of interpreted fractures though the combination of lineament data and digital elevation model (DEM) data. The Kyushu district, southwest Japan, is chosen as a study area and 77,893 lineaments are derived from the three full-scene LANDSAT TM band 4 images of the district. For the rich epithermal gold deposits, it is illustrated that the azimuths of the continuous fractures estimated near the deposits correspond generally to those of the principal veins. Correlation suggests an angular relationship between directional emplacement of the gold deposits and the tectonics that produced the fractures oriented in the estimated directions. For the geothermal field in the middle Kyushu, the significant fractures which act as conduits for transport of hydrothermal fluids to the grand surface can be identified. In addition, a lineament analysis for the sea floor is conduct using the shaded DEM of 1km mesh, produced by interpolating the sea-depth data. A combination of lineament maps of the land and the sea floor is useful to identify tectonically significant lineaments, that are continuous over the two regions and consider a genetic mechanism of the fracture systems.

Chemical compositions of amphiboles in hematite-bearing schists from the Saruta-gawa area in the Sanbagawa belt, central Shikoku, Japan

Amphibole and other minerals in the hematite-bearing basic and quartz schists from the Saruta-gawa area in the Sanbagawa belt, central Shikoku were analyzed by the electron microprobe. The data presented comprise 221 analyses of amphibole, and 90 analyses of epidote, chlorite, garnet, muscovite, albite, hematite, magnetite and stilpnomelane. All the minerals in this study occur from the hematite-bearing schists in the Sanbagawa rethrograde metamorphism in the Saruta-gawa area.