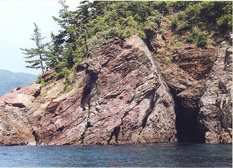 Chert outcrop at Nagozaki,Obama City,Fukui Prefecture. The chert is about 30m thic and laterally elongated for 1km, forming a sheet-like slab,and is also enveloped in pelitic mixed rock. Chert together with pelitic mixed rock is one of the major constituent elements of Jurassic accretionary complex of the Tamba Terrane.

Permian radiolarians from cherts of the Tamba Terrane in the Nishizu distric, Fukui, Southwest Japan.

Permian radiolarians are detected from cherts of the Tamba Terrane in the Nishizu district, southwestern Fukui Prefecture. The Tamba terrane exposed in the district is mainly composed of basalt, limistone, chert, mudstone and sandstone.It is characterized by a chaotic mixture of these rocks;i, e., slabs of basalt, limestone, chart, mudstone and sandstone are embedded in pelitic mixed rocks. Only a few biostratigraphical studies in the district have previously been appeared and some of them discribed the occurrence of Permian, Triassic and Jurassic radiolarians, but the ages of the rocks constituting the Tamba Terrane in the district are still ncertained.Newly recovered radiolarians treated herein can give the chert sequence in the Nishizu district additoinal ages of late Early, middle Middle and Late Peremian.Moreover, cherts generally occure as slabs, which are classified into small-scale lenticular and lage-scale sheet-like types, both of which are assigned to Permian in age.

Distribution of subsurface temperature and grandwater flow system in the Kanto Plain.

Tsukaharano debris avalanche deposit of 0.3 km3 was derved from Kyogatake Volcano which forms an andesitic cone of middle Pleistocene. The avalanche deposit spreads over the southwestern foot of the volcano, reaching as far as 11km and 1.4km down from the source Kyogatake. The deposit forms a debris plateau called Tsukaharano which is 10-25m high and 2.5km square, and is accompanied with many hummocky hills. The deposit sonsists of a chaotic mixture of mostly fumarolic alterd lava and fragile pyroclastic rocks which often sorms flameshape blocks showing imbricatte structure. The avalanche was associated with neither magmatic nor phreati eruption. 14C ages of peat soils on and under the avalanche deposit show ages about 5 and 6.7 ka respectively. They are much younger than the active time of the source volcano. Most likely an earthquake caused the avalanche.

Zinc-bearing actinolite was found in a hydrothermal vein of a drill core retrieved at 1,223 m in depth of the deep reseach well, WD-1, which had been drilled in the Kakkonda geothermal area, northeastern Japan. Zinc-bearing actinolite is fibrous and occurs with sphalerite chalcopyrite, pyrite, quartz, anhydrite, epidote and clay minerals in the vein. The ZnO content of actinolite ranges in 0.4-1.5 wt.%, relatively higt compared with Zinc-bearign calcic amphiboles in stage of geothermal activity in Kakkonda.