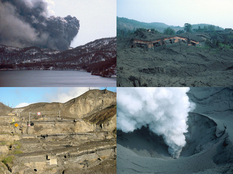 Severely damaged Route 230 due to graben-type normal faults near the uplifting center at the western foot of the Usu Volcano, Hokkaido, Japan. Many phreatomagmatic and phreatic eruptions occurred at the western and northwestern foot of the Usu Volcano from 13:07 March 31, 2000. More than 30 vents were formed at the western foot of the volcano. A 60 m-high cryptodome was formed in this area due to intrusion of high-viscosity dacite magma. Numerous WNW-ESE trend graben-type normal faults were formed at the uplifting area from April to July 2000. The Route 230 connecting between Abuta town and Toyako Spa area was severely damaged by the normal faults. The road was covered by eruption materials from new vents and mud flow deposits. A white plume at the right-top part of the picture is a volcanic plume from the active N-B Crater.

Observational research of the Geological Survey of Japan for the 2000 eruption of Usu volcano.

The 2000 eruption of Usu volcano started on March 31, 2000 with phreato-magmatic eruptions in the northwestern flank of the volcano. After formation of numerous vents, a crypt-dome has grown on the flank. As a result of this eruption, more than 8,000 people were evacuated from the area for more than one month. The Japanese Government made an urgent plan to establish a monitoring and observation system for the volcanic activity. The Geological Survey of Japan took part in the plan to monitor the crustal deformation, groundwater level, volcanic plumes, to conduct geological observation of the volcanic activities and petrological observation of the eruptive products and to perform aeromagnetic survey.

Observation of water level, temperature and electric conductivity of groundwater around Usu volcano.

Observation of water level, temperature and electric conductivity of groundwater started at the DT1 and DT2 wells where remarkable groundwater-level changes were observed related to the 2000 eruption of Usu volcano. Especially in DT1 an anomalous groundwater discharge of over 400 L/min began on March 30, a day before the volcanic eruption. After the eruption, the water levels at both the wells have gradually decreased. The water level in DT1 continues to decay on October, while the water level in DT2 returned the previous level on July. No significant change was observed in the temperature and electric conductivity of groundwater.

A helicopter-borne high-resolution aeromagnetic survey was conducted to better understand the subsurface structure of Usu volcano, Hokkaido, Japan, with a special reference to an eruption, which started on March 31, 2000. The survey was flown at an altitude of 150 m above terrain along north-south survey lines and east-west tie lines, spaced 200 m and 1000 m apart, respectively. Aeromagnetic anomalies were reduced onto a smoothed observed surface and some filtered maps were created. The characteristics of the distribution of magnetic anomalies will be discussed in this report.

Ground deformation of the Usu 2000 eruption: crack deformation measurements and theodolite monitoring at the northern and western foot of Usu Voclano, Japan.

Volcanic ash falls from the 2000 Usu eruptions and situation at the source area.

A volcanic plume monitoring system for the 2000 Usu eruption was made in order to get plume images for a long duration. The monitoring system consists of two systems: (1) a real-time monitoring image server system with a remote-control camera and (2) an automatic still-image capturing system taking at 5 minutes intervals. These systems were installed on June 4, 2000 at an observation point at the northwestern part of the Toya Lake, north of the Usu Volcano. All captured volcanic plume still images taken for more than half a year can be seen at the GSJ web site. Variations of volcanic plume conditions were observed from these images.

After the March 31 eruption of Usu Volcano, Japan, small-scale, various intermittent volcanic plumes due to phreatomagmatic and phreatic explosions have occurred at the western foot of Nishiyama volcano and the western foot of Konpira volcano. Heights, and intervals of volcanic plumes have been measured with the eye, or recorded using a video camera system, mainly at the station for observation 7-8 km north of the vents. The evolutional process of volcanic plumes in April divided into four stages. The first stage is the March 31 eruption. During the second stage (the period of April 1- 7), new vents opened occasionally by explosions with cock's tail jet at the two foots. Ash plumes grew at an irregular interval. Some of them grew 1000- 2700 m high. Plume height decreased during the second stage. During the third stage (the period of April 8- 10), the craters at the western foot of Konpira volcano developed cyclic muddy water plumes (jets) prominently at the interval of 15- 40 min., and increased them up to 700 m high. During the fourth stage since April 11, continuous 500-1000 m high vapor plumes with oscillation have predominated at vents which had already opened. Some of them were accompanied by small explosions. Rhythmical activities of plumes were detected. During the third stage and the beginning of the fourth stage, the two vent systems show complementary activities: one vent has a high activity, while the other vent has a low activity generally. It suggests the existence of a multi-vent interaction through stress due to high hydrothermal pressure among craters at the shallow level.

Ground deformation monitoring during the 2000 eruption of Usu volcano.

Usu volcano at the southwestern part of Hokkaido, Japan, started phreatomagmatic and phreatic eruptions at the northwestern and western flanks of the volcano from March 31, 2000. Significant crustal deformations with intensive earthquake swarms were observed from two days before the first eruption. Deformation rates were dramatically decreased after the first eruption. The continuous EDM measurements were started from April 12 to monitor the crustal deformations at the volcano. Two EDM instruments were installed at 3.4 km SSW and 3.3 km W from uplifting center. Nine mirror targets were installed along the western foot of the volcano. Measured data until the end of September are given in this report. All measured distances were shortened about 6 cm/day in maximum in the middle of April. The shorting rates were exponentially decreased before the movements were almost stopped until the end of July. Although, moving vectors of some mirror targets near the uplifting center were changed to opposite directions from the end of July.

Essential material of the March, 31, 2000 eruption of Usu volcano: Implication for the mechanism of the phreatomagmatic eruotion.

The 2000 eruption of Usu volcano, Japan, started with a phreatomagmatic explosion at the northeast foot of the volcano on March 31. This first explosion was the largest and the most important one. After a course of petrographical and geochemical analyses, we identified essential materials in the eruptive products that consist of various types (essential, accessory, accidental) of rock fragments. In the March 31st eruptive products, there is a pumice fall (Us-2000pm) with maximum grain size of 2 cm. It is considerably fresh in appearance and its magnetite composition is not similar to those of all pumices from Usu volcano. Therefore, we conclude that the pumice is not accidental (e.g., resedimented deposits of the 1977 product) but essential. In the ash fall, we found fresh volcanic glass (Us-2000g) with many needle microlites and spherical microbubbles. This type of glass composed of about a half of the March 31st ash. Because the Us-2000g glass is similar to the Us-2000pm pumice in petrological characters, this glass is also essential material. The March 31st phreatomagmatic eruption is characterized by the following special features; (1) a large amount of essential material is in the products; (2) black (ash-rich) and high eruption cloud was maintained for hours; (3) spontaneous fragmentation is inferred at deeper level than the aquifer. Thus, we propose that this eruption is a kind of phreatoplinian eruption. We also discuss the relationship between the magma of the 2000 eruption and those of the pre-2000 eruptions. Deduced from similarity of zoning profiles of plagioclase phenocrysts and of oxygen isotopic compositions, we conclude that the Us-2000 magma is also a member of the series of magmas since the 1663 eruption.

The 2000 Usu eruptions began with phreatomagmatic explosions on May 31. The first explosions occurred at the northwestern foot of the volcano, sent buoyant dark gray plumes 3200 m in the maximum height, and ejected about 100 thousands ton tephra containing dacite pumice. A phreatomagmatic explosion is caused by dynamic mixing of fragmented magma and groundwater. It is necessary for ascending of a buoyant plume that magma interact with water less than 0.2 in water/magma mass ratio. The May 31st explosions presumably originated in a volatile-rich head of the ascending magma. Degassing of the head promoted the magma fragmentation and effective mixing with groundwater in a low mass ratio. Since April 1, the eruption has been getting mild, and the northwestern foot of the volcano has upheaved due to the intrusion of dacite magma. Cock's tail jets and black plumes less than 1000 m in height frequently occurred in migrating vents on early April. Their ejecta seldom contain essential materials. The stable surfaces of the intruding magma inhibited the dynamic mixing between magma and groundwater. The cock's tail jets activities seem to represent weak phreatomagmatic explosions more than 0.4 in water/magma mass ratio or phreatic explosions in low water/host rocks mass ratio. During the eruption, hazard maps were prepared for a pyroclastic density current that could be expected from a phreatomagmatic explosion at the new vents on the northwestern foot, using an energy cone method. When a water/magma mixing mass ratio is 0.2 to 0.4, a resulting plume will be unstable due to heat loss of ejecta. It is assumed that the Heim coefficient is 0.25; this value is the mean of small volume pyroclastic flows. The height of column collapse is varied as a function of magma mass interacting with groundwater. The may 31st explosion could generate a pyroclastic density current traveling 1 to 2 km from the vent, if its plume collapsed.