The 2021 eruption of Fukutoku-Oka-no-Ba submarine volcano

Fukutoku-Oka-no-Ba is a submarine volcano located about 60 km south of Ioto Island in the Ogasawara Islands. From August 13 to 15, 2021, a large-scale eruption occurred at this volcano (Japanese volcano database) that generated a high eruption plume and ejected a large amount of pumice (Photo 1). The large amount of pumice clasts generated by this eruption have drifted to the Ryukyu Islands, about 1300 km away, over a period of about two months.
At the Geological Survey of Japan, AIST, in addition to researching the eruption phenomenon that occurred at Fukutoku-Oka-no-Ba, we are also conducting field surveys on pumice that has washed ashore in the Ryukyu Islands. This page introduces the survey results. The contents described may be revised or changed due to the progress of future research. 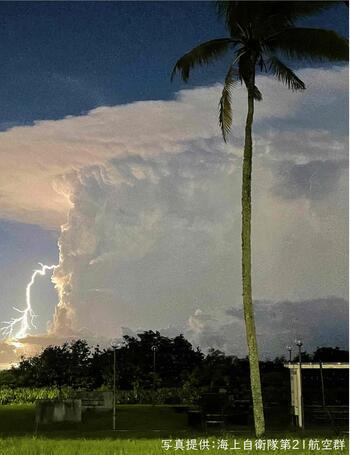 Photo 1 Distant view of the 2021 eruption of Fukutoku-Oka-no-Ba, with volcanic lightning and eruption column. Taken from Ioto Island around 18:00 on August 13.

Summary of the eruption

From analysis of images taken by the meteorological satellite Himawari-8, it was found that this eruption occurred from around 5:57 on August 13, 2021. The climax of the eruption generated an eruption column of volcanic ash and gas to a height of about 16 to 19 km above sea-level between 13:20 and 19:50 on August 13. The eruption was also confirmed from Chichijima Island, Ogasawara Islands, 320 km away (Japanese volcano database). After that, volcanic activity gradually shifted to intermittent eruptions with continuous lower-level activity in between. From 15:55 on August 15, no further eruptive activity was detected from analysis of images from Himawari-8, which marks the conclusion of this eruptive event. This series of eruptions is estimated to have a VEI of 4 and an eruption magnitude of 4.5 to 5.1, making it one of the largest eruptions in the Japanese archipelago since the Meiji era (AD 1868-1912), second only to the 1914 Taisho eruption of Sakurajima volcano (Oikawa et al., 2021).

Emergent islands at Fukutoku-Oka-no-Ba were formed by eruptions in 1904-05, 1914, and 1986, but were all later eroded and disappeared. Submarine eruptions that produced floating pumice occurred in November 1992, July 2005, and February 2010. Also, since the 1986 eruption, discolored waters have often been witnessed even when no eruptions were observed. For details, please see the AIST 10,000-year eruption event data collection.

The following information concerning Fukutoku-Oka-no-Ba submarine volcano is publicly available from the Geological Survey of Japan (GSJ), an arm of AIST.