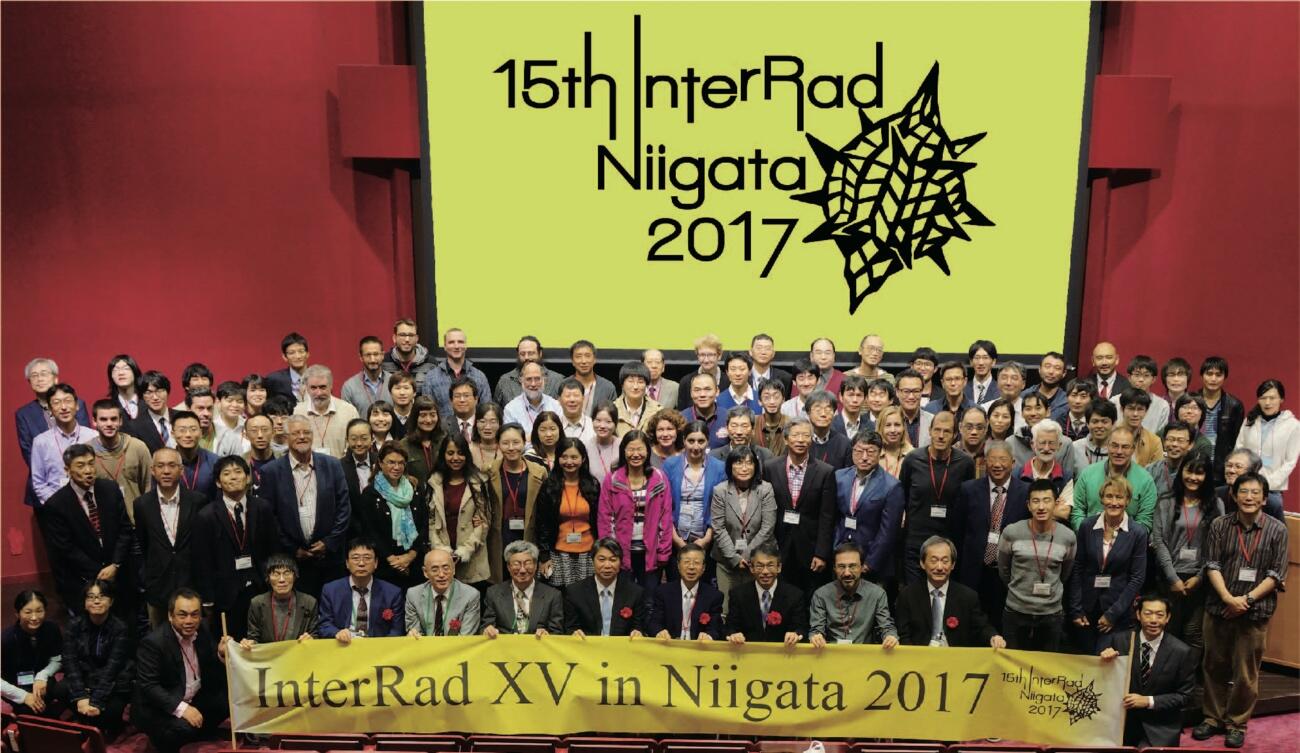 Group photograph of the all participants in the opening ceremony of InterRad XV (15th meeting of the International Association of Radiolarists) taken at the Library Hall in the Central Library of Niigata University on 23 October, 2017. A total of 187 participants from 16 countries (Australia, China, France, Germany, Indonesia, Italy, Japan, Korea, Mongolia, the Philippines, Russia, Slovenia, Spain, Switzerland, Turkey and the United States of America) attended the conference. Since 1980s, the Geological Survey of Japan has been supporting radiolarian studies in Japan as a national center of geological research and thus co-hosted InterRad XV which was organized from 20 October to 1 November 2017.

(Photograph by InterRad XV in Niigata 2017, Caption by NAKAE Satoshi)

A well-preserved and relatively rich radiolarian fauna is described from red to grey bedded radiolarites of the Fludergraben section in the Northern Calcareous Alps, Austria. These radiolarites were deposited just above the Klaus Formation, dated by ammonites as latest Callovian or the Callovian/Oxfordian boundary. The radiolarian fauna is therefore of an early Oxfordian age undoubtedly. Among long-lasting radiolarian species coming from the Callovian, we can distinguish some species that appeared in early Oxfordian time: Kilinora spiralis, Fultacapsa sphaerica, Protunuma japonicus, Pseudoeucyrtis reticularis. We discuss these results in the light of existing radiolarian zonations for the middle Callovian to Oxfordian, and redefined the Williriedellum dierschei Zone (lower-middle Oxfordian), which was previously ranked as subzone in the Zhamoidellum ovum Zone, on the basis of the new index species. These new findings fill a gap in the definition of the Oxfordian by radiolarians and result in a better resolution of the radiolarian biostratigraphy.
In the chapter of systematic part, we describe 37 genera, 67 species and 2 subspecies including diagnosis emendations of 2 genera (Loopus and Pseudodictyomitra) and 1 species (Protunuma japonicus). The type species of the genus Loopus is examined and redesignated.

The Toyora Group is one of the typical Lower to Middle Jurassic strata in Japan that is distributed throughout Yamaguchi Prefecture, Southwest Japan. It yields abundant ammonoids. Although, microfossils, such as radiolarians, have not been previously reported from the group, radiolarian fossils are first discovered at seven localities from the uppermost Toyora Group. Those correspond to the Transhsuum hisuikyoense and Striatojaponocapsa plicarum zones and are determined to be from Aalenian to Bathonian in age. These radiolarian age determinations are a little older than those determined using ammonoids and inoceramids. According to previous studies, the assignment age of the first appearance of Stj. plicarum is only estimated to be near the Aalenian–Bajocian boundary. To discuss this issue, further study is required to correct the fossil data such as the Aalenian ammonoids that occur in the intervals of ammonoid and radiolarian localities.

Radiolarian age of Triassic striped chert within the Jurassic accretionary complex of the Ashio terrane in the Ashikaga area, Tochigi Prefecture, central Japan

A striped structure within a single chert bed has been observed in the Tamba–Mino and Ashio terranes, Jurassic accretionary complexes of the Inner Zone of Southwest Japan. This study reports striped chert beds in four sections of the Ashio terrane in Ashikaga and Sano cities of Tochigi Prefecture, namely, Hikoma, Oiwa, Tsukiya and Orihime sections, and their radiolarian ages, except for the Hikoma section. The striped chert comprises streaks and spacing. The streak indicates a thin part of a pin-striped structure within a chert bed and consists mainly of clay minerals. The spacings indicate a thick part between the streaks and is composed mainly of cryptocrystalline quartz. The Oiwa section, which contains numerous striped chert beds, partially corresponds to the middle Carnian–middle Norian (Upper Triassic). The Tsukiya and Orihime sections, which include a few striped chert beds, partially correspond to the middle– upper Anisian (Middle Triassic) and upper Norian–lower Rhaetian (Upper Triassic), respectively.

Late Jurassic radiolarians from mudstone near the U–Pb-dated sandstone of the North Kitakami Belt in the northeastern Shimokita Peninsula, Tohoku, Japan

In the northeastern Shimokita Peninsula, Aomori Prefecture, a Jurassic accretionary complex (AC) belonging to the North Kitakami Belt is distributed in three hilly areas of the Kuwabatayama, Katasakiyama and Omori. Although the AC in the Kuwabatayama area has been extensively studied and subdivided into the Late Jurassic Iwaya Unit and the Early Cretaceous Shitsukari Unit, those in the other areas are not fully understood except for a recent report of the detrital zircon U–Pb age from sandstone in the Omori area.
We extracted radiolarian fossils such as Eucyrtidiellum cf. pyramis indicating the Late Jurassic (probably Kimmeridgian) from mudstone near the U–Pb-dated sandstone in the Omori area. Because this radiolarian age is close to the zircon U–Pb age, and the horizons of the mudstone and sandstone are close without any recognizable distinctive tectonic discontinuity between them, the clastic rocks in the Omori area may be stratigraphically continuous or contemporaneous sequences deposited around the Kimmeridgian.
The ACs in the Katasakiyama and Omori areas are correlative to the Iwaya Unit in the Kuwabatayama area based on the lithology, geologic structure and clastic rock age. Therefore, the ACs in the northeastern Shimokita Peninsula can be divided into the Late Jurassic and the Early Cretaceous units; the former is the Iwaya Unit in the Kuwabatayama area and the unnamed ACs in the Omori and Katasakiyama areas, while the latter is the Shitsukari Unit in the Kuwabatayama area.

The global silica cycle is an important component of the long-term climate system, yet its controlling factors are largely uncertain due to poorly constrained proxy records. Because radiolarians and other organisms preferentially extract lighter 28Si from the ocean, the δ30Si of biosiliceous tests can thus be used for a potential proxy of productivity. Additionally, δ30Si of oceanic silica could have reflected changes in the isotopic ratio of sources and sinks.
Here we show δ30Si records measured by secondary ion mass spectrometer (SIMS) in radiolarian silica, precipitated inside radiolarian molds in early Mesozoic bedded chert of the Inuyama section, central Japan. Range of measured δ30Si between -0.3 and 2 ‰ is consistent with that of modern and Cenozoic radiolarian tests. Relatively large intra-chert bed variability up to ~ 0.8 ‰ (1SD) support that δ30Si of the Mesozoic radiolarian molds are not perfectly homogenized in a chert bed during diagenesis. We found an overall inverse correlation between 10-Myr scale δ30Si and biogenic silica (BSi) burial flux, which contradicts with a conventional interpretation of δ30Si as paleoproductivity proxy, despite the lowresolution and scattered our δ30Si records. Although most of the factors controlling oceanic δ30Si are difficult to be constrained, this inverse relation might be explained by changes in δ30Si of mafic/felsic rock weathering ratio, which inferred from paleogeography. Further high-resolution δ30Si records will allow a better understanding of the past silica cycle.

The oxygen isotope (δ18O) analysis of carbonate fossils is widely applied for palaeoceanographic analysis, whereas that of siliceous fossils is only limited partly due to technical constraints and uncertain fractionation factors. Here we used a secondary ion mass spectrometer (SIMS) for δ18O of radiolarian silica, precipitated inside radiolarian molds in Mesozoic radiolarites from Japan, Italy, Switzerland and Romania in order to examine its potential for palaeoceanographic proxy. 507 measurements of the isotopic oxygen signature relative to the Vienna Standard Mean Ocean Water (δ18OVSMOW) of 53 chert samples range between 19.8 to 35.3 ‰ overlapping with that of modern and Cenozoic radiolarian tests in the equatorial Pacific. Relatively large intra-chert variability supports that δ18O of the Mesozoic radiolarian tests are not perfectly homogenized within a chert bed during the diagenetic segregation. The temporal changes in the δ18O values of radiolarians (δ18Oradiolarians) show an Early-Middle Triassic slight positive excursion, a Late Triassic high plateau, an Early Jurassic negative excursion with up to 8 ‰ , a Middle Jurassic slight positive excursion, and a few light values for the Cretaceous despite of their low resolution. A comparison of δ18O between radiolarian molds, conodont apatite, and the low magnesium calcium shells show overall similar secular variations during the Triassic, but different trends was observed during the Early Jurassic. Because our data is low-resolution, further cross check of δ18Oradiolarians is necessary to use as a proxy for paleoceanography

Radiolarian research by the Geological Survey of Japan, AIST, with bibliographic lists from 1950 to 2019