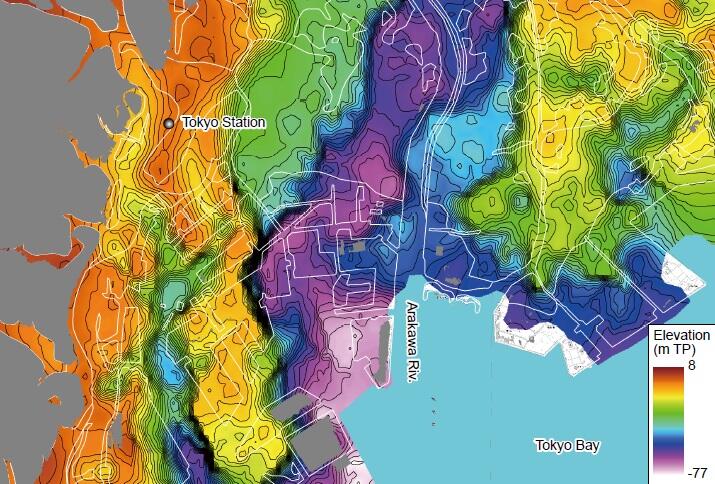 The Paleo-Tokyo River Valley runs from north to south along the present Arakawa River in the Tokyo Lowland. Three buried terraces are distributed on the both banks. The buried terraces on the left and right banks are dissected by the Gyotoku Valley and the Paleo-Kanda River Valley, respectively. The latter branches into the Showa Street Valley and the Marunouchi Valley, which lie in the east and west of the Tokyo Station, respectively. See Tanabe and Ishihara (2020) in this issue for details.

(Figure and Caption by TANABE Susumu)

Stratigraphy of the Neogene Taga and Hitachi groups in the Kitaibaraki-Takahagi area (southern Joban area, Ibaraki Prefecture, Japan) has been established based on field survey and diatom biostratigraphic analysis. The both groups are the part of sedimentary sequences deposited in the Early Cretaceous to Recent Off-Joban forearc sedimentary basin.
The Miocene Taga group in this area, ranging in age from 16.6 Ma to 7.5 Ma, is a sedimentary complex made of three different kinds of deposits: shelf to slope deposits, submarine channel fills and submarine slide scar fills. The shelf to slope deposits include the Takaku, Kidoba, Kohama, Juogawa and Kushigata formations. In this study, the Takaku Formation, a unit previously treated as a distinct group (Takaku Group), is placed at the lowest part of the Taga Group on the basis of diatom biostratigraphy and field evidence on the stratigraphic relations with below and above. The formation unconformably overlies the Lower Miocene Yunagaya Group, and consists of basal lag conglomerate, poorly stratified bioturbated sandstone in the lower part, and massive sandy mudstone in the upper part. The Kidoba, Kohama, Juogawa and Kushigata formations are composed of diatomaceous massive mudstone or sandy mudstone deposited in the slope environment. The submarine channel fills of the Taga group consist of mudstone and sandstone that buried 18 small submarine channels (0.3 to 1.2 km in width) incised into the submarine slope environment. They form a nested sedimentary complex, preserving discrete 14 units (Units T1–T14) separated by erosional surfaces with hiatuses from each other, although Unit T13 is not distributed in this area. The stacking patterns of submarine channel fills reflects alternate periods of erosion and deposition and the long-lived nature of the channels ranging several million years. Although some units of the channel fills are composed of sandstone deposited from turbidity current, much of the units are characterized by hemipelagic massive diatomaceous mudstone with thin sandstone layers. Each of the submarine channel fills shows a synclinal structure that probably formed by post-burial compaction of mudstone. As submarine slides scar fills of the Taga Group, two units (the Takado and Kokaigahama Units) are recognized in the uppermost part of the group. The both units consist of sandy mudstone and mudstone overlying shelf to slope deposits of the Kohama and Kushigata formations, respectively with sharp and flat erosional surfaces.
The Hitachi Group distributed in the souther part of the studied area and the further southwars ranges in age from latest Miocene (ca. 7 Ma) to Pliocene (ca. 3 Ma). The group consists of 11 units (Units H1– H11) of submarine channels fills produced by repeated burial and re-incision within channels. Among 11 units, Units H6–H11 are distributed in this area, most of which are composed mainly of sandy mudstone, and to the lesser amount, interbedded mudstone and sandstone, and amalgamated thick sandstone. Five small submarine channels of 0.3–0.9 km wide are recognized in the Hitachi Group of this area, and their spatial and temporal migration is broadly reconstructed.

Incised-valley topography formed into the Last Glacial Maximum beneath the southern area of the Tokyo Lowland, central Japan.

Incised-valley topography formed into the Last Glacial Maximum (LGM) beneath the southern area of the Tokyo Lowland including the Tokyo Bay area has been clarified on the basis of 5,767 borehole logs. The incised-valley topography has been reconstructed by spatially interpolating (Kriging) the depth distribution of the base of the post-LGM incised-valley fill identified in each borehole log. The Paleo- Tokyo River Valley flows from north to south along the present Arakawa River in the Tokyo Lowland. Three buried terraces formed during the Marine Isotope Stage (MIS) 5a, MIS 3, and the early stage of the LGM occur on the left and right banks of the Paleo-Tokyo River Valley. The buried terraces on the left and right banks of the Paleo-Tokyo River Valley are dissected by the Gyotoku Valley and the Paleo-Kanda River Valley, respectively. Absence of the Basal Gravel bed and the cover effect in the Gyotoku and Paleo-Kanda River valleys pronounced the undulation of the incised-valley topography formed in relation to the sea-level lowering and river incision into the LGM.

Chronostratigraphy of the Upper Miocene to Pliocene succession of the Tsubokawa Section in Shichinohe Town, Aomori Prefecture, Northeast Japan

Diatom biostratigraphic analysis and fission-track (FT) dating were carried out for the Upper Miocene to Pliocene successions exposed along the Tsubokawa River (Tsubokawa Section), in Shichinohe Town, Aomori Prefecture, Northeast Japan. The Upper Miocene to Pliocene are divided into the Wadagawa, Kotsubogawa and Ichinowatari formations in ascending order. The Wadagawa Formation in the Tsubokawa Section was correlated to the diatom zones NPD5C and NPD6A. The FT age of a pumice lapilli tuff layer of the Ichinowatari Fomation was dated at 4.1 ± 0.4 Ma (1σ). The age of each formation estimated from stratigraphic relations, biostratigraphy and FT age is as follows; Wadagawa Fomation: 12–8 Ma, Kotsubogawa Formation: 10–8 Ma, Ichinowatari Formation: about 4 Ma. Andesitic volcanic rocks (10–7 Ma) correlated to the Kotsubogawa Formation are widely distributed in the northernmost part of the Ou Backbone Range and the Osoreyama Mountains. This shows that vigorous andesitic submarine volcanism simultaneously occurred in these wide areas in 10–7 Ma.