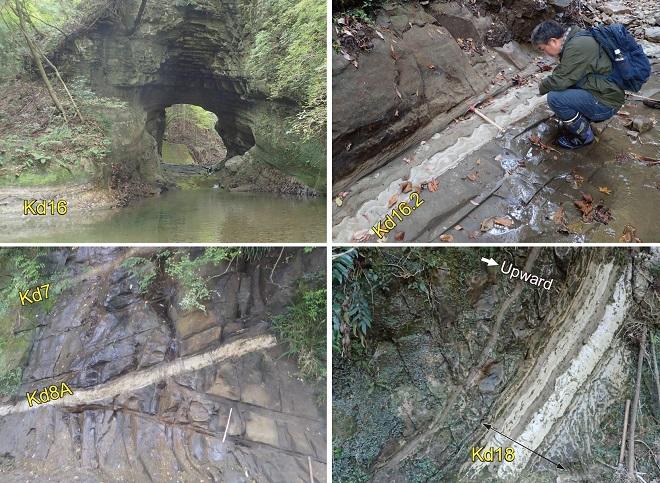 Upper left:Kd16 exposed in the Yuki River, Otaki Town. An opening in the middle is one of the tunnels called “Kawamawashi”. They were excavated for agricultural use of abandoned river channels and are commonly seen in the area where the Kazusa Group is exposed.
Upper right: Kd16.2 exposed in a branch stream of the Yuki River, Otaki Town. It is correlated with the tephra bed called “Kd11” in the Isumi City.
Lower left: Kd8A and Kd7 in a submarine landslide deposit block exposed along the Isumi River, Otaki Town. The basal slip plane (ramp) immediately below Kd8A cuts up through the footwall strata. The length of the white stick in the lower right is 50 cm.
Lower right: Kd18 in an overturned submarine landslide deposit block exposed along the Ono River, Isumi City. The length of the pickaxe in the lower right is 60 cm.

(Photograph and Caption by Masayuki Utsunomiya)

The lower to middle Pleistocene Kazusa Group on central Japan is known as one of the stratotype sections of the NW Pacific region, owing to the abundant tephra beds which enable precise correlation. A robust chronological framework obtained with helps of biostratigraphy and magnetostratigraphy provide highly resolved depositional age of the tephra beds and temporal variation of the volcanic activities around this region (i.e., the Honshu and Izu-Bonin arcs). The lower Pleistocene Kiwada Formation in the Kazusa Group is a deep-marine, siltstone-dominated strata (720 m in total thickness) in which many (>200) well-preserved tephra beds are intercalated. However, there have been some confusions in the stratigraphic relation among the tephra beds.