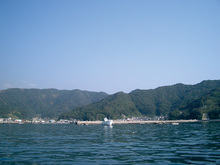 View of the Otani fishing port from the Nomi bay.

Several days before the Showa Nankai earthquake (04:19 JST Dec. 21, 1946, Magnitude 8.0) occurred, abnormal sea level changes had been observed on the Pacific coast of Shikoku. In the previous night, several fishing boats were out at sea. When they returned to the Otani port a few hours before the earthquake, the sea level had been significantly lowered so that they could not berth. This phenomenon may suggest the possibility that small tsunamis were generated prior to the earthquake. Observation of sea level changes to obtain the data on the period and amplification of tsunamis in the Nomi bay was carried out at seven stations in the bay for more than a year. In this issue, the sea level observation results are described while the eyewitness testimonies were reported in No.11/12, Vol.65.

(Photograph and Caption by Yasuhiro Umeda)

Relation between the strong ground motion and coseismic well water level rises during the 1999 Chi-Chi, Taiwan, earthquake in the alluvial fan near the hypocentral region

We compared the coseismic well water level rises (Cw) and the strong ground motions during the 1999 Chi-Chi, Taiwan, earthquake in the Quaternary alluvial fan near the hypocentral region using data produced by the dense networks of strong ground motion and groundwater observation. The correlation between the Cw of the shallowest aquifer (Layer 1) and the ground motion response spectra at 1 Hz (Sv(1.0)) is stronger than that at 0.1 Hz (Sv(0.1)). On the other hand, the correlation between the Cw of the deeper aquifers (Layers 2-1, 2-2, 3 and 4) and Sv (1.0) are weaker than that at 0.1 Hz. We also found the good correlation between the Cw and hydraulic conductivity in the all aquifers. It is difficult to estimate Cw only by the spectral amplitude even in a Quaternary alluvial fan, where the geological and geomorphological conditions are similar.

In the coastal areas of the Pacific Ocean of Shikoku, some sea level changes have been witnessed from a few days before the 1946 Nankai earthquake. Just before the main shock, sea level lowering of 2 – 3 m has been witnessed at Susaki Bay in Kochi Prefecture. It is considered that the small tsunami had generated in the open ocean. To assume the generation of the tsunami, it is necessary to some extent quantitative information about the period and amplitude. In order to obtain the amplification and predominant period of tsunami in the bay, the observation of sea level changes was carried out at 7 points in Susaki Bay, for 15 months from November 2010. The tsunami of the 2011 off the Pacific coast of Tohoku earthquake was recorded at the open ocean by the other agencies or institutes. By comparison of the tsunami double amplitude, it is found that the tsunami amplitude at the sea depth of 100 m in Tosa Bay and of 1,500 – 2,300 m near the Nankai Trough is amplified by maximum 8.6 and 21 times in Susaki Bay, respectively. A predominant long period of 50 and 85 minutes was observed. This period is estimated to be resonance period in the open ocean than Susaki Bay. Observation results support the hypothesis that the small tsunami had occurred.

A simple analytical method for whole rock trace elements covering a mass range of 45Sc–238U using laser-ablation inductively coupled plasma mass spectrometry (LA-ICP-MS) with a high-dilution ratio (sample:flux = 1:10) glass bead for X-ray fluorescence spectrometry (XRF) has been established. The reproducibility (shown as relative standard deviation of signal intensities) of analytical results of the Geological Survey of Japan (GSJ) geochemical reference materials was mostly < 30%, except for elements of very low contents. A comparison with the compilation values from literature values and the analytical results of this study show < 30% difference (DIF) for 194 out of 225 elements analyzed from JB-2, JA-1, JR-1, JGb-1 and JG-1a. Results of > 30% DIF were elements of very low contents in most cases. Analytical results of JB-1b obtained in this study were concordant with the literature values. The quantitative values obtained in this study can be used for petrological and geochemical discussions of whole rock trace elements.