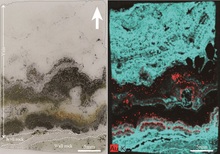 Thin section photo of high-grade Au-Ag ore from the Hishikari vein deposit (left) and its X-ray mapping images of elemental distribution for Au and K (right).

The thin section, polished with diamond abrasives (1μm), was prepared by the Geological Sample Preparation Group, Geological Museum, Geoinformation Service Center. The thick arrow indicates the growth direction and dotted line represent the boundary between the vein and wall rock. The white areas in the vein mainly consist of adularia (KAlSi3O8) and quartz, while the dark-colored areas are abundant in Au-Ag minerals (e.g., electrum). The X-ray mapping analysis was performed with a micro-X-ray fluorescence (μ-XRF) analytical instrument (Bruker, M4 TORNADO in GSJ-Lab, AIST). The X-ray map shows distinct difference between the distributions of Au (red) and K (light-blue), and repeated precipitation of Au (see text 1-14 pages for more information).

(Photograph and Caption by Toru Shimizu)

Micro X-ray fluorescence (μ-XRF) instrumentation (Bruker M4 TORNADO) was used to investigate the elemental distribution in hand specimen and at microscopic scale of the surface of bonanza ores from the Ryosen veins in the Hishikari epithermal Au–Ag deposit. The X-ray mapping results show that the metallic elements (Au, Ag, Cu, Fe, Zn, and Se) and sulfur are correlated. However these elements are negatively correlated with potassium with a spatial resolution of tens of micrometers.

Microscopic observations indicate that the following vein minerals correspond to the enrichment of elements in X-ray images: electrum for Au and Ag, naumannite for Ag and Se, chalcopyrite for Cu, Fe, and S, sphalerite for Zn and S, and adularia for K.

Combined with the previous studies of reaction path modeling and experiments regarding Au and Ag precipitations from bisulfide complexes in boiling fluids, the negative correlation between Au and K is interpreted as being the result of a kinetic effect on electrum deposition. Electrum precipitates as a result of the concurrent decomposition of the bisulfide complexes Au(HS)2- and Ag(HS)2- after the formation of adularia when the influence of H2S gas loss becomes dominant over that of the initial increase in pH that favors adularia precipitation.

In 2009, it was decided to make the Quaternary with its base at approximately 2.6 million years ago. Corresponding to this revision, Geological Survey of Japan, AIST has published VOLCANOES OF JAPAN (third edition), including Gelasian volcanoes (Nakano et al., 2013). Sasamoriyama Volcano, which is located in the southwestern part of the Fukushima City, NE Japan, is one of such volcanoes. This consists of an andesitic composite edifice in 3.7 to 2.0 Ma. Around the edifice, there are dacite pumice flow deposits, which is newly named as the Horai Pyroclastic Flow Deposit. Fission-track ages of zircons from two samples of this deposit were determined as 1.8±0.3 Ma and 1.9±0.2 Ma, respectively. These ages represent the final activity of Sasamoriyama Volcano.

The conspicuous travertine develops on the lower terrace of Ouchiyama River, at Aso, Taiki Town, Mie Prefecture, southwest Japan. The AMS 14C age of ca. 130 yrs BP was extracted from a fossil tree leaf in the travertine.

Kanazawa Castle in Ishikawa prefecture, Japan, has various stone walls. They were built from the end 16th century to the early 19th century. Tomuro-ishi was used in stone walls. Mt Tomuro is 8 kilometers to the southeast of Kanazawa Castle. Histograms of magnetic susceptibility of Tomuro-ishi, which are used in 16 stone walls up to the late 17th century, were classified into 4 types. From comparison with that of quarry areas around Mt. Tomuro, quarry area of each stone wall was decided. Quarry area change accords with Tomita (2013a)’s result, which was decided from the comparison of remained stone at old quarry and used stone in stone walls of Kanazawa Castle.