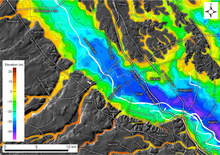 The Arakawa Lowland stretches along the Arakawa River in the southeastern Saitama Prefecture. The Arakawa River joins the Nakagawa River on the east (right) side of this figure, and flows into Tokyo Bay. Beneath the postglacial surface deposits, there is a buried basal topography including a deep valley incised during the last glacial maximum and wave-cut benches formed during the Holocene highstand. This figure was illustrated based on 2580 borehole logs and 4 stratigraphic boring surveys, and interpolated by the inverse distance weighting method. See Komatsubara (2014) in this issue for detail. Traces of expressways, administrative divisions and trains are from National Land Numerical Information, Ministry of Land, Infrastructure, Transport and Tourism.

(Figure and Caption by Junko Komatsubara)

The basal topography of the latest Pleistocene to Holocene incised valley fills under the Arakawa Lowland, Kanto Plain, central Japan is revealed based on 2580 borehole log data. The base of the valley fills in each borehole log is identified based on soil properties and comparison with the data of all-core sampling surveys. These point data composed of longitude, latitude and elevation of valley fill base are interpolated to describe the basal topography by the inverse distance weighting method. The basal map shows a detailed topography of the paleovalley, including buried wave-cut benches and buried terrace planes. The gradient of the paleovalley floor is approximately 1/1000, which is almost the same as that of the neighboring Nakagawa lowland. In some places around the Omiya upland, it would be very difficult to differentiate the Holocene valley fills from Pleistocene strata with similar properties.

A high dilution ratio glass bead with a sample to flux ratio of 1:10 was prepared for a wide range of major element analyses using X-ray fluorescence spectrometer. Calibration curves were determined from 16 rock standards of the Geological Survey of Japan (GSJ) and 4 synthetic samples employing the software of the instrument. The precision of the calibration curves was sufficiently high, and the reproducibility was of adequate quality when compared to the 1:10 glass bead methods in other institutions laboratories. This method enables the measurement of igneous and metamorphic rocks that have extreme or anomalous bulk chemical compositions.