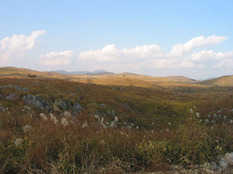 The Japanese geochemical map is the regional spatial distribution pattern of elemental concentrations that was created using about 3000 stream sediment samples and published in 2004. For a comprehensive survey of regional spatial distribution pattern of elemental concentrations both in terrestrial and marine environment, marine geochemical map was further produced after five years. The spatial distribution patterns of elemental concentrations of stream sediments reflect faithfully the distribution of geology and mineral deposits. However, the exception is limestone bedrock. The stream sediments derived from a large-scale limestone bedrock were significantly poorer in calcium and strontium than other sediments. Stream sediments were sampled from Akiyoshi-dai in Yamaguchi Prefecture, where is underlain by the largest-scale limestone bedrock region was selected to elucidate the particle transfer process in limestone region. I took photograph in Akiyoshi-dai from the Akiyoshi-dai karst observation platform after sampling. A Japanese silver grass swing by wind lets you fell autumn of Akiyoshi-dai.

(Photograph and Caption by Atsuyuki Ohta)

In order to obtain the geochemical knowledge of material cycle as a tracer and to contribute
the concern of inhabitant about safety after the accident of the Fukushima Dai-ichi Nuclear Power Plant(FDNPP), the aerosol observation at the GSJ was continued and the new data in 2012 are reported in this paper.
The Cs radioisotope concentrations in the air decreased from April 2012 when the southerly wind often blew instead of northerly wind and rainy day increased. Several increases in the observed concentration were ascribed to the re-suspension of deposited particles by strong wind. The meteorological effect on variation of Cs-137 concentration in 2011 was re-examined in this study by the use of back trajectory analysis, which clarified that the air mass which had passed over the FDNPP arrived at the GSJ when the high concentration was observed. Measurement of the samples with known concentration showed that there seemed to be no problem on measurement system in this study.

The Nanjō Mountains located in the central region of Fukui Prefecture, Southwest Japan, are chiefly underlain by the sedimentary complex of various rock-types such as basalt, limestone, chert, mudstone and sandstone. Among these rocks within the mountains, twenty-seven chert outcrops (localities) were explored for their radiolarian content. Twenty-six rock samples from seventeen localities in the studied Kanmuri Yama district yielded moderately- to poorly-preserved radiolarian remains as a result. Most of the samples contain Triassic to Middle Jurassic species, with Spumellaria and Entactinaria dominant among the Triassic faunas and with Nassellaria dominant among the Jurassic faunas. The description and faunal analysis of these radiolarians revealed that the cherts in the Kanmuri Yama district span a wide range of age from the Late Olenekian to Middle Bathonian stages.