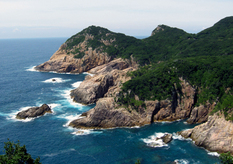 The Ashizuri Peninsula is composed of Miocene plutonic rocks intruding into the early Miocene accretional complex of the Shimanto Surpergroup. The rocks are composed of gabbroids mingled with granitoids (30 %), alkaline granitoids (35 %), and biotite granites (35 %). The alkaline granitoids, occurring in the southern half associated with the gabbroids, are dominant in albite-bearing orthoclase, hence syenitic, and rich in zirconium (600-1,200 ppm), containing visible zircon with naked eyes. Titanite, allanite and REE accessory minerals are common, and therefore the REE contents are the highest among the Japanese granitoids. The granitoids belong to shoshonite-high-K series originated in small amount of melting of mafic igneous source rocks. Mixing of the magmas with sedimentary wall rocks is important to form the biotite granite.

The Cape Ashizuri body is a small, 12 km2, Miocene plutonic complex having gabbroids, syenite, quartz syenite to syenogranite in its southern half and biotite monzogranite in its northern half, right next to the Shimanto accretionary sediments. Chemical analyses indicate that the granitoids have mostly meta-aluminous value of A/CNK < 1.0, except for three monzogranite. The granitoids are rich in K2O, plotted in the shoshonite-high K fields. The granitoids are also rich in Na2O and Rb. Ga content is higher than 18 ppm, indicating characteristics of the A-type granitoids. A distinct characteristic of the Cape Ashizuri granitoids is predominance of HFSE (high-field- strength-element), such as Zr ( < 1,220 ppm), Hf (25.6 ppm), Nb ( < 202 ppm), Ta ( < 14 ppm), LREE ( < 1002 ppm), HREE ( < 50.5 ppm), Y ( < 74 ppm), Th (74.2 ppm). Fluorine is also enriched up to 0.43 wt.%.
These HFSE are contained in such common accessory minerals as zircon, ilmenite, allanite and titanite, and rare minerals of fergusonite, chevkinite and others. Zircon is the most common and visible rarely by naked eyes. Zircon in the highest Zr rock, 58A142 sample, contains the maximum values of 2.4 wt.% HfO2 and 1.0 wt.% Y2O3. Ilmenite in the 58A142 sample shows 4.3-5.7 wt.% MnO, but that in other quartz syenite shows lower values as 1.7-1.8 wt.% MnO, while its niobium content, up to 3.8 wt.% Nb2O5, is seen along the rim, indicating the niobium concentrated at the latest magmatic stage. Allanite shows Mn-poor character of the magnetite series (0.44 wt.% MnO), and contains 24.6-25.8 wt.% LREE.
The most mafic phase of the gabbroids is 47.0 wt.% SiO2 and 12.5 wt.% MgO, indicating its origin of the upper mantle. Quartz syenitic rocks have 55-60 wt.% SiO2 and low Sr0 ratio of 0.7035, implying a small degree of the partial melting of mafic igneous source rocks in the lower crust for the alkaline rocks. The high contents of HFSE and F were caused by this small degree of the partial melting. The biotite monzogranite in the northern part is considered as a mixed magma generated from the lower igneous crust and overlying accreted sediments of the Shimanto Supergroup. It is interesting to explore hydrothermal REE concentration related to these plutonic and subvolcanic activities.

Microgranular dark-colored enclaves from medium-grained porphyritic biotite granites in the Tanakami Granite pluton were studied petrographically, geochemically and mineralogically. Many of them are ball-like in form with a diameter of ~1~20~ cm. They consist mainly of fine-grained plagioclase, quartz, biotite and several accessory minerals together with porphyritic plagioclase (mainly) and quartz (subordinately). The maximum biotite content is ca. 27 % in mode analysis. The occurrence of alkali feldspar is limited to be as small patches seemingly replacing plagioclase interiors. Their occurrence, textures, bulk rock chemistry, REE patterns, mineral textures and its chemistry seem to be totally consistent with the idea that they are not a product of magma mixing but is a product of early-stage crystallization from the magma forming the medium-grained porphyritic biotite granites as the host rock. The MME often occurs with aplite-pegmatite facies (dykes), which suggests some common circumstances such as relatively rapid cooling conditions catalyzed by some volatile components.

Distribution of some ore metals around the Mau Due stibnite deposits, northernmost Vietnam

Soil and stream sediments were studied geochemically around the Mau Due ore deposits of the northernmost Vietnam. The ore deposits are fracture-filling type occurring in Devonian sediments composed mainly of impure calcareous sediments. The chemical elements brought up by the mineralizations are mainly S and Sb, and small amount of As and base metal. The analyzed surface samples were collected in the wet season (May to September) and the dry season (October to April).
Sb contents of surface materials are sporadically high in the soil samples, and have smaller variation in the stream sediments than in the soil samples. Sb contents of the soil of the wet season, 932 ppm Sb in the average, are higher than the average of 342 ppm Sb of the dry season. The Sb contents are much higher in the stream sediments, averaged as 2,536 ppm in the wet season and 2,504 ppm in the dry season.
Generally speaking, As contents of the soil are positively correlated with Sb contents, but the amounts are much lower than the Sb contents, averaged as 29 and 26 ppm in soil of the wet and dry seasons, respectively, but higher as 68 and 67 ppm in the stream sediments. These abundance data of Sb and As are best explained by both elements are present finest grained sulfides in the soil and river sediments. The Devonian host rocks may be originally high in the Sb contents, as compared with the Japanese eugeosynclinal sediments.