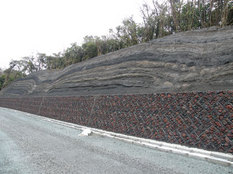 Tephra layer of the Younger Oshima Group emerged due to road construction in the southeast of Izu Oshima. Thick scoria fall deposit in the central part of the outcrop is due to eruption of the Y4 (AD1421?) period.

(Photograph and Caption by Yoshihisa Kawanabe)

New accelerator mass spectrometry (AMS) 14C ages from some tephra units of the Younger Oshima Group of Izu-Oshima Volcano were obtained. Age of the caldera forming S2 period are 1780± 50 yBP and consistent with recent AMS data obtained by other research. The age of S2 period should be revised to be in around 3rd century, about 200 to 300 years older than the previously accepted age from early 1980's. N4 period also shows about 200 to 100 years older than the previous estimated age. The ages of the other periods, N1, Y6, Y5, Y4 and Y2, are consistent with the previously estimated ages by historical records. Since the age of S2 and N4 periods became older, magma discharge rate during S to N period obtained from the tephra volume was smaller than the old estimate, but still two times higher than the magma discharge rate of Y period.

In order to construct accurate geological maps of Japan, K-Ar ages of ten igneous rocks have been determined during fiscal 2008-2011 by the geochronological laboratory of Geological Survey of Japan, AIST. The five volcanic rock samples were prepared as the groundmass fraction, in which large phenocrysts were removed as much as possible using an isodynamic separator. The phenocrysts of biotite and hornblende in five plutonic rock samples were isolated by using an isodynamic separator and heavy liquids. Each data of rock samples determined is associated with rock name, locality, collector, geological setting, K-Ar age, analytical data and geological interpretation.

Cretaceous radiolarians were recovered from three mudstone samples within the Shimanto accretionary complex in the Kitagawa district, Tokushima Prefecture, Southwest Japan. Two of them, red mudstone and gray mudstone, in the Osodani Unit yield radiolarian faunas indicating the ages of late Albian to Cenomanian and late Cenomanian, respectively. Black mudstone within the Taniyama Unit includes a representative radiolarian fauna presenting a Turonian age. Based on the age determination by our present data together with the radiolarian evidences reported from surrounding area, the accretionary age of the Osodani Unit is constrained to be Turonian to early Coniacian, and those of the Taniyama Unit is reinterpreted as the age of Turonian to Santonian. New findings of radiolarian fossils in the Kitagawa district help establish the age constraint for the Cretaceous Shimanto accretionary complex in eastern Shikoku.