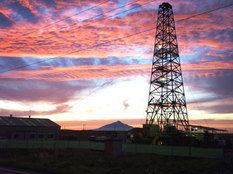 A deep drilling survey for a depth of more than 1,000 m (borehole DD-1) was conducted at Horonobe, Hokkaido. The drilling site locates the coast of the Teshio plain, 300 m apart from coastal line. One of the main purposes of this research project is to develop a methodology for evaluating a deep groundwater environment in the coastal region of Japan. Moreover, regional geophysical exploration from land to sea was conducted and comprehensive analyses were performed.

The Teshio plain is one of the largest Cenozoic sedimentary basin in Hokkaido, Japan. Shallowing-upward thick successions ranging from shelf to terrestrial environments are distributed in and around this plain. The Yuchi and Sarabetsu Formations comprise Plio-Pleistocene sediments deposited in shallow sea to terrestrial environments in the latest stage of sedimentary basin formation. Geological ages of the Yuchi and Sarabetsu Formations are determined on the basis of biostratigraphic and fission track ages, and both formations have contemporaneous heterotopic facies. However, the geological age of the strata in the Teshio plain is unclear because of the thick alluvium covers. We conducted a deep drilling survey, to a depth of 1000 m, in the coastal zone of the Teshio plain and subsequent laboratory analysis (microfossil and tephra analysis) of the core. From the results of this analysis, it is clear that the geological succession is as follows: alluvium to a depth of 87.8 m; the Sarabetsu Formation at depths ranging between 87.8 m and 471.5 m; and the Yuchi Formation at depths ranging between 471.5 m and 1,004 m. Palynological successions of the Yuchi and Sarabetsu formations were divided into three pollen zones. Further, the Larix zone, which had formed after 1 Ma, has been confirmed at depths between 90 m and 220 m. Tephra, which is approximately 1.5 Ma, has been discovered at a depth of 930 m. The diatom zone has not been recognized because most diatom fossils are redeposited species. However, the presence of confirmed species is consistent with other analytical results. The geological age of both the Yuchi and Sarabetsu Formations, in the study area at depths between 90 m and 1,000 m, is estimated to be in the range of 0.8 to 1.5 Ma. In addition, the fact that both these formations are contemporaneous heterotopic facies until they reach Teshio plain is widely accepted. Moreover, both the strata in the Teshio plain are at least 0.5 million years younger than the strata in hilly areas to the east.

The Nanjō Mountains cover an approximately 300 km2 area of central Fukui Prefecture, in Southwest Japan. The mountains extend eastward from the east coast of Tsuruga Bay and are topographically separated from the surrounding mountains by high-angle faults. In terms of the geotectonic division, the Nanjō Mountains belong to the Ultra-Tamba belt to the north and to the Mino belt to the south, which are defined by Permian and Jurassic sedimentary complexes, respectively. These complexes are bounded by a northward-dipping low-angle fault.
The sedimentary complex distributed in the Ultra-Tamba belt in the Nanjō Mountains is called the Higashimata Complex, the main outcrops of which are observed in the northern margin of the mountains, and is thought to have formed along the convergent margin where the oceanic plate was subducting beneath the paleo-Asian continent during a late part of the Permian Period. The Higashimata Complex is primarily composed of terrigenous clastic rocks such as phyllitic mudstone and massive to stratified sandstone, together with lesser amounts of siliceous mudstone, felsic tuff and chert. Among these rocks, sandstone and phyllitic mudstone are the most dominant components, while felsic tuff and chert are rarely found in this complex. Generally speaking, the stratigraphic succession consists of phyllitic mudstone, interbedded mudstone and sandstone, and massive to stratified sandstone. Arranging these elements from the base to the top results in an upward-coarsening and thickening sequence. The basal phyllitic mudstone is normally up to 150 m thick, the interbedded sandstone and mudstone is 100 – 200 m thick, and the sandstone is 400 – 500 m thick. This succession is repeated several times in the complex, which has a total thickness of 5,200 m at the highest point.
The largest and principal structure of the Higashimata Complex is a broad east – west trending homocline, that dips gently to moderately northward. The general strike is approximately east – west trending, but it is weakly folded with northward-plunging axes. The main faults at the base and the upper sections of the Higashimata Complex are the basal low-angle fault and high-angle faults, respectively. The basal low-angle fault separates the Higashimata Complex from the underlying Mino sedimentary complex, although the movement along the fault plane is not clearly evident. In contrast, the high-angle faults pass in an approximately east – west trend and remove the upper sections of the Higashimata Complex, that were originally covered by the Cretaceous Asuwa Group.
Radiolarian fossil discoveries in the Nanjō Mountains have been reported in previous studies. These fossil assemblages primarily consist of genera Follicucullus, Entactinia, Ishigaum, Pseudotormentus, Haplentactinia, Cauletella, Raciditor and Stigmosphaerostylus, and were found in siliceous and tuffaceous mudstones at four localities. The age of the Higashimata Complex can be determined based on this radiolarian evidence, and indicates formation in the late Middle to Late Permian Period.