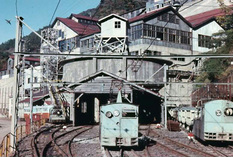 Polymetallic veins of the Ikuno-Akenobe mines are world famous subvolcanic type containing minable amounts of Au, Ag, Pb, Zn, Cu, Sn and W minerals. The mining was initiated in 807 for silver and moved to base metals and tin and tungsten in recent years, and stopped the production in 1987 by rapid change of yen-dollar exchange rate. The veins were mined in underground and the ores were transported from the central shaft to the Mikohata dressing plant by train for 6 km, which was open for public with a penny ticket.

(Photo and caption by Shunso Ishihara)

The Ikuno and Akenobe vein deposits are known to be typical subvolcanic type being hosted in the Late Cretaceous volcanic rocks in the Ikuno mine area and in Paleozoic-Mesozoic igneous and metamorphic rocks in the Akenobe mine area. The ore veins have mostly N-S, partly NW strikes and steep dips in the Ikuno mine, and are rich in silver and base metals historically. Tin was found in later years. The ore veins as a whole show a concentric zoning of the central Sn-Cu subzone, surrounded by Sn-Cu-Zn subzone, Zn subzone, Pb-Zn subzone, Au-Ag subzone and barren subzone. The Akenobe veins have generally NW strike swinging to NE in the western part and steep dips. The ores are polymetallic but shown by two different stages of the early Pb-Zn-Cu substage and the later W-Sn-Cu substage.
Late Cretaceous volcanic formation of the Ikuno Group is composed of andesitic, dacitic and rhyolitic lavas and pyroclastic rocks. By the measurement of the magnetic susceptibility and microscopic observations, these volcanic rocks are found to belong generally to the I-type magnetite-series. These rocks are plotted K-rich calc-alkaline rocks in the variation diagram. Rich ores tend to occur associated with basaltic and rhyolitic dikes in the Ikuno mine. Cu- and Sn-rich ore fluids may be originated in the basaltic and rhyolitic magmas, respectively. Abundant dikes, mostly post-ore though, in the Akenobe mine indicate that the I-type magnetite-series magmatism with wide range of compositions prevailed in this mine area and supplied the ore fluids to the early stage base metal mineralizations. But the second stage of Sn-rich ore fluids may be derived from an I-type ilmenite-series granitic body still hidden.

Case study of zircon from a pegmatite in the Tanakami Granite pluton, central Japan: Occurrence, morphology, texture and chemical composition

Zircon grains were collected from the graphic and large-crystal zones of a pegmatite dyke in the medium-grained porphyritic biotite granite within the Tanakami Granite pluton. Type I (relatively large tabular zircons of 0.05-1 mm in width and 3 mm-1 cm in length with considerable shape variation) and Type II (finer string zircons of 0.01-0.05 mm in width and 1-3 mm in length) zircons coexist in the graphic zone and large-crystal zone. BSE images and element maps show the morphological, textural and chemical differences between the Type I and Type II zircons. Many Type I zircons consist of clear interiors with zoning textures and spongy rims with mottled textures having many micropores, although some Type I zircons are clear almost over a grain. Type II zircon strings are generally spongy and show mottled textures. These textures are mainly controlled by the distribution patterns of Zr, Hf, (U+Th), REE and P. The totals of chemical compositions (wt.%) of Type I clear zircon are around 100 wt.% with stoichiometry, but those of Type I and Type II spongy zircon, are often below 95 wt.% approximately with stoichiometry. Especially, the totals of chemical compositions of Type II zircons are often below 90 wt.%. These textural and compositional data suggest that Type I clear zircons preserve primary compositions in spite of metamictization, and that spongy zircons of Type I and Type II underwent secondary hydrothermal reactions. It is compositionally noted that, differently from the Type II zircons, the Type I zircons are richer in UO2 among the Japanese pegmatite zircons.

Jurassic granitoids intruding into the Hida and Sangun metamorphic rocks in the central Sanin District, Japan

So-called " Older Granites " are distributed in Paleogene granitic terrain of the eastern Shimane and westernmost Tottori Prefecture region, and some petrographical studies including U-Pb dating on the contained zircon were performed and reported here. These granitoids are weakly foliated quartz diorite to granodiorite in composition, and fine-grained secondary biotite was formed close to the contact with Paleogene biotite granites, thus indicating older than Cretaceous in age. The contained zircon showed 198.6 ± 2.7 Ma, thus the earliest Jurassic. The Jurassic granitoids could well be correlated to those of the northern Hida Belt, but here they occur with both the Hida high-T/low-P type and Sangun low-T/high-P type metamorphic rocks. The Jurassic granitoids are considered as an independent plutonic product formed much later than the regional metamorphic rocks.