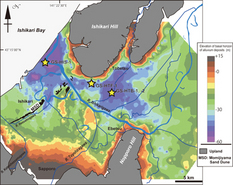 The Ishikari lowland is underlain by the thick Chuseki-so representing Japan. We have produced the contour map of the basal horizon of the Chuseki-so, based on the borehole database, which consists of borehole log data that a government organization and local self-governments such as Hokkaido Prefecture and Sapporo City. The elevation level and soil classification of each borehole data have been checked for the quality identification of data.
The contour map demonstrates that R. Ishikarigawa was flowing through the south margin of the Ishikari hill during the Last Maximum Glacial. In addition, it figures out the geomorphologic feature of buried fluvial fans formed by both R.Toyohiragawa and R. Hassamugawa, and north-directed three-lined rises in the northern Sapporo City. In respect of a position, these rises can be correlated to the Tsukisamu, Barato and NishiSapporo anticlines, respectively.

The stratigraphy and sedimentary facies of the latest Pleistocene to Holocene incised-valley fills were analyzed at Oyafune, Ishikari, in the Ishikari coastal plain, Hokkaido, northern Japan. A core sample, named GS-HIS-1, was obtained at a site in the present strand plain, where the axis of the paleo-Ishikari River valley was located in the Last Glacial Age. The core sediments can be divided into seven stratigraphic units: flood-plain deposits (Unit 1), gravelly river deposits (Unit 2), meandering river and tidal river / salt marsh deposits (Unit 3), inner-bay deposits (Unit 4), lower-shoreface deposits (Unit 6), lagoonal deposits (Unit 7), and upper-shoreface to foreshore / backshore deposits (Unit 8), in ascending order.
The lower shoreface sands (Unit 6) erosively overlie the inner-bay deposits (Unit 4), and the erosive boundary is considered to be a wave ravinement surface. Delta-front / delta-plain deposits (Unit 5 in Kawakami et al., 2012a; b) on inner-bay deposits in inland area are absent at the drilling site. Units 6 – 8 constitute a prograding sand body, which was formed after the mid-Holocene sea-level highstand. The muddy deposits (Unit 7) intercalated with this sand body yield abundant freshwater diatom species, and they were probably deposited in a lagoonal fluvial channel running parallel to the shoreline. The channel would have been rapidly buried as a result of shore progradation.
The sediment accumulation curve provides information on the timing of periods of environmental change at the studied site. As the sea level rose, the sedimentary system changed from a gravelly river to a meandering sandy river at about 13,000 cal BP. The river was influenced by marine water intrusion after 10,600 cal BP, and the inner-bay environment was generated around 8,900 cal BP. The shallow marine sands prograded onto the wave ravinement surface after 5,300 cal BP.

Identification of marine sediments inferred from diatom fossil and lithofacies in the drillcores in central Kanto Plain, Japan