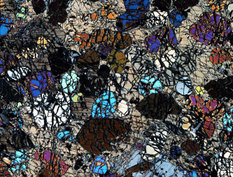 It is known that a number of small-scale mafic plutonic bodies are distributed in the Ryoke Belt. The Uzukiyama Mafic Plutonic Complex is one of the plutonic bodies crystallized from the most primitive magma in the Ryoke Belt. The photomicrograph shows co-crystallization of cumulus spinel and olivine equilibrium with magma, and post cumulus growth of pyroxenes from trapped melt. The most magnesian olivine in this spinel-olivine cumulate is Fo85 and thus the cumulate is interpreted as a primary product of crystallization from mantle-derived primitive melt. Crossed polars, field of view is ~6.0 mm.

(Photograph and Caption by Toru Yamasaki)

The detailed stratigraphy and sedimentary facies of the latest Pleistocene to Holocene incised-valley fills were analyzed at Futomi, Tobetsu, in the Ishikari coastal plain, Hokkaido, northern Japan. A boring core, named GS-HTF-1, was obtained at a site （43 ° 11' 57.78''N, 141 ° 26' 53.53''E） located along the axis of the paleo-Ishikari River valley during the last glacial age.
The succession in the core can be divided into four stratigraphic units on the basis of sedimentary facies, diatom assemblages, molluscan fossils, and AMS radiocarbon ages: gravelly river deposits （Unit 2; 60.0-51.0 m below the ground surface), meandering river deposits （Unit 3; 51.0-22.4 m), inner-bay, bay-mouth to delta front deposits （Unit 4; 22.4-8.6 m), and salt marsh and fluvial （delta plain） deposits （Unit 5; 8.6-1.5 m), in ascending order.
The physical properties of the sediments correspond to their sedimentary facies and stratigraphic positions. The pH and EC （electric conductivity） values of the muddy sediments are in good agreement with the interpreted depositional environments, i.e. the sediments of Unit 4 provide relatively higher pH and EC values than other units, although the inner-bay mud （Unit 4-a） show low values same as the fluvial deposits.
The accumulation curve constructed based on the AMS 14C ages of twelve samples provides information on the timing of periods of environmental change at the studied site during a Holocene transgression: （1） the onset of deposition in a meandering river system, succeeding a gravelly river system, occurred at about 12,000 cal BP; （2） the inner-bay environment rapidly expanded to the study site at around 9,000 cal BP; （3） the bay-mouth sands prograded landward on the inner-bay floor due to rapid sea-level rise at around 8,000 cal BP, and the sands retrogradationaly aggraded during a sea-level highstand of 8,000-7,000 cal BP; and （4） the delta front deposits covered the bay-mouth sand body at around 7,000 cal BP.