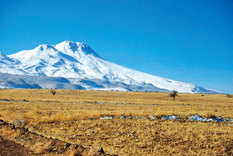 Hasan volcano from the north foot

Mt.Hasan (3,268 m or 3,253 m) is a composite stratovolcano, which is near the center of the Central Anatolian volcano complex in Turkey. Topographic features of lava dome, flow and deposition of clastic materials are visible from the north foot, near Ihlala, which is famous for the group of cave church along the dissected valley. Paleomagnetic study of the rocks from this volcano show normal magnetic polarity, and is concordant with the reported radiogenic age data in Brunhes normal epoch.

(Photograph and Caption by Shigeru Suto)

Paleomagnetic study of the volcanic rocks from the geothermal area in the Central Anatolia, Turkey.

Paleomagnetic study of the volcanic rocks from the Central Anatolia, Turkey, was carried out as a part of the cooperative research program about the geothermal resources in the area, between the MTA and the GSJ. There are two large stratovolcanoes, Hasan dağı and Erciyes dağı, many monogenetic volcanoes which are composed of lava dome, lava flow, pyroclastic cone, and maar in the studied area of 200 km from the east to the west and 150 km from the north to the south. Portable fluxgate magnetometer was used in the field and astatic magnetometer was used in the laboratory for magnetic study. The volcanic rock from Hasan dağı and Göldagı shows the normal and reversed magnetic polarities respectively. The result is concordant with the reported radiogenic age data and standard magnetic time scale. And also the magnetic direction of each blocks from the outcrop in some of the unsolidified pyroclastic deposit on the flank of Hasan dağı tend to be concentrated to the north direction, and were considered to be settled at higher temperature than the Curie point by the field experiment.

New stratigraphy of the recent ejecta on the eastern flank of Fuji volcano, Japan.

The pegmatite deposits at the Umanotani-Shiroyama mine, the largest producer of K-feldspar and quartz in Japan and characterized by a simple mineralogy, dominated by quartz and K-feldspar with minor muscovite and plagioclase, are hosted in the ilmenite-series Masago Granite. The ore zones are classified into the following three zones based on the distance from the host granite inwards: (1) marginal; (2) transitional; and (3) central ore zones. Crystal grain size increases in this order with the resultant occurrence of gigantically grown crystals of quartz in the central ore zone. The evidences presented here reveal that the pegmatite deposits were formed during the latest stage of crystallization and differentiation of the granitic magma being responsible for the Masago Granite. They include: (1) close temporal and spatial association of the granite and the pegmatite deposits (about 95 to 90 Ma), (2) common occurrence of macroscopic “graphic intergrowth” displayed by quartz and K-feldspar in orebodies, (3) common occurrence of melt inclusions trapped in “ore quartz” and “ore K-feldspar&rdquo, (4) common occurrence of perthites observed in “ore K-feldspar” and (5) inheritance of oxygen isotopic signature, especially of quartz, from the surrounding biotite granite. The δ18O values of quartz, whether in the related igneous rocks or in ores, are almost the same, around +12 ‰, while those of K-feldspar in the igneous rocks is around +11 ‰ and those in ores are significantly depleted in 18O, about +7 to +8 ‰. It might be due to the difference in the exchange reaction rate of oxygen between quartz and K-feldspar. Abundant two-phase (liquid+gas) fluid inclusions are trapped in &ldquoore quartz” and &ldquoore K-feldspar”, as well as in the related igneous rocks. Their presence strongly indicates that hydrothermal fluids, possibly admixture of magmatic fluids released from the Masago Granite and circulating meteoric water, entered to the magmatic-hydrothermal system and circulated through the orebodies mainly during the later phase of the pegmatite formation. Measured homogenization temperatures of two-phase inclusions trapped in “ ore quartz” are in the following ranges : 250 to 400 °C in the marginal ore zone; 230 to 370 °C in the transitional ore zone; 240 to 340 °C in the central ore zone. Also suggested is that late circulation of hydrothermal fluids lasted for not so long time as to affect the δ18O values of quartz within the magmatic-hydrothermal system, resulting in escape of the fluids from the system through ubiquitously observed quartz±muscovite veins and fissures.

The Nanjo Mountains located in Fukui Prefecture, Southwest Japan are chiefly underlain by sedimentary complexes of various rock-types such as basalt, limestone, chert, mudstone and sandstone. A lot of reports on the occurrence of Mesozoic radiolarians mainly from mudstones in the mountains have been appeared in the last three decades, however litho-chronological information on Paleozoic rocks of the complexes is still not obtained enough because Paleozoic radiolarians have rarely been found. Through the present work, moderately- to poorly-preserved radiolarians recovered from tuffaceous and siliceous mudstones and cherts in the Nanjo Mountains are described and illustrated herein; they include genera Albaillella, Follicucullus, Pseudoalbaillella, Latentifistula, Pseudotormentus, Cauletella, Ishigaum, Raciditor, Srakaeosphaera and Stigmosphaerostylus, most of which are representatives of Middle and Late Permian periods. These radiolarian species are very important for giving an age constraint to the sedimentary complex in the Nanjo Mountains.

Ground Upheaval Estimated from Decreased well water before the 1946 Nankai Earthquake
– As an Example at Saga District in Kuroshio-town, Kochi Prefecture –.

There are the witness testimonies of the inhabitants that the water level of well water decreased 2-3 m before the 1946 Nankai earthquake (M8.0). In the small delta or the sandbar where fresh water balanced with seawater, Umeda et al. (2010) showed that the well water largely decreased by a little upheaval of the ground, qualitatively .The quantitative relation between the water level of well water and the upheaval of the ground was obtained based on Umeda&rsquos model and the structure of underground water at Saga district which is small delta.

Seven trace elements (As, Cr, Ga, Pb, S, Th and V) compositions of granitic rocks in Awaji Island were analyzed using X-ray fluorescence spectrometer at Fukuoka University. Rare earth elements (REE) compositions of some samples of the Granitic Rocks II and III from the island were also determined by instrumental neutron activation analysis at Ehime University. The variation trends of most trace elements of Granitic Rocks I, II and III overlap in Harker’s diagrams. Samples, which were off main trend of major and trace elements in Harker’s diagrams in previous analyses (Yuhara et al., 1998), are often off the variation trends of these trace elements in this study as well. Therefore, these trace elements are also useful for investigation of chemical variations of granitic rocks. Chondrite-normalized REE patterns are enriched in LREE and flat in HREE, and fit in those of granitic rocks in the Ryoke metamorphic belt.