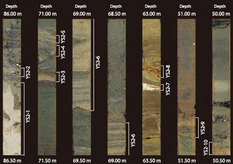 The Kanto Plain of central Japan is widely underlain by the Pleistocene Shimosa Group. The photograph shows the Middle Pleistocene tephra layers intercalated in the 94-m-long GS-YS-2 core recovered from Yashio, Saitama Prefecture, central Kanto Plain. YS2-1 and YS2-2 tephras are correlated with TE-5a and TE-5b, respectively. YS2-3, YS2-4, and YS2-6 tephras can be identified as A2Pm or A3Pm of the Omachi APm series. YS2-7 is possibly correlated with BT72. Of them, TE-5a, known as a widespread tephra indicating MIS 11, is useful as a marker tephra to understand basin morphology beneath the Kanto Plain. See Sakata et al. (2011) in this issue for details.

(Photograph and Caption by Kentaro Sakata)

Sedimentary facies and tephrochronology of the Pleistocene Shimosa Group in the GS-YS-2 core recovered from Yashio, Saitama Prefecture, central Japan are examined. Our detailed examination reveals that the depth range of 37.02-94.40 m which corresponds to the Shimosa Group is divided into 10 lithofacies units, A to J. Of them, Units G and J are composed mainly of humic mud interpreted as marsh facies. Units A, D, E, and H are characterized by bioturbated sandy mud and/or muddy sands indicating bay facies, and Units B, F, and I consist of well-sorted sands interpreted as shoreface to beach facies. We recognize four depositional cycles corresponding to the formations in the standard division of the Shimosa Group. Each of them comprises the marsh, bay, and shoreface to beach facies in ascending order. Consequently, the examined interval in the core section is divided into four formations; they are Formation I (Units A and B), Formation II (Units C, D, E, and F), Formation III (Units G, H, and I), and Formation IV (Unit J).
The core section intercalates some tephra layers. The lowermost tephra layer in the core section is A1Pm (TE-5a) of the Omachi APm series, known as a marker tephra indicating MIS 11. It is intercalated in Formation II. A tephra layer which is similar to BT-72 considered to have falled at MIS 10, is recognized in the lowermost part of Formation III. Therefore, Formations I to IV are correlative with the Kasamori Formation of the Kazusa Group, the Jizodo Formation, the Yabu Formation, and the Kamiizumi Formation of the Shimosa Group, respectively. The correlation between the GS-YS-2 and the other cores in the central Kanto Plain makes it clear that each formation of the Shimosa Group becomes thicker and represents deeper distribution northeastward from the GS-YS-2 drill site. These characteristics are distinctive particularly in the lower formations. These indicate that the area northeast of the GS-YS-2 drill site was continuously subsiding during the deposition of the Shimosa Group.

To elucidate processes of Cr(VI) reduction by humic acids in soils, humic acids reacting with Cr(VI) were characterized using IR and X-ray absorption near edge structure (XANES) spectroscopy. It is expected that oxidation of humic acid by Cr(VI) gives rise to the formation of aldehyde, ketone, and carboxyl species. However, no significant increase of IR-bands assignable to these functional groups has been reported. Instead, IR absorption spectra of humic acid oxidized by Cr(VI) show similar features to those of humic acid reacting with Cr(III). Consequently, the types and proportions of functional groups of HA substances did not differ significantly among experimental conditions. The IR spectra of humic acid reacting with Cr(III) and Cr(VI) show increased intensity of IR bands at 3400 cm-1, 1608 cm-1, and 1384 cm-1, with decreased intensity of peaks at 1707 cm-1 and 1236-1250 cm-1. Those changes suggest the existence of bonding structures of two kinds: hydrated Cr forming an outer-sphere complex with humic acid, and Cr forming an inner-sphere complex with the carboxylate ligand of humic acid.
The Cr-K edge XANES spectra of humic acid reacting with Cr(VI) suggest that Cr(III), reduced from Cr(VI), binds with humic acid. No systematic difference of XANES spectra was found with increased amounts of Cr(VI) in experimental solutions. These features are consistent with IR absorption spectra. The fractions of two kinds of binding forms suggested by IR spectra were determined from linear combination fitting using XANES spectra of reference compounds: 50% hydrated Cr(III) adsorbed onto HA electrostatically and the remainder of Cr(III) binding to carboxylic acid of HA. However, with increasing pH of experimental solutions, some Cr precipitates as Cr(OH)3·nH2O in the solid phase. The pH level or Cr concentration must be reduced to prevent production of a Cr(OH)3·nH2O precipitate.

A renewed low-level gamma-ray measurement system was developed and its characterization was studied. The cryostat of J-type that means the Ge detector is sideways arranged in parallel with the liquid nitrogen Dewar bottle, was effective for the decrease of the background counts. Moreover, the oxygen-free copper with few impurities contributes to the decrease in continuous and peak background counts. It is also effective for removing interference of the indoor radon and thoron to reduce the space of the Pb shield room.
The influence of the geometry of the detector and the sample is estimated to be about 1% change of peak strength with 1mm change of height in the sample container. Therefore, it is necessary to correct the peak intensity by the height in the unit of mm or to prepare the samples with the same height accurately. Although the experiment using a point source and the model calculation considering the geometry of the well-type detector showed a similar tendency in relation to the detection efficiency, they didn't show the actual change in counting rate. It turned out that the influence factor of the self-absorption caused by the sample thickness on the detection efficiency is much larger.
In this system, the detection limit of Pb -210 is low because it is not detected on the background, and an excellent measurement is possible in Pb-210 measurements of the sediments. However, a little contamination of Cs-137 remains after the nuclear power plant accident, and it is important to check it in the calculation of the sedimentation age by Cs-137.

As a part of the studies on elucidation and characterization of colloid, a study on the concentration / separation technique by use of ultrafiltration is conducted and its applicability / validity is discussed using the model experiment – simulations. Although the cross-flow-filtration (CFF) method can concentrate the particles in water, the quantification using only concentration factor is not enough. The time-series sampling and analysis are required for the particles (0 < retention coefficient (Rc) < 1) whose diameter are near the pore size of the filter, because their separation is inadequate. The model experiment - numerical simulation results suggest that the quality of particle separation depends on the ratio of particles with 0 < Rc < 1 in case of the mixture of various sizes. For the critical quantification of colloidal materials, the time-series analysis is necessary. However from the view point of simple and rapid technique, the separation at appropriate concentration factor provides a safer evaluation for the geological disposal of radioactive waste although it gives an overestimation of larger particles.