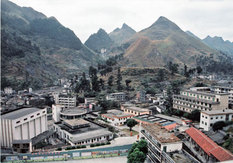 The southern China is covered by abundant carbonate rocks of Paleozoic age, as best represented by carbonate towers in Guilin, but forming generally triangle peaks along common ridges, as seen in this mining town of Dachang. This town was constructed here in the mountain area with limited flat land, because of unique ores of Sn-In-bearing lead-zinc discovered at this area. These ores are hosted along the bedding plane in impure dolomitic limestones of Devonian age having no skarn minerals. The ores occur also in breccias pipes and veins, closely related to small Cretaceous high-level intrusives of granitic compositions. Tin and indium are abundant in many of these ore deposits.

Indium concentration in zinc ores in plutonic and volcanic environments: examples at the Dulong and Dachang mines, South China.

Two largest indium ore deposits of 5,000 tons In class in China, Dulong and Dachang mines, were studied geochemically. The Dulong deposits have 1000In/Zn value of 4.1 in the average, which is similar to 2.6 of the Changpo-Tongkeng orebody and 3.1 of the Longtaoshan orebody of the Dachang mine. Yet the Dulong ores are depleted in silver and antimony, and enriched in tungsten among the ore metals, while the Dachang ores are rich in silver and antimony similarly to the Toyoha ores occurring in the volcanogenic Green Tuff belt in Japan. Concentration of indium in sphalerites is homogeneous in the Dulong ores but is strongly banded in the Toyoha ores. It is suggested that the Dulong ore deposits were formed in a plutonic environment related to S-type ilmenite-series granite, while the Dachang deposits were formed at shallower level, related to subvolcanic intrusions. A volcanogenic environment is necessary to concentrate indium in tin-polymetallic ore deposits.

The Shionofuchi-biotite (Sbi) tephra was found from the Middle Miocene Nanatani Formation at Shionofuchi, Sanjo City, Kamo District, Niigata Prefecture. The Sbi tephra is a crystal-rich coarse tuff layer (9 cm thick) intercalated between the basalt to andesite volcaniclastic rocks and light gray massive mudstone of the Nanatani Formation. This tephra contains plagioclase (oligoclase and bytownite in composition), quartz, sanidine, biotite, opaque minerals and a trace amount of zircon and allanite. Fission-track age of Sbi tephra was determined to be 13.8 ± 0.3 Ma (1σ ). This age is consistent with the biostratigraphic data. The Kbi tephra that is correlated to the Muro Pyroclastic Flow Deposit in Kii Peninsula is intercalated in the similar horizon to the Sbi tephra. Furthermore, the lithofacies of the Sbi tephra resembles that of the Kbi tephra. However, according to the inconsistency of plagioclase composition, trace heavy mineral assemblage and uranium contents in zircon, the Sbi tephra is not correlated to the Kbi tephra. Therefore, we have to pay attention to correlate these tephras.

Pollen data from Pleistocene sediments in the GS-SB-1 drilling core, obtained from Shobu Town, Japan, provide a basis on which a pollen biostratigraphy for subsurface geology of the central Kanto plain is constructed. In this study, 150 sediment samples were collected at ca. 2 m intervals from the GS-SB-1 core, which consists mainly of marine and fluvial sediments intercalated with two major Pleistocene marker tephras. The Pleistocene sediments in the GS-SB-1 core were divided into 35 local pollen assemblage zones in an informal nomenclature by a distinctive assemblage of taxa, indicating local environmental conditions as a rudimentary biostratigraphic classification. Each of the marker horizons for Upper, Middle and Lower Pleistocene pollen biostratigraphy was discussed. Moreover, stratigraphy of local pollen assemblage zones was established on the basis of magneto-, litho- and tephrostratigraphy. On the other hand, the SB-Pol-9 and SB-Pol-24 zones in the core are currently a barren interval with the significantly low occurrence of tree and shrub pollen grains. Therefore, the pollen biostratigraphic characters of these zones need to be investigated in other cores further.

Implementation of a New Analysis Strategy to the Routine Processing System of the Continuous GPS Network of the Geological Survey of Japan, AIST.

We implemented a new analysis strategy for the routine GPS data analysis system of the continuous GPS network of the Geological Survey of Japan, AIST when two new continuous GPS observation stations in Shikoku and Kii Peninsula were installed in 2010. We updated the Bernese GPS software package from Version 4 to 5, and implemented some new methods such as estimation of the troposphere delay gradient as well as the zenith total delay. Comparing the result with that of the previous analysis strategy, we found that the repeatability of the GPS station coordinates were reduced especially in summer, which we inferred was due to the reduction of troposphere delay errors caused by the spatial variation of water vapor that dominated in summer season.