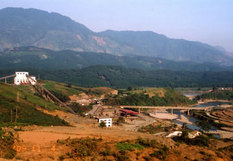 Fault scarf of the Red River Fault at the Sin Quyen mine area, northern Vietnam

The Sin Quyen copper deposits, opened in 2006, are located at the fault scarf of the Red River Fault in the northern Vietnam, which runs from right to left in this picture. The ores are open pitted and transported mostly by belt conveyor system, and chalcopyrite, magnetite and gold are extracted. The ores containing abundant allanite occur as lens shape in mafic metamorphic rocks intruded by granitic dikes. Photographed in autumn 2008.

Mineralogical and chemical characteristics of the allanite-rich copper and iron ores from the Sin Quyen mine, northern Vietnam.

Selected ores from the Sin Quyen allanite-rich Au-bearing chalcopyrite-magnetite deposits were studied microscopically and chemically. The ore minerals tend to occur along the NW-SE-trending sheared zone of altered host rocks; yet the ore minerals show no stress effect, implying the mineralization later than the regional shearing. The ore minerals occur associated with the metasomatic minerals consisting mainly of clinopyroxene, hastingsite, allanite, epidote, biotite, titanite, carbonate minerals and rarely quartz. Allanites containing almost all of the rare earth element (REE) components of the ores occur in disseminated manner and are euhedral to subhedral. The mineral is an early crystallized mineral replaced by magnetite and chalcopyrite. The allanite contains around 16 wt.% REE and is low in mafic components having chemical composition of Mn-poor type, which tends to occur in the magnetite-series granitic rocks in Japan. The REE components could have been derived from an oxidized alkaline granitic activity of mid-Tertiary. Both chalcopyrite and magnetite are well separated by the mineral dressing, and all the allanites moved to the tailings. Therefore, the tailing pond turns out to be an excellent LREE reservoir in future.

Physical properties of Cretaceous to Paleogene granitic rocks in Japan: Part 4. A case of the inner zone of Southwest Japan.

5. Natural Remanent Magnetization (NRM)
No relationship between the density and NRM is observed but there is a correlation between the magnetic susceptibility and NRM. Königsberger ratio (Qn) of about 90 percent rock samples shows less than 0.4.

These results are summarized in Table 1 (physical properties of Cretaceous to Paleogene granitic rocks in the inner zone of Southwest Japan).

K-Ar ages of adularia at the Koryu epithermal Au-Ag deposit, Hokkaido in Japan.

Vertical Crustal Movements along the Pacific Coast of Shikoku before the 1946 Nankai Earthquake.