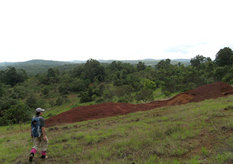 Bauxite prospect in the Bolaven Plateau

The Bolaven Plateau in southern Laos consists of Jurassic-Cretaceous sedimentary rocks and unconformably overlying Neogene-Quaternary basalts. A trench for bauxite exploration is seen in the center of the photograph. There are many trenches in surrounding bauxite prospects and a laterite-bauxite horizon derived from the Cretaceous sandstone without basalts is observed in several meters thick. Immobile elements such as Al, Ga, Fe and Sc are concentrated in the laterite relative to the parent sandstone by weathering. The photograph was taken beside a weathering profile 1604 at 850 m above sea level in this article. The Bolaven Plateau is also famous for coffee production.

Laterization of basalts and sandstone associated with the enrichment of Al, Ga and Sc in the Bolaven Plateau, southern Laos.

Chemical characteristics of the indium-polymetallic ores from the Toyoha mine, Hokkaido, Japan.

High-grade indium-polymetallic ores of the Toyoha deposits, Hokkaido, which mainly belong to the stage IV mineralization, were studied chemically at E-W trending Shinano-Izumo-Iwami Veins, WNW-ESE trending Soya Vein , and N-S-trending Sorachi-Nemuro Veins. The indium contents go up to 1.0 wt % in the ores (Sorachi, -430 mL). Averaged indium contents and 1000 In/Zn ratio are obtained as follows: Shinano Vein(n=29): 568 ppm and 9.0; Izumo Vein (n=7): 582 ppm and 1.9; Iwami Vein (n=17): 371 ppm and 6.4 (n=16, excluding the highest value of 444.6); Soya Vein (n=4) 1,467 ppm and 3.1; and Nemuro-Sorachi Vein (n=5): 4,050 ppm and 9.1. The whole average is 854 ppm (n=62) and 7.1 (n=61). These indium-rich ores occur in the southeastern part of the Toyoha deposit, where the hydrothermal ore solutions were considered flown out from the depth.
Indium contents of the ores are positively correlated with zinc contents on the Shinano Vein (correlation coefficient of 0.65), but unclear on the whole veins (correlation coefficient of 0.51). Positive correlation between indium and tin is only seen locally (e.g., Iwami Vein). Within available level of 500 meters, zinc content decreases but tin and arsenic contents increase with the depth. Distribution of indium has some similarity with that of tin and arsenic vertically. These chemical characteristics suggest that indium was closely associated with tin and arsenic, besides zinc and cadmium in the hydrothermal fluids. Compared with similar indium-rich ore deposits in sedimentary terrains in Bolivia, indium-contents are similar in the two regions. Mafic components such as iron, copper, nickel, cobalt, arsenic, and silver are, however, richer in the Toyoha deposits than in the Bolivian deposits. Manganese, antimony, bismuth and tin are predominant in the Bolivian ore deposits. These chemical characteristics reflect general difference of the host rocks, juvenile mafic volcanics vs. sedimentary and felsic volcanics, of the two regions.

Characteristics and origins of the geothermal waters from the Shiraoi area, and three regional areas surrounding it in the Iburi district, Hokkaido, based on geochemistry and isotope geochemistry -- A case study of the so-called "geothermal-water resources in deep sedimentary basins" and "hot-spring waters obtained by deep drilling" in Japan.

At the Shraoi area located along Pacific Ocean between the west and central parts of Hokkaido, geothermal water of ca. 40-60 °C has been regionally produced in a large amount by 400 to 1,600 m deep drilling since 1960's. A study of geochemistry and isotope geochemistry for characterizing the hydrothermal systems distributed at ca. 1,500 m depth and down to ca. 3,000 m depth, and understanding their origins has been conducted not only at the Shiraoi area, but also in the three regional areas surrounding it (the Quaternary volcanic area to the west, Ishikari Lowland and the Paleogene area to the east) using surface, ground and geothermal waters. The results could be summarized, on the bases of the results of previously-reported various researches for these areas, as following (1) to (4):
(1) The Quaternary volcanic area, corresponding to the eastern-most mountain area of the west part of Hokkaido, where the Quaternary volcanic activity is prominent on the Nogene formations and pre-Neogene basement rocks, is characterized by the various kinds of hot springs naturally discharging. Especially at the Noboribetsu area, where high-temperature fumaroles and acidic alteration zones are observed, the contribution of the magmatic fluids has been estimated to the high-temperature high-salinity acidic to neutral Na-Ca-Cl type hot-spring waters based on the high δD and δ18O values of the waters and others. Around the Karurusu hot-spring area, a hidden deep high-temperature (higher than 200 °C) hydrothermal system was discovered by the exploration-well drilling of the Geothermal Development Promotion Survey.
(2) The Shiraoi area is located in the west part of Hokkaido and corresponds to the coastal plain and hill area along the above (1) the Quaternary volcanic area, although also corresponds to the southwestern-most part of the following (3) Ishikari Lowland. In this area, the above geothermal waters of low-salinity neutral Na-Cl type (enriched in SO4 at the west part and changing to Na-HCO3 type at the east part), and the apparent geothermal gradient (the discharged-water temperature divided by the well depth) reaches as high as 90 °C/km at the west part. The above geothermal waters (especially at the west and central parts) have been estimated to be derived from the hidden deep essential high-temperature hydrothermal system which has been formed from the meteoric waters precipitated at the above (1) mountain area to the west by the conductive heating of the magma chamber and hot igneous body located deep underground, based on the close distribution of the Shiraoi area to the Quaternary volcanoes, the above chemical and thermal characteristics, the isotopic compositions of the geothermal waters (ca. +1,0 ‰ of the δ18O value sift), the various high-temperature values (ca. 200 to 250 °C) estimated using the geochemical geothermometers (Na-K, Na-K-Ca, and water mixing model using SiO2 concentrations), and others. It could be pointed out the similarity between the deep hydrothermal system and the one discovered around the above Karurusu hot-spring area, which is located fairly close to the Shiraoi area. The contributions of the magmatic fluids like the ones at the above Noboribetsu area seem to be small to the hydrothermal system at the Shiraoi area based on the water isotope data. Also, the contributions of the lake waters of Kuttara-ko and Shikotsu-ko, and the seawater and fossil seawater seem to be very limited to the system.
(3) Ishiraki Lowland is a large-scale subsiding region where the thick marine sedimentary rocks of Neogene to Quaternary periods are distributed, and the geothermal gradient is low. The geothermal waters obtained by deep drilling in this region have been classified roughly into two types, namely, the high-salinity neutral Na-Cl type originated mainly from seawater (and fossil seawater) and regionally distributed at the depth, and the low-salinity neutral Na-HCO3 type originated from meteoric water and distributed at the western part and others at the relatively shallow levels in Isikari Lowland. The low-salinity-type water from ca. 1,000 m depth at the Chitose-Rankoshi area, in the western part of Isiraki Lowland, shows specifically low δD and δ18O values, suggesting that its water origin is meteoric water precipitated at ca. 1,000 m a.s.l. in the above (1) mountain area to the west (possibly at the colder period in the past). The low-salinity-type and high-salinity-type geothermal waters discharging from shallow wells at the Umaoi-Matsubara area, in the eastern part of Ishikari Lowland, have been estimated to be produced by the water up-flow from the depth along the active reverse faults and folds distributed at the area.
(4) The Paleogene area, located east to the above (3) Isikari Lowland and being the south and west marginal hill area of Yubari and Hidaka mountains, is characterized by the distributions of thick Cretaceous and Paleogene marine sedimentary rocks with numerous complex reverse faults and folds. The Hobetsu-Murakami mineral spring of low-temperature high-salinity neutral Ca-Na-Cl type water with high δD and δ18O values is probably dominated by the fossil seawater of the late-stage diagenesis for the water origin. At the Yubari coal field located north to the area, the geothermal waters with the similar chemical characteristics have been developed by deep drilling (ca. 57 °C at ca. 1,500 m depth), and the fluid inclusions formed above 200 °C and distributed surrounding the large thrust faults have been observed in the core samples by the National Oil and Gas Exploration Drilling. These suggest that the geothermal waters with fairly high temperatures migrating from the depth are distributed, at least locally, at and around the Yubari and Hidaka mountains, which have been uniquely in an uplifting and fracture-developing environment due to the oblique subduction of the Pacific plate-slab, although the area is located at the forearc region of the Chishima (Kuril) arc.

The 14C ages of the late Pleistocene - Holocene volcanic products erupted from the Haruna volcano.

Late Triassic radiolarian fossils were extracted from siliceous mudstone in an accretionary complex of the Ashio Terrane in the Kamo district (Quadrangle series 1:50,000 of the Geological Survey of Japan), Niigata Prefecture, Japan. The siliceous mudstone occurs as a block within a muddy matrix. The siliceous mudstone also belongs to the upper unit of the Senmi Complex, which is distributed widely in the Kanbara Mountains within the Kamo district. The fauna in the siliceous mudstone consists mainly of species of the genera Canoptum, Betraccium, Cantalum and Fontinella, including Canoptum sp. cf. C. rhaeticum, Fontinella sp. cf. F. clara, Fontinella sp. cf. F. primitiva etc. Based on radiolarian biostratigraphy of these taxa previously documented elsewhere, the radiolarian fauna studied was dated to the Late Triassic (Rhaetian).
This is a first report of Triassic radiolarian fossils from clastic rocks of the Ashio Terrane in the Kanbara Mountains; thus, this find contributes to reconstructions of oceanic plate stratigraphy of the Ashio Terrane in this region.