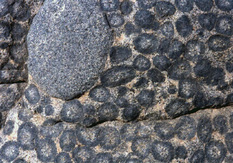 An orbicular granite was discovered at Caldera, North Chile, in the 1980s field work. The granite is actually granodiorite in composition, composed of a ball structure fringed with amphibole aggregates and the matrix filled with salic minerals. The granodiorite contains a disc shaped dioritic enclave (left upper), indicating that the orbicular granite was formed from fluids-rich melts at the latest stage of the granitic magmatism.

Petrochemistry of I-type magnetite-series granitoids of the northern Chile, Highland Valley, southern B. C., Canada, Erdenet mine, Mongolia, Dexing mine, China, Medet mine, Bulgaria, and Ani mine, Japan.

Granitoids from porphyry copper mineralized regions from selected areas in the world were reexamined by the polarized X-ray method. The studied samples in Chile include regional collection of three transects, North, Central and South, including Chuquicamata, El Salvador, Rio Blanco-Los Blances and El Teniente mines. The east-west variation in younging the age toward east is best shown in the North and Central transects. Components that tend to increase toward the inner direction are Al2O3, Na2O, P2O5 and Sr, while those of decreasing are Y, total Fe and V. The innermost is a zone of porphyry copper deposits. Therefore, high Sr/Y granitoids prevail in the innermost and youngest zone.

Other porphyry copper regions studied include granitoids from Highland Valley copper area, southern B. C., Canada, Erdenet mine of Mongolia, Dexing mine of China, Medet mine of Bulgaria, and Ani mine stock of Japan. The studied samples all belong to I-type magnetite-series, according to their magnetic susceptibility and bulk Fe2O3/FeO ratio, and major chemistry. ASI is less than 1.1 (i.e., I-type), except for some altered granitoids. Most granitoids are plotted in the high-K series, but the Highland Valley granitoids are least potassic (low-K to med-K). Some Chilean and Erdenet granitoids are most potassic (high-K to shoshonite). The most pertinent feature for the porphyry copper related plutons is highly oxidized nature.

Porphyry copper mineralized granitoids in Chile, Highland Valley, Erdenet, Dexing, and Medet, tend to have high Sr/Y ratios. This mixed occurrences of adakitic and non-adakitic granitoids can be explained by mingling of the adakitic magmas generated by partial melting of warm subducted ocean floor-altered basalts and some sediments, and non-adakitic magma generated by partial melting of gabbroids in the lower crust. The adakites have had high contents of copper and sulfur, because partial melting of such ocean-fl oor materials were rich in Cu and S. The mingled magmas moved upward; then solidifi ed as a magmatic-hydrothermal plumb-system in the uppermost crust. No adakitic character of the Ani mine stock can be explained by cool subduction slab went down below the NE Japan during the Miocene time.

Diatom biostratigraphy of the middle to late Miocene Nomura and Tokonami Formations in the Tsugawa area, Niigata Prefecture, central Japan.

Glaucophane found from meta-basalt in the Nedamo Terrane, Northeast Japan, and its geologic signifi cance.

The GS-AHH-1 core, obtained from the buried terrace under Adachi-ku in the Tokyo Lowland, consists of facies BR (braided river sediments), TM (tide-influenced shallow marine sediments), TF (tidal fl at sediments), SM (shallow marine sediments), PD-DF (prodelta to deltafront sediments), MT (modern tidal fl at sediments) and AS (artifi cial soil) in ascending order. The Alluvium (latest Pleistocene to Holocene incised valley fi lls), which consists of facies TF, SM, PD-DF, MT and AS, unconformably overlie Shimosa Group (middle to late Pleistocene deposits) of facies BR and TM. The facies TF and SM and facies PD-DF, MT and AS can be correlated to estuary and delta systems, respectively. The Maximum Flooding Surface at the estuary-delta system boundary is dated at 6.9-7.3 cal kyr BP. The facies TF, which consists of bluish gray mud, overlies the facies TM, which consists of greenish gray mud, with sharp boundary. The difference in the color of mud can be a good indicator to identify the Shimosa GroupÅ|Alluvium boundary in this region.

Petrographic properties of 12 layers of Late Pleistocene tephra which can be observed at the southeastern foot of the Akagi Volcano, Gunma Prefecture, central Japan are described. Detailed examination of these tephra layers reveals that Ag-Nm2, Ag-UP, Ag-KP tephras comprise a few fall units representing different refractive indices of orthopyroxene and hornblende crystal grains from each other. Furthermore, Ag-MzP3, Ag-MzP2, Ag-Nm2, and Ag-UP tephras represent largely different refractive indices from the property of the majority of the examined tephras. These petrographic features are important for identifi cation and correlation of these tephra layers.

The formation age of Mikadoishi Lava Dome at Towada volcano was estimated based on the petrological features of eruptive rocks during the post-caldera stage in Towada volcano. The lava dome has dacite compositions (66.4 wt.% SiO2) and contains plagioclase, clinopyroxene, orthopyroxene and Fe-Ti oxide phenocrysts. The petrological features show that the lava dome does not correlate with any tephras from the post-caldera stage. This indicates that the lava dome eruption was not accompanied with notable pyroclastic eruptions. The formation age of the Mikadoishi Lava Dome can be estimated to be sometime within 11.7-2.7 cal kyr BP on the basis of the temporal change of magma compositions in the post-caldera stage.

Sulfur isotopic ratios were studied on representative lead-zinc feeding ores, zinc concentrates and lead concentrates from selected mines in North Vietnam. These sulfi des from the Triassic rhyolite hosted ore deposits have δ34S values of +3.4 to +4.7 ‰, while those from purely Paleozoic sedimentary host rocks are slightly heavier, ranging from +4.4 to +8.2 ‰. No δ34S values similar to those of the Mississippi Valley-type lead-zinc ores have been found. Lead concentrates are always smaller than zinc concentrates in the δ34S values. Two very depleted δ34S values were found in the Cho Dien mine area where detailed isotopic study is necessary.