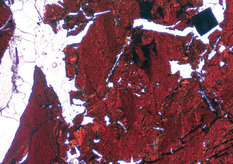 In-bearing sphalerite deposits are known at several places in the Paleozoic sedimentary terrain of South China. Such ore deposits also occur in the continuous sedimentary terrain of North Vietnam. Here In-minerals have not been discovered, and in is contained in black Fe-rich sphalerites. Reddish brown is sphalerite, black mineral in the upper right is pyrite crystal. White vein let at left is carbonate minerals of the latest stage, which cut the sphalerite and other gangue minerals (quartz etc.). The vertical distance is 1.8 mm.

Chemical characteristics of leadzinc ores from North Vietnam, with a special attention to the In contents.

In order to find In-rich sphalerite, Pb-Zn ores hosted in Paleozoic sedimentary rocks including abundant carbonates were studied chemically in the northernmost Vietnam, because both high-temperature In-anomaly and low temperature MVT (Mississipi Valley type) genesis, which could be contradictory, have been proposed in the mineralized terrane. A large variety of Pb-Zn ores was found by this study, such as (1) REE-rich (up to 1,210 ppm) galena-sphalerite subtype (Na Son), which is rhyolite-related with a high-temperature alteration assemblage, (2) In-Fe-rich sphalerite>galena-pyrrhotite subtype (Na Bop and Cho Dien), which is reduced and high temperature type, (3) In-Fe-poor sphalerite> galena subtype (Lang Hich, Mi Tic and Phudo), and (4) Fe-sphalerite> galenarhodochrosite (Cuc Duong) subtype. The latter two subtypes are considered to have formed by low-temperature hydrothermal solutions.

In the Bac Kan region, economically important In-anomalous value was recognized on the Pb-Zn ores from Na Bop mine and weak anomaly in the Cho Dien ores. These ores are composed of Fe-rich sphalerites with pyrrhotite occurring in and around the Cho Dien Dome close to syenite dikes. The In-bearing ore deposits can be formed with high temperature ore solution liberated from hidden fractionated “tin” granitic intrusion of the ilmenite series in the Cho Don area and possibly below center of the Cho Dien Dome, and may have been formed under the highest temperature and reduced condition among the Pb-Zn mineralizations. The highest In-value is Insp of 391 ppm and Zn concentrates value of 898 ppm, both of which are considered to be economical.

We obtained a continuous 45 m-long core from the Miocene sedimentary sequence and basement Cretaceous granite at Kanamaru, northeast Japan. The Miocene sequence intercalates with a uranium-rich seam (U = 25-100 ppm; Th = 23-42 ppm). We analyzed the kerogen and biomarkers in the core to characterize the organic matter.
Visual kerogen analysis indicated that coaly and woody kerogen is abundant in relatively organic-rich samples, while amorphous kerogen is abundant in organic-lean samples. Pyrolysis gas chromatography-mass spectrometry demonstrated that the organic matter in pyrolysates comprises mainly alkyl-aromatic hydrocarbons (alkyl-benzenes, alkyl-indenes, alkyl-naphthalenes, etc.) and n-alkanes. Acyclic isoprenoid alkanes (mainly pristane), n-alkenes, and n-fatty acids were detected as minor components. Most of these compounds are characteristic of the type- III kerogen that derived from terrestrial higher plants. These results suggest that amorphous kerogen originated from terrestrial higher plants, and we speculate that they were heavily degraded by oxidation and lost their woody texture.
Thermal alteration index (TAI) of Pinus pollen was about 2.6, and Tmax values of Rock-Eval pyrolysis range from 441°C to 444°C, which indicate that the thermal maturation of the coaly shale reached the stage of early catagenesis. This maturity was also suggested by high abundance of diagenetically generated isomers of hopanes in pyrolysates. In the sediment sequence, a peak of uranium and uranium/thorium ratio is ca. 2 m shallower than the peak of organic carbon content, but it corresponds to a lithological boundary. This inconsistency suggests that organic matter was not involved in concentrating uranium. Uranium was possibly concentrated from groundwater at the lithological boundaries between different redox levels during the period of high groundwater level.

Development of a new tool of laser scanner for borehole deformation to estimate stress orientation at shallow depth.

A new sensor tool for borehole deformation measurement using a laser displacement sensor has been developed for an estimation of crustal stress orientation at shallow depths. The new method for estimation using this tool is based on following principles: 1) A borehole drilled in an anisotropic stress field is elliptically deformed by creep due to viscous property of rock around a borehole. 2) The orientation of maximum horizontal compressive stress is determined from a minor axis of an ellipse fitted to a deformed shape of borehole cross section. One of the advantages of this method to estimate stress orientation is a remarkably lower cost than existing methods, such as stress release and/or hydraulic fracturing methods. Radial displacements of the borehole wall during creep deformation are measured with the laser displacement sensor rotating continuously around the borehole axis. A total resolution of 0.7 µm is achieved by stacking of several thousands raw data from the laser sensor. A field performance test confirms that the new tool can detect the creep deformation, about 10 µm increasing of the borehole radius in a measurement of half a day just after drilling.

What about Seismic Stratigraphic Unit as a formal unit.

Geologic map and lithology of the Early Jurassic accretionary complex of the Ashio Terrane in the Kamo district (western part of the Kambara Mountains), Niigata Prefecture, Southwest Japan.

Geologic mapping and stratigraphic division of the Jurassic accretionary complex in the Kamo district (western part of the Kambara Mountains) in Niigata Prefecture have been carried out under the Mapping Project of the Geological Survey of Japan. The Early Jurassic accretionary complex named the Semmi Complex mainly is composed of broken beds of sandstone and mudstone, containing basaltic rocks, limestone and chert. The Semmi Complex is divided to lower and upper units. The lower unit characteristically contains a large amount of sandstone, and the upper unit characteristically contains a large amount of basaltic rocks and chert. This report is important as a basic data in elucidating a tectonics of the accretionary complex in the Kambara Mountains, and corresponding with the other accretionary complexes in not only the Ashio Terrane but also the Mino-Tamba Terrane etc.