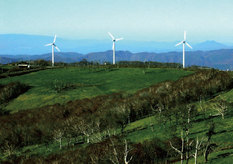 In the northern Kitakami Mountains, early Cretaceous plutonic masses occur sporadically in the Paleozoic to Mesozoic sediments. These plutonic masses form frequently on the gently-sloped mountains. Among the masses, the Hiraniwa mass crops out east of Kuzumaki Town, Iwate Prefecture. It is a mafic plutonic complex developing along the ridges trending north to south. A ski resort is located on the gently-sloped mountainside on the northern half of the Hiraniwa mass. The rounded top and mountainside on the southern half of the mass is used as pasture land. Therefore, the field condition is not suitable for a geologic survey. The photo is the westward view from the peak (Sodeyama:1209m ht.), located at the center of the mass’s southern half. The Hiraniwa mass is exposed on this side of the far left wind turbine.

The middle to upper Miocene diatom biostratigraphy has been established for the Nomura Formationexposed along the Otonashigawa River in the Tsugawa area, Niigata Prefecture, Japan. Neogene North Pacificdiatom zones NPD5B through NPD6A are recognized in the Nomura Formation. Sediment accumulation curvecontructed by diatom biochronology indicates that the sedimentation rate remarkably decreased to 0.3-0.15 metersper 1000 years around the base of the Nomura Formation. The last occurrence of Denticulopsis dimorpha var. areolata was recognized between the diatom biohorizons D59 (93 Ma) and D60 (9.2 Ma), and this event canpotentially serve as a stratigraphic marker to improve the resolution of late Miocene diatom biostratigraphy. Amass occurrence of Goniothecium rogersii has been found in the lower part of zone NPD 5D between the horizonsD56 and D58 where the species composes over 20 % of the total diatom assemblages. This event consists of fourpeaks of the abundance and persisted from 9.75Ma to 9.45Ma. The event has been recognized widely in severalstratigraphic sections of the northern part of the Neogene Niigata sedimentary basin.

14C ages for the ejecta from Kutcharo and Mashu calderas, eastern Hokkaido, Japan.

Eruption ages of the ejecta from Kutcharo and Mashu calderas were systematically determined by 14C dating. 16 charred samples were newly obtained from the Mashu and Nakashumbetsu Tephra Formations around the calderas and dated by AMS and β-counting methods. Examined units are Ma-d, Ma-e, Ma-f, Ma-j, Ma-k, Ma-l and Ml-a in the Mashu ejecta and 6 Nakashumbetsu tephra layers including Kutcharo Pumice Flow Deposit I (KpI), which is the youngest caldera-forming product from Kutcharo caldera. Results of the 14C dating range from 3,660±40 yBP to 36,080±1,300 yBP, and are consistent with the tephrostratigraphy. Calendar age for KpI was newly calculated at almost 40 ka and this age shows there was about 70,000 years recurrence interval between KpI and KpIV caldera-forming eruptions. Mashu caldera has appeared on the eastern part of Kutcharo caldera immediately after the KpI eruption, and calendar age for its main caldera-forming eruption were determined at ca. BC 5,600.

In northern Kitakami area, early Cretaceous plutonic masses are intruded into the Mesozoic sedimentary rocks. Those masses are aligned linearly almost on parallel three lines, trending NNW-SSE. In the “Rikuchuseki” district of the 1/50,000 scale geological map series, six early Cretaceous plutonic masses occur and the five masses of them are on the alignments mentioned above. The Hiraniwa mass is on the western alignment, the Tenjinmori, Oguni and Numabukuro masses on the central alignment, and the Kawaguchi mass on the eastern alignment. The masses on the western alignment consist mainly of gabbro, quartz diorite and granodiorite. They construct the zoned pluton of which central part is more felsic. Tha gabbroic rocks contain some amounts of K-feldspar and mafic rock-facies of the masses are rather monzonitic. The masses on the central alignment consist mainly of tonalite, associating with small amount of gabbro or diorite. The masses on the eastern alignment consist mainly of gabbro with small amount of granodiorite and characterized by their high magnetic susceptibility. In the northeastern margin of the district, the Takinosawa mass occurs. It is a part of the early Cretaceous large plutonic masses occurring along the sea shore of the Pasific Ocean. In the western and eastern parts of the district, several small gabbroic dikes and masses occur. They were weakly metamorphosed and considered to be intruded before the intrusion of the early Cretaceous plutonic masses. In the northwestern part of present district, intrusions of andesite dike and tuff breccia occur, though small in amount. K-Ar age of the hornblende in andesite dike is 15.2±0.9 Ma.

Age of felsic volcanism in the northeastern Izu Peninsula, Japan.

A stick-slip experiment was conducted using dry cylindrical samples saw-cut at an angle of 30° under confining pressures ranging from 30 MPa to 120 MPa. The samples used in the experiment were quartz-free basalt, gabbro, and peridotite. Loading on the rock samples was applied by a manual micro-discharge pump at a controlled rate of - 0.003 mm/s. Solenoids aligned circumferentially with the sample were used as sensors for detecting the magnetic field signal, while two pairs of electrodes, each consisting of two copper plates (30×30 mm), were used as sensors for detecting the electric field signal. The electrode pairs were aligned circumferentially with the cylindrical sample, one perpendicular to and the other parallel with the saw-cut surface. Variations in both the electric and magnetic fields were detected at the point of slippage during stick-slip motion in all samples, even in the quartz-free samples. However, no such signals were detected during stable sliding. In almost all of the gabbro samples, the amplitude of the electric field variation measured by the electrode pair aligned parallel to the fault was longer than thet obtained by the electrode pair orientated normal to the fault. This indicates that the gabbro samples are anisotropic. Moreover, the separation of electric charges between the faults and electric discharge is considered to occur simultaneously because the signals detected by the coils and the signals observed on the electrodes occurred almost simultaneously. Furthermore, the amplitude of the electric field variation measured by the electrode pairs was found to increase with the stress drop during stick-slip. Next, signals induced in each of the four copper electrodes were measured individually to confirm the anisotropy of the electric field variation. Results showed that the signals detected by the electrodes positioned parallel sides of the fault of the gabbro sample exhibited opposite polarities in the early stages, confirming anisotropy parallel and normal to the fault. For the basalt samples, although the electric and magnetic fields were too low to measure differences in the two directions for some samples, similar tendencies as those for the gabbro samples were observed.