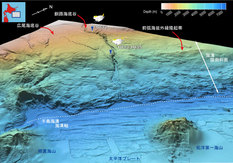 In the Kuril Trench off the southeast Hokkaido, the Pacific Plate is subducting obliquely beneath the trench axis (to the northwest, oblique subduction). The horst and graben structures of 200 m maximum height and seamounts of 3000 m maximum height prevail on the Pacific Plate. We can see a “Cookie bite structure”, where a seamount has been subducted at the trench axis. Many complicated topographic features comprise steep scarps on the trench landward slope, and the subduction tectonics may shape the slope morphology. The Kushiro Submarine Canyon cuts the trench landward slope several hundred meters and reaches at the trench axis. This cover figure shows multibeam bathymetric data collected with the research vessels of the Japan Agency for Marine-Earth Science and Technology (JAMSTEC) and the Ocean Research Institute, the University of Tokyo. See papers in this issue for details of the surveys using submersible “SHINKAI 6500” in the Kushiro Submarine Canyon Area for the first time. Dive sites and dive numbers are shown in the figures.

Radiolarians from rock samples recovered from the Kushiro submarine canyon.

A marine geological survey was conducted by YK07-14 cruise in the continental slope region off Kushiro, eastern Hokkaido to study sedimentation and tectonic evolution of the forearc-trench system. Rock samples were collected from the submarine outcrops along the Kushiro Canyon during the submariner Shinkai #1032, #1033 and #1035 dives operated by the cruise. From these samples radiolarians were extracted to determine the depositional ages of the sedimentary bodies of the forearc basin and the outer high. Samples taken from the outer high yielded radiolarians indicative of the Late Eocene-Early Oligocene, Early Miocene and early Middle Miocene ages. This result supports a seismic profile-based interpretation that the outer high consists of accretionary prism. Radiolarians from the forearc sediment samples suggest Pliocene or younger ages.

Diatoms of the mudstone samples collected from the canyon wall of the Kushiro Submarine Canyon, northern Japan.

Diatoms were examined from 12 mudstone samples collected by dive surveys of the submersible “Shinkai 6500” conducted in 2006 on the sidewall in the Kushiro Submarine Canyon, off Tokachi, Hokkaido. Diatom assemblages from the samples at the upper reaches are correlative with the lower part of zone NPD8 (early late Pliocene) to the lower part of zone NPD10 (early Pleistocene). At the lower reaches, early Pleistocene diatoms placed to upper zone NPD10 occur in semiconsolidated mudstone of slope sediments. On the other hand, the deformed mudstone samples collected at the outer high region contain poorly preserved diatoms correlated to zone NPD4Ba (middle Miocene), zone NPD2B (early Miocene) and the Roccela gelida Zone (latest Oligocene).

Dive report of “Shinkai 6500” at a middle part of upper reaches of the Kushiro Submarine Canyon off Tokachi Hokkaido Japan.

Dive survey by the submersible “Shinkai 6500” was conducted at a middle part of upper reaches (thalweg: water depth of 1814 m) of the Kushiro Submarine Canyon off Tokachi Hokkaido The canyon indents the outer shelf along a generally straight deeply entrenched course of 233 km in length upon the forearc basin and slope of the Kuril Trench in the Northwest Pacific The canyon side-wall at the dive point is stepped as three outcropped escarpment and two terrace The first escarpment is at the water depth of 1795-1770 m and is composed of alternating beds of very fine sandstone and siltstone The second and the last escarpments are at the water depth of 1580-1550 m and 1415-1370 m respectively The last escarpment represents minor step-shaped outcrop These are composed of massive siltstone Most rock samples are semiconsolidated and composed of diatom frustules and fine-grained terrigenous clastics The diatom and radiolarian ages suggest that the strata in the first the second and the last outcrops were deposited in the early Late Pliocene the late Late Pliocene the Early Pleistocene periods respectively.

Geologic structures in the west wall of the Kushiro Submarine Canyon revealed using the manned-submersible “SHINKAI 6500”.

Two “Shinkai 6500”, human occupied vehicle (HOV) dive surveys were performed on the sidewall in the Kushiro Submarine Canyon, off Tokachi, NW Pacific Ocean. These dives, 6K#1033 and 6K#1035, allowed observation of the geologic architecture of the Kuril trench. Samples from the canyon wall provide examples of deformation textures of fault-zone rocks and associated measured uniaxial compressive strengths of these rocks. The 6K#1033 and 6K#1035 dives surveyed in the middle part of the canyon. The dive area is divided into a highly deformed zone and non-deformed zone based on geological structures and stratal orientation. The highly deformed strata are cut and deformed by normal faults, thrusts, liquefaction and vein structures. The strata mostly strike NE-SW and dip south. The average value of the uniaxial compressive strengths in three specimens collected from highly deformed strata are 1.12-1.30 MPa. The horizontal strata unconformably overlie the highly deformed strata. At the base of the horizontal strata, a more than 1-m-thick conglomerate layer was observed. Average values of the uniaxial compressive strengths of two specimens collected during 6K#1032 dive (dive survey at upper horizontal layers of the canyon) were 0.46 MPa and 0.58 MPa. Given these observations, I suggest that cessation of deformation coincided with deposition of the conglomerate layer.