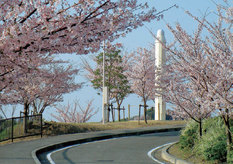 The station of the continuous GPS network of the Geological Survey of Japan, AIST, installed in the Matsuyama Sougou Park, Matsuyama City, Ehime Prefecture. GPS receiver and antenna are installed in the pillar on the right. The left thin pillar is a telegraph pole.

Physical properties of Cretaceous to Paleogene granitic rocks in Japan: Part 3. A case of the Ashio Belt (northern Kanto region).

Chemical compositions of the Miocene granitoids of the Okueyama, Hoei mine and Takakumayama plutons, Outer Zone of SW Japan.

Chemical compositions were studied by polarized XRF method on Miocene ilmenite-series granitoids and porphyries that belong to the Outer Zone of SW Japan from the following localities: 3 porphyries from the ring dike of the Okueyama area, 21 granitoids from the Okueyama pluton, 8 granitoids in the Hoei mine area, and 7 granites from the Takakumayama stock, all occurring as isolated bodies in the North Belt of the Shimanto Supergroup. They appear to be high-level granitoids and are compared with the ilmenite-series granitoids of Late Cretaceous Ryoke granitoids, which could be a deep level batholith in the Chubu district.
The Outer Zone granitoids are less than the Ryoke granitoids on the following components. Al2O3, Ba, CaO, Sr, A/CNK, P2O5, Zn and Cr; whereas the Outer Zone granitoids are richer than the Ryoke granitoids on the following components: Gax10000/A, K2O, Rb, Pb, Na2O, MgO, TiO2, V, Y, La, Ce, Th, U, Nb, Ta, Zr and Sn. These differences are considered to reflect different source rocks for these granitoids. The most distinct difference between high and low level granitoids is a sharp increasing with silica of Rb, Pb, Y, Th and U in the latest stage of the high level granitoids, which should be due to magmatic differentiation.
Zircon saturation temperatures are the highest in the ring dike, averaged as 859oC (70.3 % SiO2). The main granodiorite of the Okueyama pluton shows an average of 774oC (68.4 % SiO2), while the leucogranitic cap reveals 750oC (74.8 % SiO2). The Takakumayama granites give similar values as 738oC for the main phase (73.8 % SiO2) and 695oC (76.3 % SiO2) for the leucogranite. Traditional understanding of the S-type Takakumayama granites failed to be so, because of their A/CNK less than 1.1, low K2O contents and lack of restitic alumina-silicates.

Middle Miocene Neba Volcanic Field was newly defined in and around the Neba Village, Nagano Prefecture, Central Japan. Unlike large volcanic complexes in the Shitara district,south of the Neba district,volcanic rocks of a small scale are scattered in this district . However,we found the vent concentrated area, in which several vents associated with hydrothermal alteration, for example, Benten, Shirobuchi, Tajima, Kamabuchi,and Kuroji vents,are distributed within the area of 900 m x 700 m in size. The vent concentrated area as a whole forms a funnel-shaped structure. Benten Vent, trending N30°E, and 70m in length, was multiply formed: the vent breccia formation and successive basalt intrusion in the 1st stage, and the 2nd -the 3rd stage basalt intrusions with brecciation. Shirobuchi Vent, 100 m in length, has the trend perpendicular to that of Benten Vent. Tajima Vent, 70 m in length, was composed of a basalt intrusion cutting a vent breccia. Kamabuchi Vent,70 m in length,has a tear drop shape surrounding the basement Ryoke granite, and consists of a vent breccia in the outer margin,and a basalt intrusion in its core. The Ryoke granite as the host rocks near each vent is suffered partly from hydrothermal alteration,and partly develops the networks of dikelets. Fall back deposit near the bottom of the vent concentrated area was discovered at Shikizakura. Near vent deposit is identified: the lowermost facies at Anada and the lower facies at Nashinodaira. We reconstruct the cross section of the vent concentrated area with the 550 m altitude difference: the bottom is 600 m, and the top 1150 m a.s.l.

A New Continuous GPS Network of the Geological Survey of Japan, AIST.

We installed six new continuous GPS observation stations in Shikoku and Kii Peninsula at new groundwater observation sites from 2007 and 2008. In addition, we replaced old GPS stations with new ones so that all the GPS stations consist of the same type of Trimble GPS antenna and receiver. We also switched the GPS data analysis software to the Bernese GPS software. In the new data analysis system, we include GPS data from GEONET stations around the AIST stations. It is found that the new system provides the improvement of repeatability of GPS station displacement compared to the old one. The new system also enables to calculate strain time series using GPS daily position data, which is helpful for comparison with that observed by strainmeters installed at most of the AIST GPS stations.

Groundwater Research Group in GSJ has already published five Water Environmental Maps during the past six years, and we have received many comments and requests from users in this period. In addition, strengthening of cooperative framework with other groups and institutes is necessary to improve the map to our future vision. So, we needed to change and publish the edit guideline for the Water Environmental Maps. We determined this guideline, based mainly on contributed user comments and review of published hydrogeological maps of Japan and other countries. Consequently, we decided to construct three main hydrological items for new Water Environmental Maps, which contribute regional groundwater and geo-heat utilization.