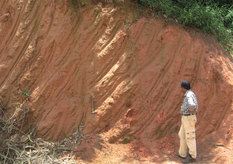 Weathered crust of granite in the Xaisomboun district, central Laos. Total REE contents of theweathered crust ranging from 885 to 3664 ppm are distinctly higher than those of the other surveyedareas (36 - 339 ppm) in Laos. Chondrite-normalized REE pattern indicates that the weathered crust isenriched in light REE relative to heavy REE. It is inferred that Most REE are adsorbed on kaolinite,which is an ion-exchangeable clay mineral, or contained in REE phosphate minerals such as monaziteand rhabdophane. The granite body seems to crop out locally although the parent rock of theweathered crust is not identified due to the intense weathering. Further geochemical and mineralogicalapproaches are required to elucidate the mineralization of ion-adsorption type REE mineralization inweathered granite.

Appraisal of the detectivity of hypothetical preslip of the Tonankai and Nankai Great Earthquakes using the integrated groundwater observatories of the Geological Survey of Japan, AIST.

The detectability of hypothetical preslip  of the great Tonanaki and Nankai earthquakes isinvestigated using the integrated groundwater observatories currently being established by the GeologicalSurvey of Japan, AIST. The detectability is calculated in terms of three characteristic parameters of thepreslip, i.e., time constant (slip duration), spatial extent, and direction of the preslip. If it is assumedthat the crustal deformation caused by the hypothetical preslip follows the elastic dislocation theory,and the noise level of the line strain observation of the network is 2×10-8, it is expected to detect preslipwith a moment magnitude of greater than 6.5 in the wide area of the network when the characteristictime constant (duration of preslip) and the spatial extent of preslip are about 1 day and 12 km×10 km,respectively. The detectability gets worse when either of the quantities is larger.

Enrichment of rare earth elements (REE) in granitic rocks and their weathered crusts in central and southern Laos.

This paper reports geochemical characteristics of granitic rocks and enrichment of rare earthelements (REE) in their weathered crusts in central and southern Laos in order to assess a REE resourcepotential of ion-adsorption type mineralization. The granitic rocks in the studied area consist mainlyof biotite ± hornblende granodiorite and biotite granite with low to moderate total REE contents withthe range of 36 - 339 ppm. The granitic rocks are enriched in light REE (LREE) with the depletion ofheavy REE (HREE) compared with HREE-enriched granites in southern China and southwest Japan.This difference in the enrichment of HREE is probably derived from poor differentiation of magma forgranite. Weathered crusts of the granitic rocks are generally well developed and rich in kaolin and illite.The weathered crusts can be divided into the A, B and C horizons from top to bottom and the B horizonis enriched in REE relative to the parent rocks whereas the A and C horizons are generally depleted orless enriched in REE. Weathered crusts with relatively high REE contents are locally identifi ed in theAttapu and Xaisomboun districts. Geochemical data and results of sequential leaching suggest that theenrichment of REE is attributed to the occurrence of ion-exchangeable clay minerals and REE phosphatesin the weathered crusts and that HREE are selectively adsorbed on the clay minerals than LREE byweathering.

Pollen data from Pleistocene sediments in the Fukasaku A-1 drill core, obtained from SaitamaCity, Japan, provide a basis on which a pollen biostratigraphy for subsurface geology of the centralKanto plain is constructed. In this study, 131 sediment samples were collected at ca. 2 m intervals fromthe Fukasaku A-1 core, which consists mainly of marine and fluvial sediments intercalated with twomajor Pleistocene marker tephra. The pollen assemblages from the Fukasaku A-1 core distinguish 28local pollen assemblage zones in informal nomenclature by a distinctive assemblage of taxa, indicatinglocal environmental conditions as a rudimentary biostratigraphic classifi cation. An abundance horizon of Cyclobalanopsis pollen and the uppermost documented occurrence of Quercus pollen are useful markerhorizons for Middle Pleistocene pollen biostratigraphic correlation in not only central and south Kantobut also in other sedimentary basins. On the other hand, the Fs-Pol-22 zone in the Fukasaku A-1 core iscurrently a barren interval in informal nomenclature, because of the signifi cantly low occurrence of treeand shrub pollen. Therefore, the pollen biostratigraphic character of this zone remains unresolved.

Constituent minerals and REE contents of the granite and Sn skarn ores from the Pin Yok mine, southern Thailand.

Tin skarn ores from the Pin Yok mine, southern Thailand, were studied for Sn and REEbearingminerals, because these elements are generally rich in "tin granites" and are supposed to beenriched in the surrounding rocks, especially of skarn-type ore deposits. The related granite of possiblyTriassic age contains no magnetite (i.e., ilmenite-series granites) but biotite and some secondarymuscovite, and is high in silica (75.0 % SiO2) and potassium (5.2% K2O) , with moderate contents of Sn (12 ppm) and REE+Y (232 ppm). Accessory REE+Y-bearing minerals observed under the microscope,are allanite, monazite, zircon and apatite in this granite.
The Sn skarn ores are composed of clinopyroxene (40~90 vol.%), grossular garnet (2~20 vol.%),stilpnomelane (2~20 vol.%), ilvaite (~5 vol.%), calcite (~10 vol.%), and quartz (~10 vol.%). Arsenic islocally abundant up to 4,490 ppm As, as possibly arsenopyrite. Tin contents of the skarn ores go up to7,070 ppm Sn. Cassiterite but no malayaite, in very fi ne grain size, has been identifi ed by microscopicobservation and qualitative analyses by EPMA. REE+Y contents are high in two samples of 327 ppm(77110903-6) and 260 ppm (77110309-5). Yet, no REE and Y-bearing minerals have been identified,except for some grains of allanite. Other skarn ores were found to be very low in REE+Y contents.