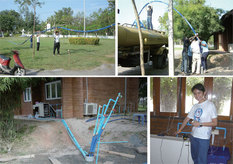 These pictures show the geothermal heat-pump system installed at an office of Department of Groundwater Resources in Kamphaengphet, Thailand in October, 2006 through our research project.

Top pictures: installation of double U-tubes into a heat exchange borehole. Left: extending the U-tubes. Right: inserting the U-tube into the borehole.

Down left: connection of U-tube and plastic pipes from the heat exchange borehole to a heat-pump. Down right: cool air from the fan coil in a room, which is cooled by the geothermal heat-pump system. It's cool!

In east Asia, where significant economical growth in this century is expected, intensive installation of geothermal heat pump (GHP) system may be important from both energy security and environmental protection aspects. Detailed underground temperature survey is essential for its promotion. Possibility of geothermal heat-pump application in tropical Asia is studied based on groundwater temperature data. Although generally geothermal heat-pump system may not have thermal merit for space cooling in tropics because subsurface temperature is generally higher than average atmospheric temperature, there may be some places in tropical regions where underground can be used as "cold heat-source". In order to confirm this possibility, groundwater temperature surveys were widely conducted in the Chao-Phraya plain, Thailand and Red-river plain, Vietnam to compare with atmospheric temperature data. As a result, regional variation of subsurface temperature at depths from 20 to 50 m of 3.4 K was observed in the whole Chao-Phraya plain while that of 2.0 K was observed in the Red-river plain. In some cities, subsurface temperature lower than monthly mean maximum atmospheric temperature for 5 K or more over four months was identified. Thus underground may be used as cold heat-source even in parts of tropical regions.

An experimental geothermal heat pump system for space cooling was installed in Kamphaengphet, Thailand in 2006 and used for 17 months. Temeprature changes in the subsurface heat exchange tube and its surroundings were monitored to evaluate subsurface thermal properties and short- and long-term effects of operation of the system. Subsurface temperuatre increase due to the system operation recovered in few days and no long-term effect was observed after a year of operation. Room and atmospheric temperatures and electricity consumprion of the system were also measured through the period. Temperatures and flow rates of primary and secondary fluids were measured as well. As a result, a system COP (coefficient of performance) of around 3 was obtained for its stable operation period. The results of temperature measurements and calculation of system performances is presented in this paper.