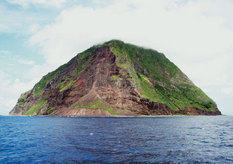 Kita-Iwo-To Island is a dessert island 1,200 km south of Tokyo. The photograph shows the southern cliff of the island. Many vertical dikes are exposed on the cliff, intruding horizontally stratified volcanic layers. The island is a non-active volcano formed in the middle Pleistocene. Landing on the island is not easy. However, there lived 200 to 300 persons at a maximum from the end of the 19th century to the middle of the 20th century.

This paper is intended to show the relationship between susceptibilities and degrees of serpentinization of serpentinized peridotite. The susceptibility, magnetization and bulk density of 79 serpentinized peridotites were measured. Moreover, rock magnetic analyses, i.e., acquisition of IRM, thermal demagnetization of composite IRM, thermomagnetic analysis, and low-temperature magnetometry, were applied to selected samples obtained from the Iwanai-dake ultramafic rock body in Hokkaido, Japan. Samples with similar peridotite contents were chosen to detect the serpentinization effects clearly. Results show that the magnetic carrier is mainly magnetite. Linear trends fell between 0.1 % and 0.4 % of the predicted volume of magnetite when observed susceptibilities were plotted against densities. The study results show that, if the magnetic carrier is magnetite, the relationship between susceptibility and density reveals the variation of serpentinization reactions. A significant spread of the data is apparent, but it remaines along each linear line of reactions. The volume of magnetite produced by serpentinization of other ultramafic rock bodies is presumed to be similar in samples for which the magnetic carrier is magnetite. The different susceptibility is inferred to result from the volume of water reaction when these rock bodies come from the same peridotite series. The results suggest that comparable amounts of reacting water affect the ultramafic bodies. The water reaction was found to be an important approach to solving many tectonic problems. Therefore, we recommend that serpentinite, which has the same basic reaction should be used to elucidate tectonic problems.

Outline of geology of Kita-Iwo-To Volcano in Volcano Islands, Japan.

Kita-Iwo-To Volcano is a dissected Quaternary stratovolcano with no fumarolic activities, belonging to the Izu-Bonin Arc. It is stratigraphically divided into older and younger volcanoes. The volcano consists wholly of subaerial lava flows, pyroclastics and volcaniclastics. Numerous thin and nearly vertical dikes crop out along the sea cliff and count up to 167. Most of them have radial patterns from the center of the island. All lavas and dikes sampled are basaltic rocks with phenocrysts of plagioclase, olivine and clinopyroxene except one andesite dike. Chemical compositions of basaltic rocks with 47.3-51.2 wt.% SiO2 and an andesite dike with 58.6 wt.% SiO2 belong to the low-K to medium-K series.

Eight multiple cores were collected from the central Okhotsk Sea for a measurement of concentrations of iron and manganese in the sea water just above sediments. Dissolved oxygen (DO), pH, and concentrations of iron and manganese were measured. Relatively high values of total dissolvable iron were recognized at some sites. There is a negative relationship between DO and total dissolvable iron concentration. This suggests that the interface between sea water and sediments were influenced by relatively reduced condition and iron ion was likely to be eluted from the sediments at these sites.