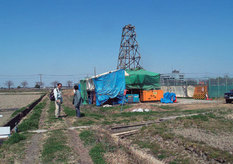 A 350-m-long sediment core, the GS-SB-1, was recovered at Shobu Town, central Kanto plain. This core was obtained to achieve a standard stratigraphy of the Lower to Upper Pleistocene subsurface geology in the central Kanto plain. This paper describes basic lithofacies, tephras and physical properties of the GS-SB-1. Physical properties including density, elastic wave velocity, spontaneous potential, and electric resistivity were measured. Sixty-nine facies units (unit 1 to unit 69 in descending order) were identified and their relation to physical properties was discussed. Thirty-nine tephras were found from GS-SB-1 core, and two of them correlate to the Ontake Pm-1 tephra (9.90-10.90 m in depth, ca 100 ka), and the Ks5 tephra (182.85-182.87 m in depth). Stratigraphic boundary between the Shimosa Group and the Kazusa Group is situated between 165 m and 184 m in depth. Nine marine deposits were identifi ed based on sedimentary facies and diatom assemblages reported by Naya et al. (2009).

Paleomagnetic and rock-magnetic measurements were performed on the GS-SB-1 core of 350.2 m long drilled at Shobu Town, Saitama Prefecture, central Kanto Plain, Japan. 493 and 16 samples were taken from the core for progressive alternating fi eld and thermal demagnetization experiments. Approximately 95 % of the samples have a stable remanent magnetization component. The core between 0 and 266.755 m in depth yielded a normal polarity, while between 276.9 and 350.2 m in depth was a reversed polarity. The reversal between 266.755 and 350.2 m in depth corresponds to the Matuyama-Brunhes polarity transition.