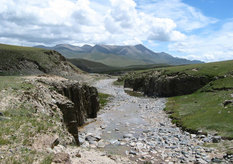 The mainstream of the Yellow River is 5,464 km long and the second largest river next to the Yangtze River (Changjiang) in China. Upstream region of the Yellow River is situated in Tibetan Plateau, Qinghai Province, where altitude is 4,000 m or higher. The river width is 5 to 20 km in Henan and Shandong Provinces. It often dried up during 1970's to 90's due to lack of water flow. It is very famous that the Yellow River water is muddy because of carrying a large amount of sediments. On the other hand, the river width at the upstream region is few meters and the water is clear. Tibetan nomads occasionally water domestic animals in this region where natural environment is gradurally deteriorated.

The paper aims to summarize the features of the Yellow River basin from viewpoints of physiographic conditions, climate, hydrography, economic development and water resources demand. The Yellow River basin is higher in the west and lower in the east, descending in three huge topographic steps. Most of the area belongs to the arid and semiarid continental monsoon climate zones and relatively dry. The main stream of the basin is 5,464 km long, and divided into upper, middle and lower reaches. The catchment area for upper reach is 38.6×104 km2, and that for middle reach is the same, but lower reach very small (2.24×104 km2). Both the upper and middle reaches are sections of rich water resources, but the middle reaches are also the main source for silt load. Economic development is presently unbalanced between upper-middle and middle-lower reaches. Based on these datasets, water demand for 2010 and 2020 is predicted.

Regional geology and hydrogeology of the Yellow River basin.

The paper reviews regional geology in the Yellow River basin from viewpoints of stratigraphy and structure. Based on the geologic features, water-bearing formations are classified into following 5 types: Loose sediment type pore water-bearing formation, Clastic rock type fissurepore water bearing formation, Carbonate rock type formation, Magmatic and metamorphic rock type formation, and Frozen layer type formation. Groundwater in the Yellow river basin is classifi ed into 12 systems on the basis of hydrogeological conditions and characteristics of recharge, runoff and discharge of groundwater. Each system is described in detail, and distribution map for classifi ed systems are shown in the map. Three cross sections are illustrated as representative examples for upper, middle and lower reaches respectively.

Changes of frozen soil in the Yellow River source region and their impact on water resources.

The Yellow River source region is located on the boundary between permafrost and nonpermafrost areas, and the former can be subdivided into areas underlying seasonally frozen soil and middle-latitude high-elevation type permafrost. The development and preservation of permafrost are the key factors to maintain ecological balance. The rise of air temperature is the most direct cause for regression of frozen soil. Since the 1950s, there has been an obvious rising trend of air temperature in the source region, and reached 0.28°C per decade during the last 20 years. The shrinkage of the permafrost have occurred on the borders of permafrost area, and followed by remarkable drop of groundwater level and decrease of runoff volume. Impacts of frozen soil changes on regional hydrology are not only related to change of groundwater environment but also to ecological changes in meadow plants, plague of fi eld mice and changes in runoff of the Yellow River.

Permafrost and hydrology in the source area of the Yellow River.

Frozen ground was investigated in 2003-2006 to evaluate the present-day distribution and ongoing degradation of permafrost in the source area of the Yellow River, located at the northeastern margin of the Tibetan Plateau. The presence of permafrost was examined by seismic, electrical and/ or thermal soundings at 18 sites between 3,250 m and 4,800 m a.s.l. Then, permafrost distribution fi tted to the sounding results was mapped by means of GIS. Temporal variations in ground thermal and hydrological regimes were also investigated for two years at Madoi observatory (4,273 m a.s.l.), by automatic and manual observations of air and ground (0-8 m deep) temperatures, precipitation, snow depth, near-surface soil moisture and groundwater level. In addition, numerical simulation of the ground thermal profiles was performed to discuss the degree of permafrost degradation under the observed atmospheric warming.
High P-wave velocities (>2 km/s) and relatively high DC resistivities (650-1,100 Ωm) below a thin uppermost layer show that permafrost 10-30 m in thickness occurs above 4300 m a.s.l. In contrast, low P-wave velocities (<1 km/s) throughout the sediments indicate that permafrost is absent below 4,000 m a.s.l. On widespread alluvial plains between 4,200 m and 4,300 m a.s.l., permafrost is lacking or significantly degraded. Negative values of the mean annual ground surface temperature (MAST) also indicate widespread permafrost only above 4,300 m a.s.l. under the present climatic condition. The seasonal frost penetration reachs a maximum depth of 2.6 m at the observatory. Intermittent and very shallow snow cover favor frost penetration. The ground between 4 m and 8 m in depth was kept at slightly positive temperatures (0-4 °C) throughout two years, although the presence of permafrost at this site was suggested by a few reports in the 1980s. Assuming that the inter-annual variation in MAST follows that in the mean annual air temperature, permafrost is estimated to have signifi cantly thawed on the alluvial plains at 4,200-4,300 m a.s.l. during the last half-century. The numerical simulation suggests that thin (<15 m) permafrost can signifi cantly degrade within this time scale. The resulting degradation of the permafrost is assumed to have extended 3,000 km2 on the alluvial plains in the source area.

Groundwater balance and circulation in key areas of the Yellow River basin.

Groundwater level lowering in the North China Plain (NCP) has been developing during past several decades by overuse in populated cities and industrial districts as well as by irrigation. To interpret groundwater level lowering in terms of aquifer-bearing beds having relatively high porosity, contour maps and cross sections of water level lowering based on monitoring data are compared with subsurface Quaternary geologic map. The comparison revealed that the extents of productive shallow and deep aquifers are generally restricted in specifi c regions where sand and gravel occur in lenticular form. The groundwater resources are regarded as fossil resource because groundwater of deep aquifer is dated as older than 10,000 years BP. Therefore, if overproduction of groundwater continues at the same rate as at present, it should result in depletion or severe lowering of water level and induce ground subsidence and water quality deterioration. To overcome the problems, effective use of irrigation and recycling of used water from industrial and domestic uses by water purifi cation are essential.

Geological model of the Yellow River basin for the long-term groundwater simulation.

To simulate long-term groundwater flow within the whole catchment areas of the Yellow River basin, a hydrogeological model is formulated. This model includes the impermeable basement defi ned by the brittle-plastic transition, formulation of the depth-dependency of permeability of the upper crust, major fault distribution, and an isopach map of the Quaternary System. The Yellow River basin is characterized by five stepwise altitude areas; the Tibet Plateau, the northeastern slope of the Tibet Plateau, the northwestern Ordos Plateau, the southeastern slope of the Ordos Plateau and the North China Basin. The structure was formed by tectonics, particularly by the rigid Ordos Micro-Plate block. When adequate permeability and local groundwater consumptions are assumed, the results of the simulation are well consistent with the records of the dramatic decline of the water table since 1960s, indicating the excess groundwater consumptions as the major factor for the decline. This simulator enables to forecast the future shortage of groundwater in the Yellow River basin.

A large-scale full-3D water circulation model, which covered with the whole Yellow River Basin (YRB) from source to mouth, was developed to predict the available groundwater resource next 20 years. Reproducibility of YRB model had been verifi ed by using the measured groundwater levels or the existing literature information. Future prediction was carried out based on the scenarios required from 2010’s and 2020’s water demand and supply data provided by China Geological Survey (CGS).