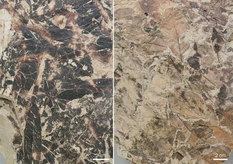 Plant megafossils from the Lower Miocene of the Joban area, Northeast Japan.

The upper Lower Miocene Nakayama Formation of the Joban area abundantly yields plant megafossils deposited during the Mid-Neogene Climatic Optimum. The photographs show the occurrence of plant megafossils in one of these localities in a floodplain deposit. Plant megafossils from the muddy facies (left) were generally preserved in a flat-lying manner, and composed of a few dominant species that represent a local riparian community. Whereas, those from the sandy facies (right), often preserved in a curled or folded condition, included various species that had been accumulated from the lowland vegetation around the site of deposition.

Recent investigations in Kamchatka and Sakhalin in the active transitional zone from the Pacific Ocean to the Asian Continent have led to a new generation of Cenozoic stratigraphic schemes. Several regional stages recording distinctive phases of regional development and different biotic and abiotic events have been recognized. The following regional stages were distinguished in Kamchatka: the Yuzhno-Il’ pinskii (Paleocene), Kylanskii, Kilakirnunskii, Gailkhavilanskii (Eocene), and the Aluginskii (Oligocene). All of them contain planktonic and benthic foraminifers, mollusks, macroflora, and diatoms. Therefore, standard stages and zones can be outlined there. The Paleocene and Eocene zones were established by means of planktonic foraminifers, and the Oligocene zones by diatoms. In addition, provincial zones based on benthic assemblages were recognized, which can be used for regional correlations. Recently some new data on magnetostratigraphy and biomarkers became available. The regional stages were also characterized in terms of lithology with outlining sedimentary cycles. In the warm Eocene conditions, carbonate plankton, warm-water mollusks, and paratropical flora were spread over the entire North Pacific, whereas a cold-water (boreal type) biota was formed during the Oligocene and the warmwater associations migrated southward. So, the main biotic differentiation took place during Eocene to Oligocene.

Asymmetrical condition of the Bogor Basin (West Jawa, Indonesia) during the Middle-Miocene to Pliocene based on taphonomic study of shellbed and its sequence architecture.

Examples of lithology, fossils and taphonomic features of shellbeds and intervening less-fossiliferous intervals are presented from two Middle Miocene to Pliocene successions of the Bogor Basin in West Jawa, Indonesia: the Nyalindung Formation in the Sukabumi area which was deposited in the western part of the basin and the Kaliwangu Formation in the Sumedang area, which is the eastern extent of sediments in the basin. As for Miocene to Pliocene 6th order depositional sequences, the two successions contain a variety of shellbeds which are often associated with surfaces or intervals that are characterized by sedimentary condensation, omission or erosion (e.g., sequence boundaries, ravinement surfaces, downlap surfaces and condensed sections). Stratigraphic patterns in the shellbeds tend to be similar and repetitive within a basin with respect to position and age. For example, shellbeds formed in the context of toplap are common only in the Nyalindung Formation, and are characterized by thicker units of trangressive systems tracts (TST) and thin units of highstand systems tracts (HST). In contrast, sedimentary cycles from the eastern part of the basin in the Kaliwangu Formation can be recognized as formed under conditions of marine backlap and downlap, where the TST units are thin but the HST units are thicker. Such contrasting cycle architectures are interpreted to reflect an asymmetrical shelf depositional setting between the western and eastern edges of the Bogor Basin since Miocene to Pliocene time.

The Middle Miocene Climatic Optimum (MMCO) at ~ 16 Ma was the warmest interval during the Neogene. The peak of the MMCO in the North Pacific is marked by the appearance of the bivalve genus Kaneharaia (Bivalvia, Dosiniinae) in the high-latitude regions of Kamchatka and Alaska (55 - 65°N). Specimens of Kaneharaia sp. were collected from two early middle Miocene high-latitude localities in the North Pacific - the Sea urchin Horizon of northwestern Kamchatka and the Narrow Cape Formation of Alaska. Middle Miocene Kaneharaia specimens were incrementally sampled for oxygen and carbon stable isotope records of seasonality. Results were compared with stable isotope profiles constructed for two Recent species of Dosinia from subtropical waters. Assuming a constant seawater δ18O of -1.5 ‰ (Lear et al., 2000), including latitudinal correction (Zachos et al., 1994), oxygen isotope data yield mean annual temperatures of 19.3°C and 23.5°C and a mean annual range of temperatures of 19.8°C and 11.0°C for Alaska and Kamchatka, respectively. These temperature ranges are comparable to those of modern subtropical (40°N) mixed-layer waters, which implies significant warming episodes at high North Pacific latitudes during the peak of the MMCO. The variations in isotopic composition and inferred temperature ranges, as well as patterns of stratigraphic occurrence, imply that warm surface waters of the MMCO were not persistently present in high North Pacific latitudes, as they were at low latitudes. Instead, relatively short-term incursions of warm surface waters from the subtropical western Pacific episodically introduced warm-water mollusks into this generally cooler region.

Through the scientific results of IGCP Project 355, which studied Pacific gateways, the timing of onset or closure of each gateway has been defined. Some geological and paleontological events recognized in local areas took place as a result of gateway events. For instance, the appearance of siliceous biomarkers during the earliest Miocene in Sakhalin, northwestern Pacific, is coeval with the opening of Drake Passage during the earliest Miocene (23 Ma), and the invasion event of Hataiarca, an extinct Miocene bivalve, at 16.4 Ma in the Japanese Islands, is coeval with the closure of the Indonesian seaway. This closure indicates the first distinct appearance of the paleo-Kuroshio Current around the Philippine Islands. Japanese Paleogene faunas have been compiled recently from the biochronological aspect, and Miocene molluscan faunas are now divided into the subtropical Akeyo-Kunugidaira fauna (20-16.4 Ma), the tropical and/or subtropical Yatsuo-Kadonosawa fauna (16.4-15.3 Ma), the subtropical and/or warm temperate Moniwa fauna (15.3-15 Ma), the warm-temperate Older Shiobara-Yama fauna (15-11 Ma) and the mildtemperate and/or cool-temperate Younger Shiobara-Yama fauna (11-5.3 Ma). These faunas can be considered as responses to stepwise cooling stages from tropical to cool-temperate realms, respectively. Opening and closure of the Bering Strait during the Neogene was recently precisely redefined using diatom biochronology and fossil records of the bivalve Astarte. However, sea-water cooling is obvious after 6 Ma in high-latitude areas and tends to remain distinct until 2.5 Ma. The modern sub-arctic cold water-mass may have first appeared around 1 Ma as indicated by the first fossil record of the Chlamys islandica group in Hokkaido, Japan.
It is important to consider that some kinds of geological events recognized in a local and/or regional area might have taken place in response to global events. In addition, the precise age determination of related geological events is very important for the consideration of the cause and effect of events.

Paleogene molluscan biogeography of the northwestern Pacific: Relationship between the formation of the Central Japan Province and the opening of the Shikoku Basin.

Eocene ostracode assemblages with Robertsonites from Hokkaido and their implications for the paleobiogeography of Northwestern Pacific.

We report on Eocene ostracode species from Hokkaido, northern Japan for the first time and discuss their paleobiogeographic implications. Five species were found in the lower part of the Sankebetsu Formation in the Haboro area, and the Akabira and Ashibetsu Formations in the Yubari area, central Hokkaido. The ostracode assemblages are characterized by Robertsonites, a circumpolar Arctic genus of the modern fauna. This finding marks the southernmost occurrence of the Eocene record of the genus, as well as the oldest occurrence. As the characteristics of the Eocene Hokkaido fauna are similar to those of the modern-day fauna in the Seto Inland Sea, a contrast in species composition is observed between the Seto Inland Sea and Kyushu. This contrast is attributable to differences in sea temperature. Five species are described, including Robertsonites ashibetsuensis sp. nov.

Fossilized rock-boring bivalves and associated borings in the Miocene Sankebetsu Formation in northern Hokkaido, Japan, are useful for reconstructing paleoenvironmental changes. The sediments are typical of shallow-marine facies in Hokkaido, and are rich in rock-boring bivalve traces. The Miocene host formation (Sankebetsu Formation, 23-19 Ma) unconformably overlies an earlier Eocene formation (Sakasagawa Formation). The inferred paleoenvironmental changes associated with deposition of the Miocene Sankebetsu Formation at the study locality started with development of a wave-cut bench of stiff mud or soft rock that was extensively bored by the rock-boring bivalve Platyodon nipponica to form unnamed ichnofossils. The bench was subsequently covered by sediments associated with a transgression and were gradually lithified. A later regression lead to the development of new bench of hard rock that was bored by the rock-boring bivalve Penitella kotakae to form the boring ichnofossil identified as Gastrochaenolites turbinatus. Finally, the new bench was covered by sediments during a major transgression, forming a shoreface environment characterized by storm-generated shell beds. The analysis of bioerosion on marine rocky surfaces is a useful tool for interpreting geological episodes such as relative oscillations of sea level, erosion/sedimentation rates, and the intensity of physical disturbance.

Five Early Miocene plant megafossil assemblages from two separate sequences in the Joban and Soma areas on the Pacific side of Northeast Japan, which are interpreted to have accumulated from vegetation in near-sea coastal lowland, are analyzed to discuss the temporal change of floral composition and causal change in terrestrial climate. The Mixed Northern Hardwood forest characterized by various species of deciduous woody dicotyledons and deciduous and evergreen conifers in Stage I (ca. 23.4 Ma) shifted gradually to a Mixed Broad-leaved deciduous forest (Stage II: ca. 21 Ma), a Mixed Broad-leaved Evergreen and Deciduous forest (Stage III: ca. 20 Ma) and a Notophyllous Broad-leaved Evergreen forest (Stages IV and V: ca. 16-17 Ma) with an appearance and subsequent increase in evergreen and deciduous species that favors warmer climatic conditions, and a decrease of taxa which inhabited cooler climates. These changes reflect an increase in mean annual temperature in the first half of the period and a decrease in mean annual range of temperature in the latter half, which were caused by mitigation of winter coldness. A quantitative analysis of mean annual temperature based on the leaf margin analysis also revealed a clear trend of increasing temperature. An abrupt change in temperature observed at the transition from Stages I to III, and warm climate during Stages IV to V can be correlated with the periods influenced by subtropical to tropical shallow-marine climate. A comparison between terrestrial and shallow-marine climates in the Joban and Soma areas probably indicates a synchronous response to climate change occurred during the Early Miocene.

Numerical age of the planktonic foraminiferal zonal boundary between N.15 and N.16 in the mid-latitude northwest Pacific region.

The first occurrence of the planktonic foraminiferal species Neogloboquadrina acostaensis, which defines the zonal boundary between zones N.15 and N.16, was precisely determined just above the KT-1 Tuff in the lower part of the Kubota Formation in the Tanagura area, Northeast Japan. According to radiometric ages of the KT-1 Tuff, this biohorizon is estimated at 10.6 Ma. Compiling deep-sea drilling data demonstrates that the biohorizon as synchronous at least in the mid-latitudes.

Chronological data for the Middle Miocene to Pliocene sequence around the southwestern Sendai Plain, with special reference to the uplift history of the Ou Backbone Range.

Middle Miocene to Pliocene chronostratigraphic data were obtained from three sections on the southwestern margin of the Sendai Plain, northeast Japan. In this tectonically active area, we newly infer the numerical age of the coastal sedimentary sequence on the basis of 27 fission track ages in combination with planktonic foraminiferal and diatom analyses. The Hatatate Formation cropping out along the Natori-gawa Section approximately ranges from 13 Ma to 11.5 Ma in age. The Tsunaki Formation ranges from 10 Ma to 8.3 Ma, and the basal part of the Nashino Formation is assigned to 6.4 Ma. Four major unconformities were recognized in the Middle Miocene to Pliocene sequence in the study area from a compilation of chronological data: ca. 9 Ma, 6.4Ma, latest Miocene, and 3.5Ma, respectively. The oldest unconformity was newly identified in this study. Formative timings of these unconformities correlate well with the uplift history of the Ou Backbone range reconstructed by Nakajima et al. (2006). These data provide a restriction to reconstruct the uplift history of the Northeast Honshu Arc.