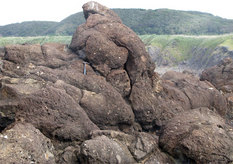 This pillow lava was emplaced in shallow water during the Late Eocene time. Pillow lobes hang down and are cracked in longitudinal and transverse directions. The pillow surfaces have lost the details of the surface textures by weathering but sparse radial cracks are visible on cross sections. Some lobes have ropy surfaces characteristics of pahoehoe lava, and spatter and aa lava flows are distributed around Kabuki Iwa. The pillow lava associated with the spatter and aa lava demonstrates that Kabuki Iwa was in a transitional environment between land and shallow water.

Reinvestigation of the historical eruption and fumarolic activity records at Ontake Volcano, central Japan.
-Misunderstanding reports about the 774 AD and 1892 AD eruptions-

Magnetite-series Paleogene granitoids of Mo-mineralized region of eastern Shimane Prefecture were studied chemically and compared with ilmenite-series granitoids of the Ryoke belt of the Chubu district. The eastern Shimane granitoids are divided into coarse-grained granodiorite and granite of batholithic bodies, and fine-grained granitoids occurring close to the roof-pendant. The fine-grained ones, varying in composition from quartz diorite to aplite are further subdivided into: Zakka and Kawai types, Rengeji type, leucogranites in the ore horizon, Yamasa type, Shimokuno type, and Ouchidani type. These granitoids are poor in A/CNK, Ga, Ga x 10000/A, K2O, Rb, Ba, Pb, CaO, Fe2O3, Zn, Y, La and Ce, and rich in Na2O, MgO, V and U, as compared with those of the Ryoke granitoids in the Chubu district. The chemical data indicate that the eastern Shimane granitoids are originated in source rocks with poor continental components, such as Al2O3, K2O, REE, and organic carbon. Some gabbroids which are high in Sr content and Sr/Y ratio may have been derived from slab-melting. Rengeji Older Granite is potassic being K2O>Na2O, and rich in La, Ce, Y, Nb, Th, U; thus continental in the source rocks.
There occur small metamorphic bodies containing locally spinel and andalusite along the northwestern margin of the Rengeji Granodiorite. Kanenari hornfels is considered mainly psammitic with peraluminous layers. Togiishiyama hornfels has high A/CNK ratio but the K2O contents are normal as to the SiO2 contents. This rock contains rock-forming mineral of magnetite and has unusually high amounts of S, Cu, Pb, Zn and MnO. Therefore, the original rocks are considered intermediate to felsic tuffaceous sediments containing very little organic carbon. Mo-contents are high as 2.0 to 6.3 ppm Mo in average of the granitoids that host major molybdenite deposits, such as Kawai mingled rocks (Daito mine), Rengejileucogranites (Seikyu and Higashiyama mines) and Yamasa leucogranite (Yamasa mine). Therefore, trace amounts of Mo of fresh granitoids can be used as an exploration indicator.

Changes of geochemical characteristics of water in hydrological cycle in mountainous region−an example from the Kanamaru area, Niigata and Yamagata Prefectures, northeastern Japan.

In order to clarify the change in the geochemical characteristics of water during hydrological cycle in mountainous and forested region, we studied chemical compositions of precipitation, streamwater, spring water and groundwater in the Kanamaru area, northeastern Japan, since 2002 to 2005. The groundwater was taken from 50 meters deep nine wells in a foot part of mountainous region where the Cretaceous granites and overlying Miocene sedimentary rocks are distributed. Each well was drilled through both the sedimentary rocks and granitic basement. The precipitation, streamwater and spring water were collected from the area surrounding the wells. The precipitation, streamwater and spring water show seasonal change in electric conductivity (EC) and concentrations of Cl- and Na+; they are higher in the winter season and lower in the summer and snow-melt seasons. The geochemistry of groundwater is characterized by increase of pH, EC and concentrations of Ca2+ and HCO3- and decrease of dissolved oxygen and Eh with increasing depth.