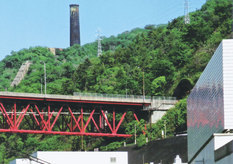 Giant Chimney of the Hitachi mine.

Hitachi mine, located at the southernmost edge of the famed Abukuma metamorphic terrain, was a large copper producer from the Besshi-type chalcopyrite-pyrite deposits. Sulfurous acid gases exhausted during the smelting caused air-pollution to the local inhabitants, and the famed giant chimney (156 m high) was constructed in1914 on a mountainous hill with 300 m elevation above sea level. It is now broken into 1/3 of the height by storm. Electric section of the mine became the gigantic Hitachi Co. with many other Hitachi-group subsidiaries.

We examined time and spatial distributions of sedimentary facies surrounding the spit sediments in the bay-mouth portion of the Paleo-Okutokyo Bay by using sedimentary facies and radiocarbon dates obtained from two sediment cores (MZ and SZ cores) from the eastern margin of the Tokyo Lowland. Latest Pleistocene to Holocene incised-valley fills (the Chuseki-so) which unconformably overlie Middle to Late Pleistocene deposits (Shimosa Group) consist of braided river, meandering river, estuary, spit and delta sediments in MZ core in ascending order. The Chuseki-so consists of delta sediments in SZ core. MZ and SZ cores yields radiocarbon dates ranging from 13150 to 3160 cal BP and from 3930 to 730 cal BP, respectively. Sand shoal sediments constituting part of the spit sediments in MZ core forms a sand body which elongates northeastward from the spit sediments. And this sand body seems to have deposited in a bay-mouth channel which existed behind the spit between 4500 and 3500 cal BP.

Chemical compositions of the late Cretaceous granitoids across the central part of the Abukuma Highland, Japan - Revisited.

Variance of magnetic properties of the marginal part of Miocene volcanic conduits in northwest of Ehime Prefecture, Shikoku District, Japan.

Kogajajima, composed of hornblende andesite and dacite lavas, is a small volcanic island 0.5 by 1 km in diameter and is at the summit of a seamount 5 by 10 km in diameter and more than 800 m high. The eastern half of the island is hydrothermally altered. Several active fumalores and hot springs were recognized in our survey in 2005 and 2006. In addition to the young K-Ar age suggesting late Pleistocene in age, the fumarolic activities implies that the volcano is still active in recent years.