Special Issue: The basic study on the assessment of influence by heat and hydrothermal water for geological disposal of nuclear waste (Part 2) 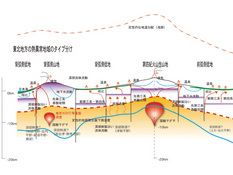 The project is an examination of evaluation methods for the effects of heat and hydrothermal water on the surroundings of the geological repository. Tohoku was selected as the model district for this case study. The distribution maps of topography, geology, seismic hypocenters, Curie-point depth, subsurface isotherms, hot springs, heat flow, seismic velocity and so on were collected, and summarized as input into the database for 2D and 3D visualization. The characterization on wide areas including high-temperature anomaly regions of the Tohoku district were examined based on the interpretation of geological and geophysical data sets. The conceptual model for a representative cross section was drawn as integration of whole features in the Tohoku district.

Summary of the basic study on the assessment of influence by heat and hydrothermal water for geological disposal of nuclear waste (Part 2).

The report is intended to open the result of three-year contract research to the public as the final report. This project was funded by the Nuclear Waste Management Organization of Japan (NUMO). The preliminary result and background of the project was reported as the special issue of Bull. Geol. Surv. Japan in 2004. Therefore, this report was named as part 2. The purpose of the study is to comprehend earth scientific characteristics and genetic origins of high-temperature anomaly areas, and to examine the evaluation methods for the influence of heat and hydrothermal water on surroundings by geological repository at the stages of extraction of Preliminary Investigation Areas (PIAs) and of its following site-specific surveys. The characterization on wide areas including high-temperature anomaly regions of the Tohoku and Chugoku/Shikoku districts are examined, and the conceptual models for representative cross sections of both districts are drawn. The outline of investigation results are described for every theme as follows.

Integration of geological and geophysical data for extraction of subsurface thermal and hydrothermal anomaly areas -Examples in Tohoku and Chugoku/Shikoku districts, Japan.

In order to clarify the situation and origin of subsurface high temperature anomaly in nonvolcanic area, the middle northern part and northern part of Tohoku district, and Chugoku/Shikoku district are selected as the model fields for this case study. The distribution maps of topography, geology, subsurface isotherms, Curie-point isothermal depth, seismic hypocenter, electric resistivity, and P-wave velocity were collected and summarized as input data to the database for 2-D and 3-D visualization. After digitizing, mutual correlations among various data are investigated. Major results are as follows. In deeper part, subsurface temperatures are generally higher at back-arc region than at fore-arc region, and also those of mountain regions are relatively higher than of plain regions for both back-arc and fore-arc regions respectively. These deep thermal features are correlated with thermal gradient, gravity basement depths, Curie-point isotherm depths and P-wave velocity. In shallow part, subsurface temperatures are relatively high in Quaternary volcanic regions by the high-level heat sources, and also somewhat high in plain regions by cap rock playing the shield for underlying hydrothermal convection. These shallow thermal features are correlated with thermal gradient, hot spring, electric resistivity and P-wave velocity.

The characterization on wide areas including high-temperature anomaly regions of the Tohoku and Chugoku/Shikoku districts are examined based on the geological and geophysical data sets. From the viewpoint of topographic and geologic features, following 5 type areas are identified in each district: fore arc plain, fore arc mountain, Quaternary volcanic terrain, back arc plain and back arc mountain. The conceptual models for representative cross sections of both districts are drawn. The thermal and hydrothermal features of each type area are described in detail based on the overlaid various data sets.

Numerical simulations of regional-scale groundwater flow and heat transport using a 2-D model are conducted along the E-W Tohoku region which covers 120 km length and 8.7 km depth. In the numerical simulations, geological and topographical data are incorporated to construct a precise numerical model. A multi-component, multi-phase geothermal reservoir simulator is used for the numerical simulations. As results of sensitivity analysis, it is necessary to assign inhomogeneous heat sources (heat flows) at the bottom of the model to qualitatively reproduce high-temperature anomalies right beneath the mountain areas. It is also revealed that deep-seated hot water around the temperature of 50 oC can be found even right beneath the plains due to heat and groundwater convection and advection driven by topographical effects, although volcanic high-temperature heat sources are not existed under the plains.

Study on the analytical methods for extraction of heat anomalies and their characterization based on distribution of heat discharge from hot springs.

Hot spring heat discharge at the areas of Aomori, Chugoku and Shikoku districts is investigated based on the data including the information of hot spring production depths. The relationships among the temperatures, amounts of hot water/heat discharge and their depths are different at the areas. The amounts of water/heat discharge from hot springs are generally related to formation permeability on the scale of wide area. To have a better understanding of subsurface condition, it is preferable for full specifications of hot springs to be complete regarding temperature, production depths, amount of water discharge, condition and behavior.

Various alteration environments studied through making a rock-alteration database for geothermal wells, and modeling of six case-study areas in Japan.

(1) The alteration data (the depth-mineral distributions) for each of the 271 wells in the reports of 14 and 21 areas in Kyushu and Honshu, respectively, have been transferred to tables using spreadsheet software (Microsoft Excel) for the database construction. However, it will take years to make the database open to public due to the difficulty of data integration, because, in the Geothermal Development Promotion Survey, the methods and configurations of obtaining and presenting the alteration mineral data have been rather varied area to area (also the data from seventeen areas in Hokkaido and some other areas have not been edited yet). In this article, the differences of the alterations among the areas have been discussed preliminarily based on summaries in tables for wells, and in regional maps for the areas using sixteen mineral species strongly indicative for characteristics of the alteration environments.
(2) For conceptual modeling of the alteration environments, two high-temperature areas, Asosan- Seibu (Kumamoto Pref.) and Hachijjojima (Tokyo Pref.) areas, and four low-temperature areas, Hishikari (Kagoshima Pref.), Hongu (Wakayama Pref.), Otaki (Nagano Pref.) and Mogami-Akakura (Yamagata Pref.) areas have been studied. For each area, detailed typical columnar figures, a parallel columnar figure, and columnar presentation on a map of the well data (temperature, geology, and alteration) have been produced using well-logging data processing programs in Digital Geoscience Map, GT-3 (Geological Survey of Japan, 2007). The results of the conceptual modeling show that various alteration zones have been developed underground even at the low-temperature areas, because of various causes including characteristics and distributions of heat sources and hydrothermal systems, inhomogeneous fluid flow structures due to distributions of topography, fracture systems and lithology, and chemical differentiation due to liquid-gas separation, and others. Rock alteration survey could be one of the powerful methods for understanding subsurface environments of nonvolcanic areas.
The above study has been conducted as a part of the Study on Assessment Methods for Thermal and Hydrothermal Effects (FY 2003-2005) concerning geologic storage of nuclear wastes (HLW). In surveying potential storage areas, rock alteration survey is important for the purpose of understanding and assessing the past-present-future thermal and hydrothermal environments, and the above results could be effectively utilized as one of the basic information. Also, information on rock alterations is very important for various subjects in geoscience and engineering fields, i.e. resources development, environmental protection, hazard mitigation, underground space utilization, and others. Hence, future construction of electronic database integrating not only hydrothermal alterations, but also thermal, diagenetic, weathering, and other alterations, as one of the fundamental earth-science information, and its easy, wide and advanced applications will be expected.

The assessment of influence by heat and hydrothermal water using electron spin resonance.

In order to evaluate effects of geothermal anomalies at high-level radioactive wastes disposal sites, previous studies applying electron spin resonance (ESR) mesurement to various samples and objectives have been reviewed, such as low-temperature hydrothermal water, detailed analysis of paleotemperature, and spatial distribution of thermal effects. ESR measures unpaired electrons trapped at defects in mineral crystals, therefore crystallization can be regarded as initial condition as well as cooling. Some reports of ESR measurement on sinters and stalactite, which had been precipitated from hot springs and cold groundwater respectively, have been found. A few kinds of ESR signals show enhancement under heating condition to natural hydrothermal temperature, and this property had used to detailed analysis of heating temperature of archeological implements. In case that fracture zones provide paths to hydrothermal fluid, calculated ESR ages of altered country rocks are expected to be older depending on distances from fractures, that can be applied to estimate extent and intensity of thermal effects. However, no report has been found that examines long-time heating nor cooling process systematically, and such experiments are needed for this purpose.

Proposal of surveys, analyses and evaluation methods for the effects of heat and hydrothermal water on surroundings of geological repository at the stage of Preliminary Investigation